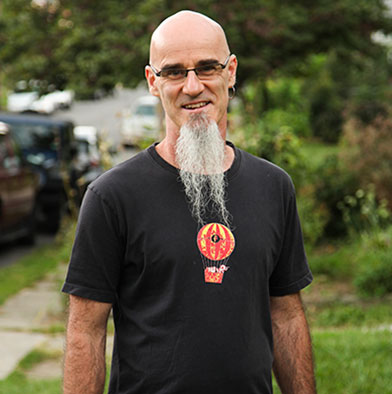 Sean Gladding is a storyteller, pastor, community gardener, backyard chicken keeper and YMCA soccer coach. Sean is married to Rebecca, is father to Maggie and Seth, and they live, love, work and play in the MLK neighborhood in Lexington, Kentucky, where they are part of the Fig Tree Collective. You can read more about his life in the East End here.

Sean’s first book, The Story of God, the Story of Us is an attempt to tell the ‘Big Story’ that unfolds in the pages of the bible. Churches, small groups, colleges and seminaries use it as an introduction to the bible – both for folk who’ve never read the bible, and those who’ve been reading it for years. It was one of Relevant magazine’s Top Ten books of 2010, and is available as an unabridged audiobook, read by his wife Rebecca and himself. His second book, TEN: Words of Life for an Addicted, Compulsive, Cynical, Divided and Worn-out Culture, was also published with IVP.  Sean also contributed to Banned Questions About Christians.