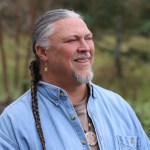 As a distinguished lecturer, teacher and wisdom keeper, Randy Woodley addresses a variety of issues concerning American culture, faith, our relationship with the earth and Indigenous realities. His expertise has been sought in national venues as diverse as The Huffington Post, Moody Radio and Time Magazine.

Randy was raised near Detroit, Michigan and he is a legal descendant of the United Keetoowah Band of Cherokee Indians in Oklahoma. He has been involved in mentoring Indigenous leaders for almost three decades. Randy, with his wife Edith, is a cofounder of Eagle’s Wings Ministry and they are considered early missiological innovators in the Native American Cultural Contextual Movement.

He and Edith, (Eastern Shoshone) maintain Eloheh Farm and Eloheh Village for Indigenous Leadership Development, a permaculture, regenerative teaching farm, school and community in Newberg, Oregon. Randy is also the founder of CHCHEW (“chikoo”) The Coalition for Healing Chinook-Kalapuya Earth and Water.

Through dialogue, speaking engagements and blogging he remains active in ongoing discussions concerning spirituality, racial and ethnic justice/diversity, peace, eco-justice and earth-care, inter-religious dialogue, Indigenous theologies, postcolonial theologies and Christian mission. His most recent book is Shalom and the Community of Creation: An Indigenous Vision, 2012 (Eerdmans). Other books include: When Going to Church is Sin: And Other Essays on Native American Christian Mission, Healing the Land Publishers, Scotland, PA, 2007. Living in Color: Embracing God’s Passion for Ethnic Diversity, Intervarsity Press, 2004.