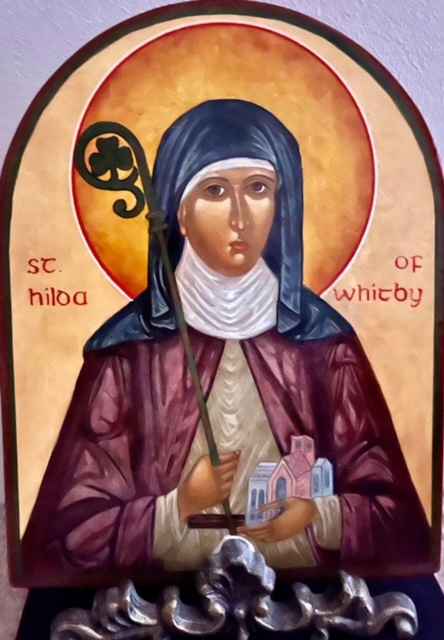 A Cat, An Icon, and A Calling

A Cat. Four years ago, I received a call from a Maine Coon cat breeder of whom I had earlier purchased one of her magnificent cats. She asked if I would like a full-blooded ginger Maine Coon who was four years old. His Mom had become severely allergic to him and could not keep him any longer. Of course I said yes and the unexpected gift of this huge cat with an equally loud, almost roaring purr arrived to our home along with his awesome “castle.” What a wonderful and unexpected gift this precious, very loving twenty-four pound cat has been to our home. I thank God every day and sometimes several times a day for this unexpected gift.

An Icon. Two years ago, another unexpected gift arrived. I opened my mailbox and discovered a manila package with bubble wrap from someone to whom I was only acquainted. As I opened the carefully wrapped package, I was taken by surprise to find the most magnificent icon of my patron saint, St. Hilda of Whitby. I was stunned beyond words and tears overflowed and my soul was both overwhelmed and overjoyed. I could hardly believe that someone paid enough attention on Facebook to notice my admiration of St. Hilda and then to use her exceptional gift of icon writing to make something so breathtaking and meaningful to me. An unexpected gift that is a treasure. I tell my family, if I end up moving to assisted living someday, I won’t be taking much, but the icon of St. Hilda of Whitby is going with me!

It was an unexpected gift when I met St. Hilda for the first time. I was in a mostly male, very theologically conservative seminary and was reading our assigned church history text when my life was turned upside down. The text stated that a woman named “St. Hilda of Whitby” was an Abbess and founder of a monastery in which both men and women lived. Monks and nuns living and serving in her Whitby Abbey in northeast England were under her spiritual and physical rule. After being shocked, stunned, and secretly delighted, this former librarian began researching everything I could find on this religious leader. What an unexpected gift of discovering that women could be religious leaders.

It seems that St. Hilda in some mystical way introduced me to other Celtic and Anglo-Saxon saints of her era of the 7th-8th centuries. I became obsessed with finding out more about these remarkable men and women religious leaders of whom I had never read or heard about. It has been an unexpected gift to research these saints and to develop a website (www.saintsbridge.org) of their life stories. What an unexpected gift to now have friends on the other side of the thin veil.

A Calling. The week that I graduated from a Southern Baptist seminary, I received a call from the Interim Pastor of a Christian Church(Disciples of Christ) in the city where I live. I had never even been in that church nor knew anything about their denomination. He said that my dear Episcopal priest friend, Rev. Dr. Carol Petty had recommended me to him as he needed to go on an extended visit back home. Would I come and serve as the Interim Senior Pastor of the church for the next several months? I accepted that very unexpected gift. I discovered how much I loved pastoring this sweet flock. Later the Interim Pastor returned and I became the Associate Pastor.

When the Interim Pastor’s contract was up and he returned to his home, the church called me to become their permanent Senior Pastor. Wow, what an unexpected gift for this former Southern Baptist woman to become a settled Pastor. It was a joy and an honor to serve this precious congregation for eleven years and then serve several churches as their Interim Pastor. The Spirit works in amazing and mysterious ways, knocking down locked doors, breaking down impenetrable walls, and often sending unexpected gifts. 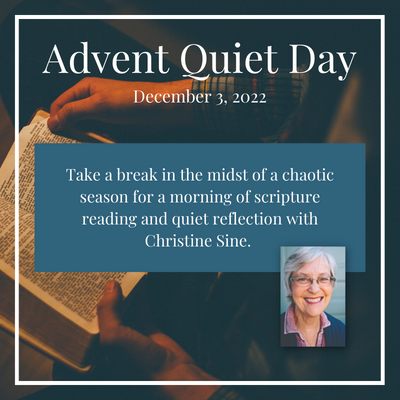 Join Christine Sine for a time of quiet reflection on December 3rd, 2022. Slow down the busyness of the season and nourish your soul with contemplative focus and reflection. All the details can be found here:
https://godspacelight.com/event/advent-quiet-day/