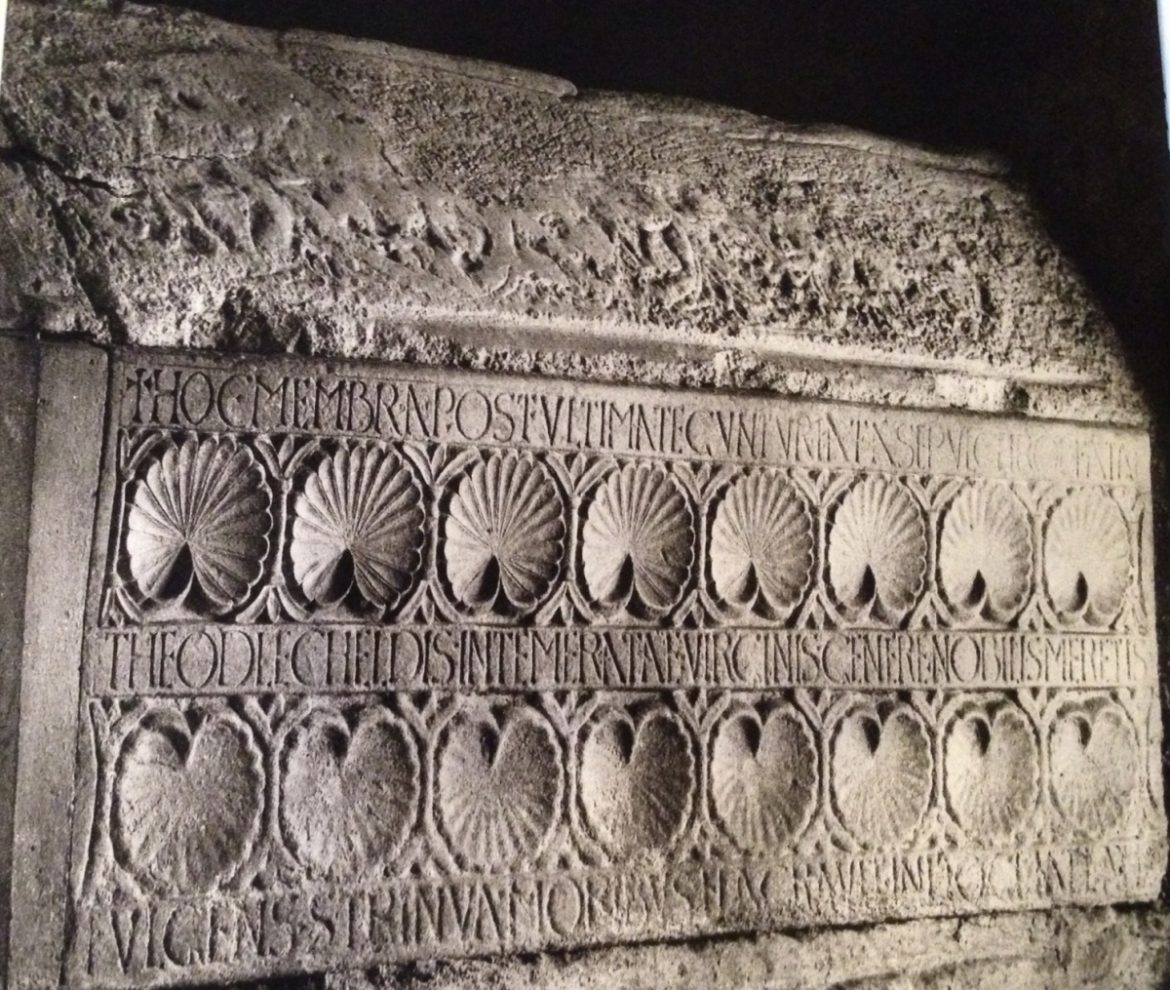 My spouse and I travelled to central France to visit the famous Celtic-inspired abbeys of Faremoutiers and Jouarre that were both founded in the 7th century following the rather rigid Rule of Columbanus composed by the Irish monk Columbanus. I had become enthralled with studying and writing about the early Celtic and Anglo-Saxon saints including Abbess Theodechilde of Jouarre, France and wanted to see firsthand where this saint had lived and served.

7th century Theodechilde (Theodechildis) was born in an area known as Neustria around modern-day Paris. She began her monastic life as a nun in  Faremoutiers Abbey in France which is about 60 miles southeast of the center of Paris. Amazingly, 1400 years later, Faremoutiers Abbey is still in existence even though it has been rebuilt over the years, but on the same grounds. Even though Faremoutiers Abbey was in France, it was described as a double monastery which was a uniquely Celtic way of monastic living.  Double monasteries were religious foundations ruled by an Abbess in which monks and nuns lived on the same monastic grounds, worshipped in the same church, yet lived in separate houses designated for nuns and monks.

Bishop Burgundofaro (Bishop Faro) of Meaux, France wanted to transform Jouarre Abbey which had been established around 630AD into a double monastery.  He must have been a brave Bishop to buck the long-standing Roman Catholic tradition of convents for nuns and monasteries for men, each on their own monastic lands

To accomplish this, Bishop Burgundofaro asked his sister Abbess Burgundofara of Faremoutiers if she would release Theodechilde to become Abbess of the soon-to-be revolutionized monastery. Jouarre Abbey would then be like the double monastery of Faremoutiers Abbey. Theodechilde was released from Faremoutiers Abbey and she became Abbess of Jouarre. This double monastery flourished under her leadership and became so well-respected that one of Abbess Theodechilde’s nuns was sent to become the first Abbess of the newly formed Chelles Abbey outside of Paris and also another of her nuns became the first Abbess of Soissons Abbey.

Even though many of the well-known Celtic and Anglo-Saxon saints have no physical reminders of their burial places, one can still visit the Merovingian crypt beneath the church of Jouarre Abbey where both Abbess Theodechilde and her brother Bishop Agilbert are buried. Agilbert became Bishop of Paris after serving as Bishop of the West Saxons in England and was with the Roman delegation at the history making Synod of Whitby in 664. Each of these two siblings’ sarcophagi are magnificent. Agilbert’s stone sarcophagus has carvings of Christ in Majesty and the Last Judgment. The photo at the top of this post is Abbess Theodechilde’s stone sarcophagus which is carved with scallops along with these beautiful and touching words in Latin that are translated into English:

“This tomb contains the remains of blessed Theodechilde, virgin of noble race, valiant in works, ardent in faith, mother of this monastery. She taught her daughters to run to meet Christ like the wise virgins, their lamps filled with oil. She now rejoices in paradise.”

May these same things be said of us someday, that we too were valiant in works, ardent in faith, and our soul’s inner light was continually filled with the oil of the Spirit.

20 Saints That Hover Over Us as We Cook and Eat