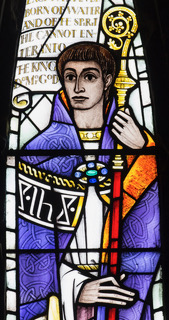 by Rev. Brenda Griffin Warren  This stained glass detail of St. Ninian is from St Mungo’s Cathedral in Glasgow, Scotland and it is by Marion Grant c.1955, photo by Lawrence OP, Flickr. Editor’s Note: St. Ninian’s feast day is celebrated the 26th, tomorrow!

St. Ninian was a British Bishop in Whithorn in western Scotland. This saint was born about 360AD and is considered to be the first apostle to Scotland. Ninian – who is also known as Ringan and Tyrnnian  -was a very industrious apostle, missionary, and bishop, to say the least! He evangelized and conducted preaching missions throughout Scotland and even in the Lake District of England.

Ninian’s monastery that he established was named Whithorn and it was located on the western coast of Scotland. It is said that Whithorn was built of stone painted a gleaming white which was reminiscent of the Roman churches cloaked in marble. Whithorn may have also been named Candida Casa as in Latin it means, “white or shining house.” In Old English this was translated as whit æurn from which was derived Whithorn.

In the 1990s, an archaeological excavation led by Peter Hill was done at Whithorn. This dig uncovered the outline of a circular Celtic monastic area with a number of Christian graves. Also found was a pile of gray builder’s stones covered with a thick skin of calcium carbonate. These stones would have made a gleaming white hut when wet, which would happen being located so near the sea. Also, a wall built of those white stones was discovered.

Ninian was born in the area near the border between modern-day England and Scotland, perhaps near the city of Carlisle and the area near the Roman Hadrian’s Wall. His father was either a priest or the chief of a tribe that held land on both sides of the Solway Firth.

Ninian was educated as a teenager and young adult in Rome and must have spent some time in France as he was an ardent admirer of St. Martin of Tours who had greatly influenced his life.  When he returned to his homeland of Scotland, Ninian brought back two French stone masons with him who would have the knowledge of building stone churches.

Many Irish monks came to Whithorn to study including St. Finnian of Moville who later returned to Ireland and did great ministry there including teaching his most famous pupil, St. Columba of Iona. Ninian paved the way not only for Columba, but also for St. Kentigern  (also known as St. Mungo) in Scotland.

It seems that Ninian must have been a lover of nature as the later St. Francis of Assisi also was. It is said that Ninian would visit the shepherds and their flocks surrounding his monastery. He would gather them all together in one place where he would raise his hand in prayer and with his staff draw an imaginary circle around the sheep and pray over the sheep asking for God’s divine protection.

We know of St. Ninian mainly from Book Three Chapter 4 of Bede’s Ecclesiastical History of the English People. Bede writing 400 years after Ninian (Ninias) says that he knew of Ninian from hearsay and called Ninian “a most holy man.” Some think that the first Saxon Bishop of Whithorn named Pechthelm may have relayed the information about Ninian to Bede.

Pilgrims Begin to Flock to Whithorn

Soon after Ninian died in 432 AD and was buried at his monastery at Whithorn in a stone sarcophagus in the Church of Blessed Martin, pilgrims immediately began to arrive at Ninian’s tomb.  It is written that sick pilgrims were cured, the lepers were cleansed, and the blind received their sight at his tomb. Ninian became the favored saint of the Royal House of Stuart, which further stimulated national devotion and pilgrimage. King James of Scotland even had an arm bone of Ninian encased in silver which was kept at Whithorn until the Reformation when it was taken to France and lost during the French Revolution.

Their devotion for Ninian became even stronger when King James IV of Scotland walked barefoot on a pilgrimage to Whithorn when his wife, Margaret Tudor was thought to be dying. She was miraculously cured and they returned together on horseback to give thanks to Ninian. Their son King James V and their granddaughter, Mary Queen of Scots also made a pilgrimage to Whithorn. Their grandson, King James VI who became King James I of England is the one who encouraged the new translation of the Bible, that we now know as the King James Version of the Bible.

Interestingly, modern-day pilgrims continue to be drawn to Whithorn. There is a cave about five miles southwest of Whithorn that is known as Ninian’s Cave which was probably Ninian’s hermitage where he went on retreat to pray. Inside the cave were numerous stones carved with crosses and even some Pictish-style graffiti. The crosses have been transferred to the Whithorn Priory and Museum. About 13 miles from Whithorn is St. Ninian’s Chapel which marked the place where pilgrims first landed on their way to Whithorn. The Whithorn Priory and Museum provides not only an exhibition and an audio-visual program, but also guided tours of the site.  At the center of the museum is the 5thc. Latinus Stone that is believed to be the oldest Christian memorial in Scotland. 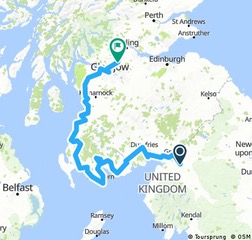 This next map is Whithorn Way. This pilgrimage path is a newly mapped, shorter 143-mile walking and cycling route that is divided into 13 sections, which follows much of the westerly pilgrimage route to Whithorn, travelled by pilgrims for well over 1000 years. The Whithorn Trust website is full of helpful information for future pilgrims to this historic area. 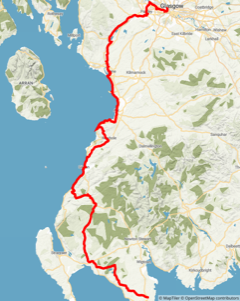 Pilgrimage to the National Museum of Scotland

Another fascinating, yet different kind of  St. Ninian pilgrimage could be to the National Museum of Scotland in Edinburgh. It is open daily from 10am-5pm. In this museum, one can peruse the treasure trove of 28 ninth-century silver and copper alloy objects that were discovered in a wooden box under a cross-incised concrete slab in a church in 1958 on St. Ninian’s Isle. This tiny isle is on the southwest corner of the Mainland of the Shetland Isles that is north of Scotland. St. Ninian is the patron saint of The Shetland Islands and also of The Orkneys that are nearby. There is an interesting video about this treasure trove.

St. Ninian’s life continues to speak to us in the 21st century. Perhaps some of us may have the joy of pilgrimaging to where this saint lived and served as he brought the message of Christ’s love and salvation to the inhabitants of Scotland.

More information can be found about St.Ninian at the author’s website: saintsbridge 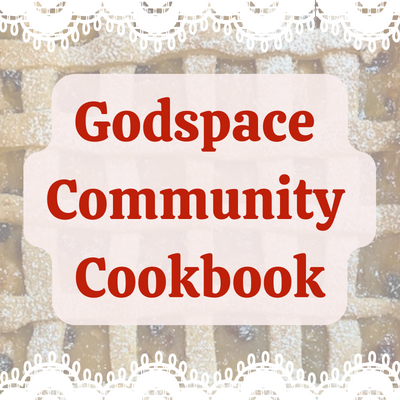 Have you ever had a recipe so delicious, you just knew it was destined to be shared? Well here is your chance! We are collecting recipes across our Godspace community for our first-ever cookbook. Send your recipe written in your own words, where it came from, and why it’s special to you to godspacelight@gmail.com – if you send 3 or more recipes in, you will receive a FREE digital copy of the finished cookbook! For more information check out this post: https://godspacelight.com/2022/08/03/the-great-godspace-cookbook-gathering/