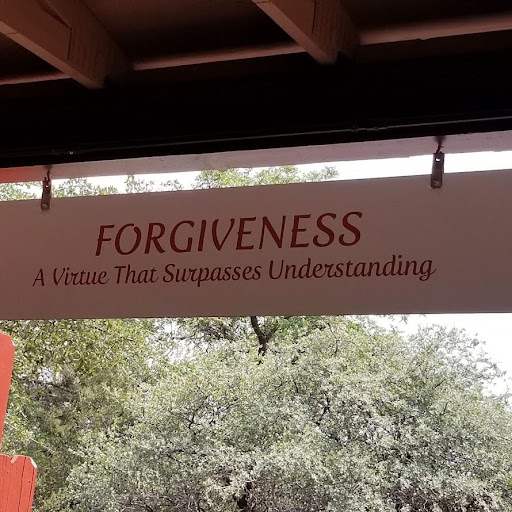 words and pictures by June Friesen, all scriptures given in The Message translation Editor’s Note: We hope this reflection helps you prepare for World Forgiveness Day tomorrow, July 7th!

Forgiveness – a topic that is often a struggle for much if not all of humanity. We admit that it is important to embrace giving and receiving of forgiveness yet it is often one of the greatest struggles in relationships. In most, if not all religions it is something that all people are encouraged to practice and embrace however it probably is one of the issues humanity struggles with the most. Over my lifetime it is something that I have struggled to embrace and practice. I have struggled to really understand what forgiveness is from God’s perspective and how I can truly embrace and live in and through it actively. Many of us may hear talks, sermons, and meditations on forgiveness. There are many books that deal with forgiveness in one way or another. Yet, to really understand how to embrace and benefit from it in our own lives personally is an ongoing challenge. I think the writing on the above photo says it well: “Forgiveness – a virtue that surpasses Understanding.”

It was interesting doing a study on the background of this day. Forgiveness is a challenge most if not all of the time in our lives. Forgiveness also holds tremendous power in one’s life as does unforgiveness. Forgiveness does not come naturally in most situations. Forgiveness is something that one must choose to embrace. It is something that is different with nearly each situation because there are different people, different personalities, different circumstances, different cultures, different feelings and there is so much more. In the Scriptures there is much reference to forgiveness. There is reference to the struggles with forgiveness. There is most of all the revealing of God/Jesus continual, unconditional forgiveness over and over again. If one takes the time to read the Old Testament story, of the Israelite nation there is a continual story of sin, forgiveness and restoration over and over again. The Scriptures reference forgiveness many times and in the New Testament Jesus as well as the apostles taught about it. One of the passages most if not all of us can quote and probably do on several occasions is called The Lord’s Prayer.

Our Father in heaven,
Reveal who you are.
Set the world right;
Do what’s best—
as above, so below.
Keep us alive with three square meals.
Keep us forgiven with you and forgiving others.
Keep us safe from ourselves and the Devil.
You’re in charge!
You can do anything you want!
You’re ablaze in beauty!
Yes. Yes. Yes.

14-15 “In prayer there is a connection between what God does and what you do. You can’t get forgiveness from God, for instance, without also forgiving others. If you refuse to do your part, you cut yourself off from God’s part.

And then a couple of verses from Paul’s writings:

1-3 Live creatively, friends. If someone falls into sin, forgivingly restore him, saving your critical comments for yourself. You might be needing forgiveness before the day’s out. Stoop down and reach out to those who are oppressed. Share their burdens, and so complete Christ’s law. If you think you are too good for that, you are badly deceived. 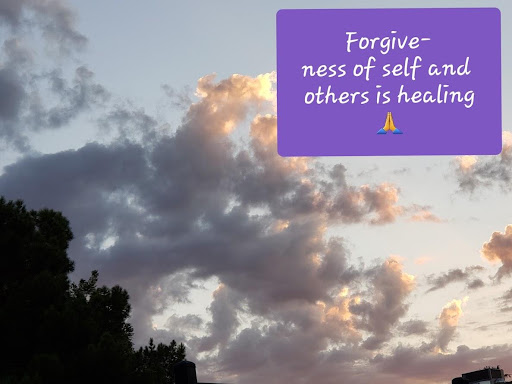 There is a concept of forgiveness as well as an emotion of forgiveness. Forgiveness is not just saying “I am sorry, please forgive me.” Forgiveness also includes action that needs to follow up the apology. For many of us that is where we struggle. In fact, when I was growing up, I often heard this phrase in response to asking for forgiveness: “Yes, I will forgive you but I will not forget.” When one chooses to carry around the baggage of ‘unforgiveness’ in their spirit it becomes a burden. It becomes a cloud that begins to block the Son/Spirit from being the light for our life. And over time it can become a thunderous storm cloud that affects one’s whole being not just spiritually but emotionally and physically as well. Jesus knew this to be true and that is why his teaching on forgiveness not only included accepting God’s forgiveness but also included forgiveness of others. The phrase in the Lord’s prayer that many if not all Christians know and repeat often states: “Forgive us/me as we/I forgive others.” And in verses 14 and 15 Jesus even emphasizes that part of the prayer. Yet for many of us, and I include myself here, they are often just words we speak rather than being something that we practice regularly. We tend to concentrate on only God’s forgiveness of us.

Here are two examples I found on true forgiveness:

“Japanese fighter pilot, Nobuo Fujita, had bombed the west coast of the U.S. over Oregon during WW2, which sparked great fires. The town of Brookings, Oregon, was greatly affected by this. When Fujita visited the town in 1962, he asked for forgiveness and was granted it by the townspeople. Then, in the late 20th century, Pope John Paul II publicly forgave the man who tried to assassinate him and even visited him in prison during his sentence.” (Global Website: https://nationaltoday.com/global-forgiveness-day)

As I reflect on these two examples as well as the Scriptures, I find myself challenged. Many years ago, I met a man one Sunday afternoon who shared a story from his own life of his son who had been murdered. He said he was just returning from visiting the man in prison who committed the crime. He shared how he forgave the man. He attended the trial of this man and after he specifically asked the judge to grant him permission to visit the man in prison. I could see the joy he had found through embracing true, godly forgiveness. I have never forgotten that man’s story and it continues to challenge me to this day when I feel I have been wronged by someone. As well, when I recite the Lord’s Prayer – I remind myself that I must take the words that I speak seriously, especially when I am speaking to God.

So how can one forgive? Is it possible to forgive? And if it is not possible than why did Jesus specifically tell us we needed to forgive to truly experience the power and full experience of His forgiveness of us?

Many years ago, someone challenged me to write letters of forgiveness. I did not necessarily need to send them because the person may no longer be alive, or one did not want to and/or have contact with them etc. Then lift the letter up to God surrendering the feelings, the hurt as well as the person to God, claiming God’s healing. I did that and found it to bring healing into my spirit. I went one step further; I began writing letters to God – in fact for many years I wrote my daily prayers to God. These practices have helped me begin to embrace the presence of God alive within me. Yes, and embracing and really feeling the presence of God alive within me has helped me grow into a life of love – as when one begins to embrace forgiveness love becomes the fruit.

Today I hope you have found encouragement and as well as maybe challenge here. Below is a rock garden I created and had on my table for a number of months – yes there is a stone with forgiveness on it even though it is not prominent. What is more prominent is the stones with the fruits that come from living a life of forgiveness. It is my prayer today that you will find a way to truly embrace and celebrate this day in your life not just today but every day to the glory of God. Amen. 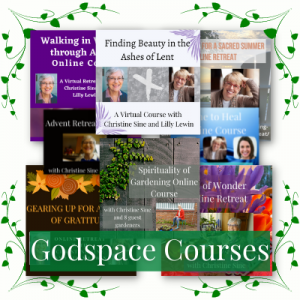 Looking for some inspiration? Consider one of our courses! Most offer 180 days of access, perfect for working through a virtual retreat at your own pace. You can find them all right here! And did you know? We offer discounts if you have purchased a course or virtual retreat from us before or are buying for a group. Email us before check-out for the code!

Artful Julybilee: Towards Peace For All Creation