Have you ever had a dream that you thought could change the world? Well, maybe not the whole world but at least a significant part of it. John Flynn, known in Australia as Flynn of the Inland was one such man. He died not long after I was born, but stories of his accomplishments in establishing what is now the Royal Australian Doctor Service, the first air ambulance in the world, were the backdrop of my childhood and never ceased to inspire me. His face appears on the back of the Australian $20 which gives an idea of how influential he was in the forming of our country.

The Royal Australian Doctor Service was not the only one of his accomplishments however. He was ordained as a Presbyterian minister in 1911 and wandered the outback alone on camelback, covering thousands of dry thirsty miles through the harsh Australian Centre, dreaming dreams for his beloved Red Centre. His parish was one of the largest in the world. He visited isolated stations (ranches) all over Central Australia, his heart aching for the isolated and lonely people who dotted the land. He dreamed of a “Mantle of Safety” a medical care and communication system available to all these isolated communities but the technology to make most of this possible did not exist at that time.  He did not give up however. He continued to dream, even when those around him thought he was crazy. He persevered, inspired a small group of fellow dreamers and slowly started to see change come.

First there were the bush hospitals with one or two nurses reaching out to the even more isolated communities they served with whatever transport they could find. Sometimes wading through floods to get to them. They were often the first women in the community and brought change not just because of their medical skills but because they often transformed the men by their presence.

Ironically it was WWI that made the next part of the dream a reality. The small aircrafts used during that war made flying doctor services possible, though it was not until 1928 that the first base was established.

The hardest dream to fulfill was a wireless network to help connect the isolated communities. Flynn’s dream inspired Alfred Traeger to experiment time and time again until finally a small inexpensive wireless transmitting set. The generator that supplied the power for the transmitter was operated by foot, like a bicycle, and could generate about 20 watts of power. It was simple enough to be easily mastered by isolated bush mothers and fathers who could finally communicate rapidly with the outside world.

John Flynn accomplished his titanic task and fulfilled his dreams, ringing the entire northern half of the Australian continent with his “Mantle of Safety”: the Bush Hospitals, the Flying Doctor Service, the longed-for transport and communication, that have saved and continue to save many valuable lives and banished the deadening isolation of lonely men and women.

He believed that no God-given dream was impossible. Perseverance, hard work, and a group of creative collaborators could indeed change the world even if you had to wait years for the appropriate technology to be invented to accomplish it.

I first read about this incredible man in Ion Idriess’s book Flynn of the Inland and the impact of his story remained with me throughout my life. He laid the seeds for my desire to not only become a doctor but to also be able to change the lives of those who had no access to medical care. He was a man who truly lived like Christ lived, and encouraged others to do the same without ever preach at them.

Who are the amazing people from your past who helped set the trajectory of your life because of their dedication and perseverance? Make a list and offer up a prayer to God. 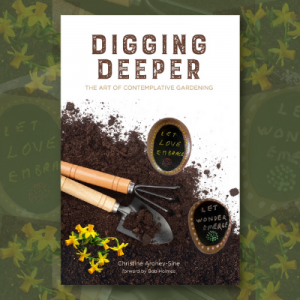 Christine Sine’s latest book is packed full of contemplative wisdom and inspiration for creating your own meditative focus. Whether a beginner or an expert gardener, enjoy the process alongside Christine! Click for more details!