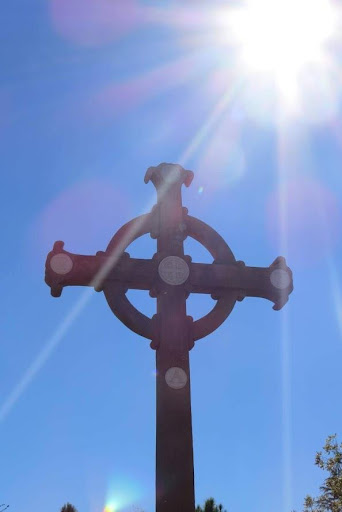 photos and writings by June Friesen, all scripture given in The Message translation

This day is set to commemorate the deaths of two of the first apostles of the Christian church. Even though Paul was not one of the original disciples, after his dramatic conversion he was called an apostle.

As I was considering the lives of both the Apostle Peter and the Apostle Paul, I realize that they are two men who contributed greatly to the spread of the Christian church in the world as it was known in their time. They were both in many respects disliked greatly by the Roman government and leaders as well as the people of Israel, especially the religious leaders of the Jewish people. Today I would like to reflect on a few verses first from Peter and then from Paul to encourage each one of us in our remembering of them, to also take up the challenge they gave: to stand true to Jesus and live totally for His cause.

Peter, who was with the group of people awaiting the descent of the Holy Spirit, was empowered with great wisdom as well as a very bold spirit and he took no time to begin to address the people after the Holy Spirit descended and empowered Jesus’ followers. Here in Acts 3 he calls for the people to come and believe, follow the ways of Jesus and find rest and peace for your spirits.

19-23 “Now it’s time to change your ways! Turn to face God so he can wipe away your sins, pour out showers of blessing to refresh you, and send you the Messiah he prepared for you, namely, Jesus. For the time being he must remain out of sight in heaven until everything is restored to order again just the way God, through the preaching of his holy prophets of old, said it would be. Moses, for instance, said, ‘Your God will raise up for you a prophet just like me from your family. Listen to every word he speaks to you. Every last living soul who refuses to listen to that prophet will be wiped out from the people.’ 24-26 “All the prophets from Samuel on down said the same thing, said most emphatically that these days would come. These prophets, along with the covenant God made with your ancestors, are your family tree. God’s covenant-word to Abraham provides the text: ‘By your offspring all the families of the earth will be blessed.’ But you are first in line: God, having raised up his Son, sent him to bless you as you turn, one by one, from your evil ways.”

When I consider Peter and Paul particularly, I picture a couple of rather rough-and-scruff-looking men. I definitely do not picture them as three-piece suit and tie kind of people calling others to come to the synagogue/Temple to hear a sermon about the Messiah. No, rather they go to where the people are or where they know the people will come and gather to listen to them. Both Peter and Paul were well versed in the scriptures that were then available as they would have heard them expounded in the Synagogue/Temple. We also know that the scribes and Pharisees followed Jesus around listening to Him and His teaching. They did this it tells us so that they could try and catch Him teaching false things about the Law and Old Testament Scriptures. In this passage Peter is pleading with the people to consider, to think seriously about all of the recent events in their community. Can you not understand even a little bit what Jesus tried to tell you? Will you not open yourselves now to His Spirit and come believe in Him as ‘your Messiah’ today? Before I go further let me share a few verses from Paul that I also really like.

In Acts 9 we have the account of Saul meeting God/Jesus as he was on his way to the city of Damascus to wreak havoc on the Christians there. Many if not all of us know this story readily of God’s blinding visitation on the road as Paul was traveling on his way to lead a persecution of Christians in Damascus. I choose some verses immediately after Saul’s change of heart as well as a couple of verses from Philippians that are favorites of mine from childhood.

19-21 Saul spent a few days getting acquainted with the Damascus disciples, but then went right to work, wasting no time, preaching in the meeting places that this Jesus was the Son of God. They were caught off guard by this and, not at all sure they could trust him, they kept saying, “Isn’t this the man who wreaked havoc in Jerusalem among the believers? And didn’t he come here to do the same thing—arrest us and drag us off to jail in Jerusalem for sentencing by the high priests?” 22 But their suspicions didn’t slow Saul down for even a minute. His momentum was up now and he plowed straight into the opposition, disarming the Damascus Jews and trying to show them that this Jesus was the Messiah.

14-16 Do everything readily and cheerfully—no bickering, no second-guessing allowed! Go out into the world uncorrupted, a breath of fresh air in this squalid and polluted society. Provide people with a glimpse of good living and of the living God. Carry the light-giving Message into the night so I’ll have good cause to be proud of you on the day that Christ returns. You’ll be living proof that I didn’t go to all this work for nothing. 17 Even if I am executed here and now, I’ll rejoice in being an element in the offering of your faith that you make on Christ’s altar, a part of your rejoicing. 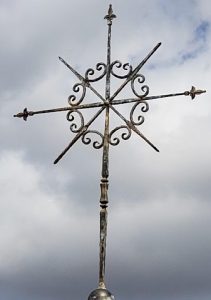 Saul, who from here on I will refer to as Paul had an incredible change of heart as well as attitude. Another thing that I gain from Paul is that his enthusiasm and determination to spread the truth about Jesus was equally as strong in face of the opposition that he now faced from the Jewish persecutors where he had once been the leader.

So how may you and I celebrate/commemorate the lives of Peter and Paul today in 2022? How can we show respect for them and all that they did for the Christian faith that we now embrace? You may have already noticed that I have chosen photos of crosses to be a part of today’s thoughts. It is because history holds that both Peter and Paul met their deaths at the hands of the Romans by crucifixion. Peter, who did not want to be crucified like Jesus, His Lord, asked to be crucified upside down.

I believe that as we choose to remember these two apostles and how much each one of us have benefitted by the lives they lived as well as the recorded letters that they shared with the early Christians we can find strength and courage to face struggles in our lives today. So often I have heard people say that when one chooses to become a follower of Jesus their lives will be so much better as they will have assurance of living in heaven after their earthly death. However, when I look at the followers of Jesus in the New Testament their lives were anything but easy. They were filled with struggles, persecutions, false accusations, prison time and martyrdom. Yet over and over these men stood strong and said that they were only preaching the truth from God/Jesus through the Holy Spirit. So, as we take time to reflect on the lives of Saint Peter and Saint Paul let us be encouraged as well as challenged by their examples to also stand strong in our faith walk with God. 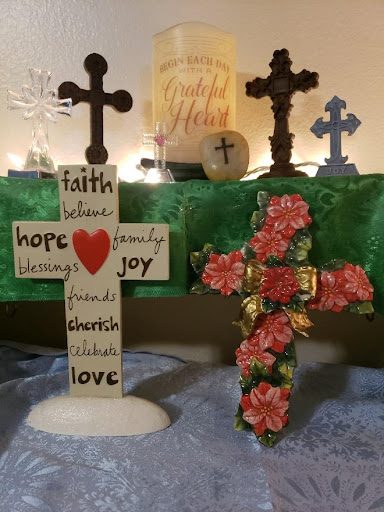 Today I have shared with you some photos that I have taken of crosses. Actually, the blue cross I created out of a photo I took of an old door recently. The final photo is of an altar area in my home where I have placed several crosses I have collected over the years. I am doing this intentionally during this month to remind me of what Peter and Paul faced as early believers yet they remained true to God. May God give each one of us the ability to stand strong and true for God in today’s world as well. Amen and amen. 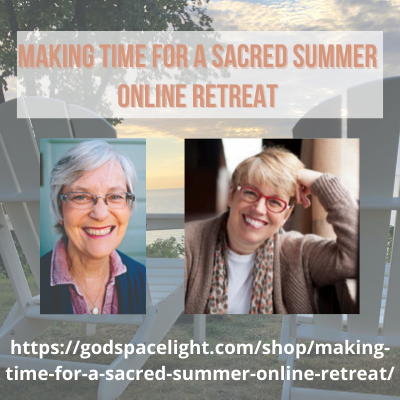 How will you make space for God this summer? We all need to refuel after a crazy year. What if we plan to make this year into a Sacred Summer?

Available as an online course, sign up here to gain 180 days of access while you work through this retreat at your own pace. Join Lilly Lewin and Christine Sine in the awe of the broad array of summer symbols that can gain spiritual significance for us when we stop and think about them. Everything from beachcombing to putting on suntan lotion can be the inspiration for practices that draw us closer to God.

Ground yourself in the earth and its summer season where you live and find the ways that God is speaking through it – all the details can be found here!