I still remember the weather that spring day, the merest hint of blossom in the air, as I planned next year’s crops in the fields. And I remember the way my heart caught as I saw him come towards me, as it always did. But he could not meet my eyes. Because, as I later found, he hadn’t come just to be with me in the fields as I’d hoped, but to ask for 1/3 of everything. His inheritance.

I didn’t feel the rejection or the insult though I knew they were there. I just felt the pain, as though my heart had been ripped out. He thought he could live better independently of me. And I knew it was a catastrophic misuse of freedom. but I had to let him go, to give him the choice. So I gave him his share.

I stood and watched him step by step leave across the fields, stepping away from me, and my heart was torn in two again.

There were, of course, rumours from where he had gone, told to me with either relish or regret. Rumours that he was living contrary to everything we had taught him, a way not for his best, resulting in humiliation for him, and a depth of pain he would not have had – and I would not have had – if he had stayed in my house. He thought he was finding freedom but he was finding only slavery.

Daily, hoping against hope, I watched, searched the road, imagining I could see him coming.

Daily I looked at the place at the table that was his, keeping it laid each day because it was still his.

Daily I wept tears for him.

And then one day, worlds away, he realised he had run out of his own resources.

Away in that far place he fell to his knees.

And he turned for home. He had run out of everything. Better a servant than an exile.

And so, as I scanned the horizon, as I did every day, at last I saw him. A sad, forlorn figure in the distance. I knew he must have been desperate to come back but I did not care.

My heart caught as I saw him come towards me, as it always did.

What else could I do? I ran to him.

And I knew I could have added to his pain with careless or accusing words, but I saw the terrible brokenness behind his eyes, pleading for some servant role.

Servant! Not my son.

Instead, I lavished my love on him…

The best robe, a sign of dignity and honour, proof of his acceptance back into the family. I’d had it made while he was away, ready for his return.

A ring for his hand, a sign of authority and sonship despite his failure.

Sandals for his feet, and feasting with the fatted calf I had been saving in hope

Such joy, such joy in my heart. I could not wait to celebrate.

But, even as the party continued, I knew someone was missing. My other son would not come to the party, and so I went to him.

My heart caught as I saw him, as it always did.

It was his duty to host the party, as the oldest son, to seek reconciliation between my son and me. But anger and resentment was in every pore, exuding his rage at his brother, and at me.

But I saw too the terrible brokenness behind his eyes, pleading to be the best, for the approval he’s always had without needing to do anything.

But I was also sad. Sad that instead of going to find his brother and bring him home he had stayed in safety and become so hardened. Looking at him the terrible realisation dawned … if my younger son had met his older brother first, not me, he would never have come home.

I cried for both my sons that night.

My hurting sons, neither of whom had caught my heart.

The younger, who missed all those years of my love for him; for all the regret he would carry despite my full and free forgiveness.

The older, feeling he had to earn his place in my family; to work and work rather than rest in my love for him; too busy protecting his own interests, his seat at the table, to go and look for his lost brother – too self-interested to even want to see him as his brother.

Too afraid of the muck of the pig sty.

His heart too small to reach out.

I cried for both my sons that night: for the path of self-discovery and moral conformity which had trapped them both.

I cried for both my sons that night. 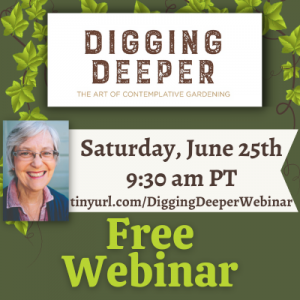 Join Christine Sine for a FREE Webinar on Saturday, June 25th at 9:30 am PT as she discusses her brand-new book and invites you for some fun activities and discussion. If you sign up before June 24th at 9 pm PT, you will be automatically entered into a *giveaway* for Digging Deeper – for giveaway details, visit tinyurl.com/diggingdeepergiveaway or click here. For webinar details and to sign up, visit tinyurl.com/diggingdeeperwebinar or click here.

FreerangeFriday: Invited to Rest or “Everyone is nicer after a nap and a snack”