Editor’s Note: This is a repost of a Meditation Monday found here.

Last week for Pentecost Sunday I decided to walk around my garden photographing all the red flowers to fill my life with a little Pentecostal fire. It was so much fun. There were red roses and poppies, geraniums and lupines, and my stunning epiphyllum cactus orchid flowering in all its magnificence on my front porch. Then around the neighbourhood I saw red rhododendrons, camellias and lilies. Such a display, so much diversity. I couldn’t help but chuckle at these fiery displays that seemed to cry out “happy birthday to the church”. 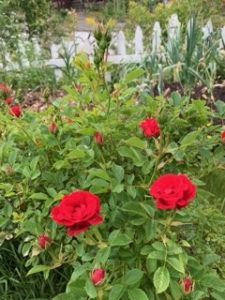 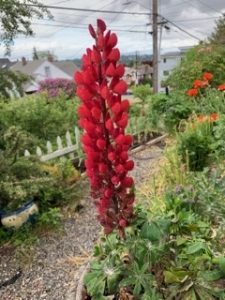 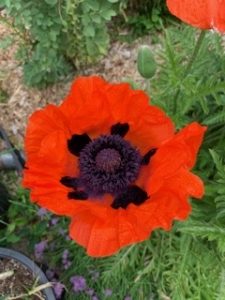 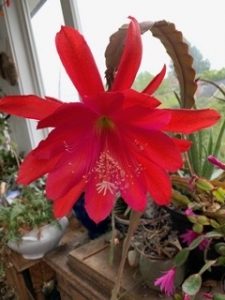 This week, as we celebrated Trinity Sunday yesterday, I decided to look for flowers and leaves with a tripartite structure that reflected the three in one nature of the Trinity – God is One in three – Father, Son and Holy Spirit. It was a great deal of fun and it emphasized for me yet again how much we miss out on when we don’t know how to connect the glory of creation to the story of our faith.

The most familiar trinitarian symbol is the Irish shamrock, Oxalis acetosella, with its three-lobed leaves, which St. Patrick supposedly pointed out to the Irish as a symbol of the true Trinitarian God of whom he preached to them, and in whose name he blessed nature to sanctify it. I prefer the brilliant display of this purple shamrock, however. 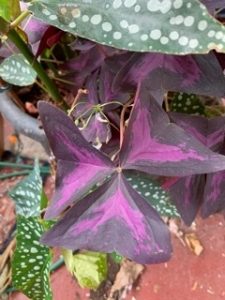 There are lots of other plants that bear the Trinity symbolism too, many of them with three-petaled flowers that represented Father, Son and Holy Spirit.

My favourite is Trillium grandiflorum, a native of north-eastern and north-western U.S. known as the Trillium lily because it is said to symbolize the Trinity. Both its flower and leaves are tripartite – talk about wonderful imagery for us to meditate on. 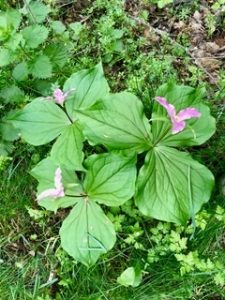 Other plants bear the Trinity symbolism too, from their three-petaled flowers. In Europe, the wild pansy, or johnny-jump-up, viola tricolor, was also widely known as Trinity Flower – for the three colors of each of its flowers, from which familiar present-day larger pansies blooms have been bred with one or two colors usually dominant. 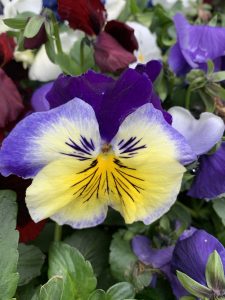 An interesting aspect of bred pansy strains is that though one colour may dominate, the other two colors are always preserved at the centers of the blooms. Thus, pansies of yellow dominance may be seen to symbolize the glory of the heavenly Father; purple: the sorrows of the incarnate Son; and white: the light of the empowering Holy Spirit – with the other colors in each instance always retained at the center, serving to remind us that whenever one of the Persons of the Trinity is present the others are present also, in the unity of the Godhead of love. What a delight to walk around my pansy display and examine this aspect of their beautiful sunny faces.

I was amazed to discover that Aloe vera, that great healing plant, also known as a miracle plant, burn plant, first aid plant, lily of the desert, jelly leek, plant of life and plant of immortality because of its many uses can also be seen as a symbol of the Trinity. Its Trinity symbolism refers to the characteristic successive emergence of new foliage spears from the base of young plants in groups of three – first two beginning spears, and then a third one between them – reflecting the emergence of the Holy Spirit from the Father and the Son in the interior of the Trinity.

Today I discovered that the strawberry plant with its beautiful serrated tripartite leaf was another plant used to teach about the Trinity. 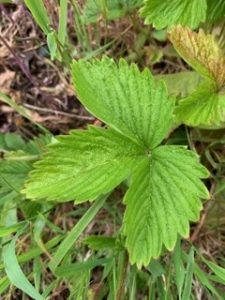 There are many other plants that have Biblical significance – some of them because they are mentioned in the Bible, others because they have been associated with various aspects of the Biblical story, and now I find that every time I look at a flower or the arrangement of new leaves on a plant that I am looking for that trinitarian pattern. How about you? When was the last time that you looked intentionally at a plant with the hope of once more finding the imprint of our Triune God?

Maybe you don’t get as excited about garden plants as I do, but perhaps there are other symbols that speak to you of the nature of God and encourage you to draw close and worship. Even our finger with its three bones was used as a representation of the Trinity by Celtic Christians as is evident in this Celtic prayer.

I love connecting the symbols of our world and daily life to the biblical story and encourage you to do so too. If you have never done this before or even if you have, I encourage you to check out our Sacred Summer retreat, which is an online course where we explore other fun symbols through which we can enrich our relationship with God. 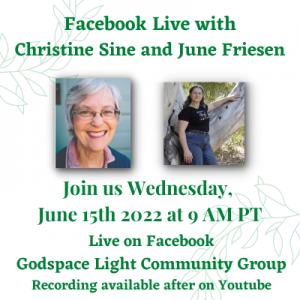 Join Christine Sine and June Friesen live in the Godspace Light Community Group for a Facebook Live discussion on what inspires June’s photography and daily reflections. Can’t join live? Keep your eye on Christine’s YouTube Channel for the recording to be uploaded later!