Meditation Monday – For the Joy Set Before Him Jesus Endured… 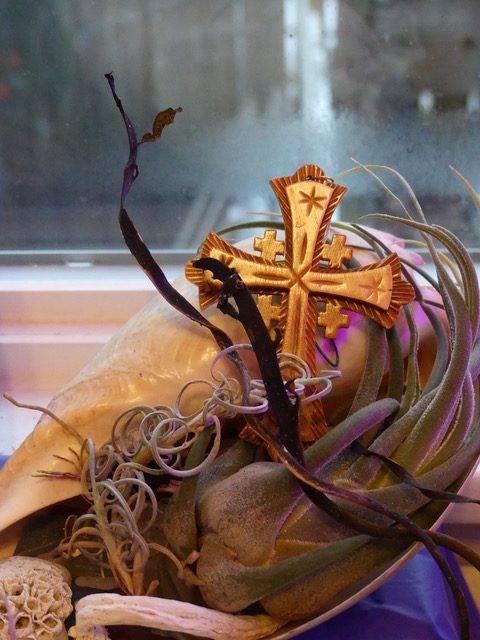 For the joy set before him he endured the cross,(Heb 12:2)

Last week I talked about the tears of blood Jesus shed and the agony he endured, but this week “the joy that was set before him” has held my attention because the expectation of the healing and restoration that his sacrifice would bring to all humanity and in fact to the whole world is, I am sure, what held Jesus’ attention for a lot of that final week of his life.

For the joy that was set before him, Jesus paraded into Jerusalem on that fateful Palm Sunday, knowing that it would totally alienate him from the Roman rulers who were also coming to Jerusalem with all their pomp and ceremony to demonstrate their power and might at the upcoming Passover feast. I love to imagine this joyful parade, with kids dancing and singing and their parents waving palm fronds and shouting hosanna, probably dancing and singing too. I wonder if at times Jesus got down to dance with them. Certainly no pomp and ceremony but as one of the people.

This was a joyful celebration of hope and expectation, a glimpse of God’s eternal world of joy and wholeness that was to come. Yet for Jesus there must have been sadness as well. He knew how fickle these crowds were. He knew that in a few days they would reject and crucify him. Yet for the joy that was set before him he entered into their joy and endured what was to come.

For the joy that was set before him, Jesus goes to the temple, overturns the tables, and heals the sick, further alienating the Jewish leaders and priests. Here too we catch glimpses of the joy that was set before him as the children circle around singing and shouting “Hosanna to the King” (Matt. 21:14,15) I love that the children were filled with the joy of what Jesus was doing. I think that they were the only ones who really delighted in the wonder of what he was doing. It certainly seems as though they are the only ones shouting hosanna now. Where I wonder are the adults that a few hours ago were shouting with them?

Then for the joy that was set before him, Jesus celebrates what he knows will be his last Passover with his disciples, enduring what must have been a bitter-sweet celebration for him, knowing that in one of his companions was the seeds of betrayal. The joy of feasting with his friends must have been tinged with the knowledge of Judas’s treachery.

For the joy that was set before him, Jesus endured the agony of his prayers in the garden of Gethsemane. Theologian Willie James Jennings said “I look at joy as an act of resistance against despair and its forces.” I know he entered into the full extent of the sorrows of the world as he literally wept tears of blood. But I also think he spent time savoring the joy that was set before him as he remembered the glimpses of God’s joyful world he had experienced and brought into the lives of others through his healing, feeding and teaching. Part of his resistance to all the pain and suffering he would endure was his joy at the thought that through his suffering all pain, not only in his life but in the entire world was being vanquished by his sacrifice.

For the joy that was set before him, Jesus endured the cross. With Jesus’ arrest and crucifixion, there must have been a loss of joy, not just for him but for his followers too. Joy seemed to have gone out of all the world. Now there are no shouts of hosanna, not even from his disciples. This was a time for endurance and a willingness to accept the path laid out for him.

Then came Easter Sunday, the day of resurrection and the return of joy to the world. This was the birthing of the full joy that Jesus looked forward to. This was the joy of a new world healed and made whole through his suffering. Once again there are shouts of hosanna at least by his disciples. Hosannas that echo through the centuries as we now join in with their shouts of praise. I think of that as I remember the suffering of the Ukrainian people. They are enduring this horror because of their hope for a joy-filled future in which their country is liberated from the bondage of oppression and set free.

Cole Arthur Riley reminds us when the temple of God is rebuilt after being destroyed during the exile that the people celebrated with joy but the elders wept because of their memories of the original temple. “No one could distinguish the sound of the shouts of joy for the sound of weeping, because the people made so much noise. (Ezra 3:13, NIV)

As Cole Arthur Riley says “I have found no better portrait of joy. Sorrow and celebration all mixed together in a holy cacophony. A collective so loud that weeping and laughter are made one. A sound so loud that it is heard by others, even those far away.” (This Here Flesh, 169)

I can imagine that God’s eternal world is a little like that. The sorrow and celebration are mixed together to create a cacophony of sound. Jesus’ hands are still scarred as are all of us, but bubbling up inside is the exuberant joy of the seeds of a new world birthed.

Today I look out on our cherry tree, now in full bloom and I rejoice at the beauty of it, as I do at the beauty of all the glorious spring flowers around Seattle. This Easter season, this season of blossom and greening is one that is birthed out of the darkness of winter but it is only a beginning, just as Jesus’ resurrection was. Springtime offers us hope for a future abundant harvest. Similarly, Jesus’ fortitude offers the hope of a future of abundance of healing and justice and peace. The full joy that Jesus’ endurance gave birth to is yet to come. Hallelujah. 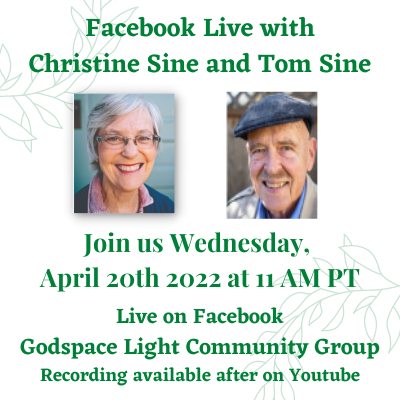 *Note the Special Time!* Join Christine Sine and Tom Sine for a FB Live discussion about Earth Day on Wednesday, April 20th at 11 am PT. You can join us live in the Godspace Light Community group, or catch us later on YouTube for the recording!

A Contemplative Service In The Spirit of Taize for April 10, 2022