by Brenda Griffin Warren Photo by G Freihalter: Abbess Burgundofara with her crozier representing the leadership of her Monastery and Abbey. Stained Glass at Eglise Saint Sulpice à la Celle-Sur-Morin.

As female followers of Christ, some have been taught that women are to be submissive and quiet. Likewise, men are to be tough, strong leaders, and the power-brokers. It is a quandary with which many women of faith struggle.

Faremoutiers Abbey located near modern-day Disneyland Paris was likely the first double monastery in France. These Celtic double monasteries began in Ireland and they were places where both monks and nuns lived on the same monastic grounds under the Rule of an Abbott or Abbess as the Religious head.  The nuns and monks lived in separate quarters, but often worked and worshipped together.

When Burgundofara was a child, St. Columbanus, the famous Irish monk, visited in her home and blessed and dedicated her to God. This left such an indelible mark upon her soul that she resisted her parents’ attempts to force her to marry a few years later. Burgundofara spoke boldly to her father about becoming a nun. She said to him: “To lose my life for the sake of virtue, and fidelity to the promise I have made to God, would be a great happiness.”

As founder and Abbess of Faremoutiers Abbey, Burgundofara grew into a strong leader who was not afraid to speak her mind. Those who lived on her monastic grounds discovered that she was both tough and tender.

Interestingly, it is recorded by the 7th c. writer Jonas of Bobbio that a monk named Agrestius from one of Columbanus’ monasteries “felt called” to mansplain Burgundofara concerning his thoughts on how she was not being a good Abbess. He castigated her for using the Rule of Columbanus (of which he did not approve) in her monastery. Well, let’s just politely say…he met tough.

This is how Jonas of Bobbio recorded that historic confrontation, “Agrestius then made his way to Burgundofara to try if he might defile her with his insinuations. But the virgin of Christ confounded him, not in a feminine manner, but with a virile response: “Why have you come here, you confuter of truth, inventor of new tales, pouring out your honey-sweetened poison to change healthy food into deadly bitterness? You slander those whose virtues I have experienced. From them I received the doctrine of salvation. Their erudition has opened the way to the kingdom of Heaven for many. Recall the words of Isaiah: ‘Woe unto them that call evil good and good evil.’ Hurry and turn wholly away from this insanity.”

Each time I read this, I want to yell out, “Bravo, Burgundofara!“

She was known for not only her personal courage, strength, and toughness, but also for her tender care, counsel, and devotion for those at Faremoutiers. Jonas of Bobbio wrote that after serving as Abbess of Faremoutiers for thirty-seven years, Burgundofara had a fever and “died.” She was so tough that somehow, she managed to come back to life after visiting the heavenlies and was told she had to make restitution with three nuns whom she had hurt. She received their forgiveness, lived six more months, and then prophesied of her date and time of death. When she died in 657AD, it was recorded that her body smelled of sweet balsam.

A solemn mass was held thirty days after Abbess Burgundofara’s final Resurrection Day. Hopefully, it is not blasphemous to ponder that they waited this long to ensure that she would not come back to life. Her Will (Testamentum) confirmed that all the servants she had freed in her lifetime would continue to be free.

The Faremoutiers Monastic grounds still exist, 1400 years later. Sadly, the French Revolution destroyed her monastic buildings, but in 1931, a group of Benedictine nuns came to reoccupy a building on the very spot of the ruins of the old abbey. A few nuns still live and serve there.

Yes, Abbess Burgundofara was a strong, powerful, and deeply spiritual leader. She was both tough and tender.

Her feast day is April 3.

Here is a link if you would like to read more about Abbess Burgundofara and Faremoutiers Abbey. 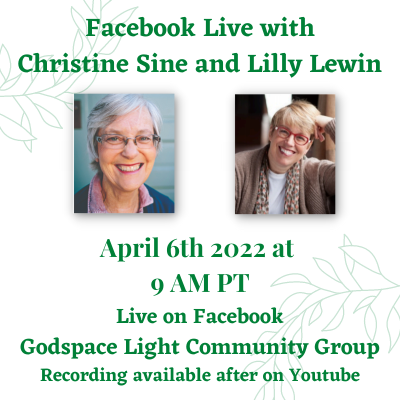 This upcoming Wednesday, April 6th, join Christine Sine and Lilly Lewin for a discussion on the injustice of Holy Week. Live on Facebook in the Godspace Light Community Group at 9am PT. Can’t join us live? Catch it later on youtube!

A Contemplative Service for April 3, 2022

Let’s Get Creative With Our Palms!