St David – Be joyful, keep the faith and do the little things for God 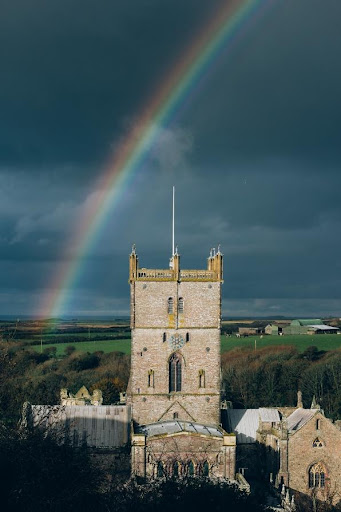 I have always wanted to visit the smallest city in the UK – St David’s in Wales, with a population of just 1,600 people. It has a beautiful cathedral and is named after the patron Saint of Wales whose saint’s day is celebrated on 1 March. Recently I was delighted to discover that David had a distant connection to Northumberland, the most northerly county of England where I live. Seemingly his grandfather was the great King Cunedda of the Votadini (also known as the Goddodin) who populated the east coast north of Hadrian’s Wall as far as the River Forth in Roman times. Cunedda and his warrior band moved from their tribal homelands to North Wales in the early 5th century. This migration is believed to have been motivated by battles in the North and/or the invitation by the Welsh to help them to repel Irish raiders.  Whatever the reason, it was part of the violent times after the Romans left Britain around 407 AD.

David’s birth was shrouded in mystery as his mother, St Non was a nun who was raped and abandoned by one of Cunedda’s sons. David was reputed to have been born in a storm, and some believe it was a miracle that he survived – but despite his difficult start in life it seems that David was as people said ‘under the eye of God.’ He was a clever boy and, after being cared for by his mother in his early childhood, when he was older he was sent to a monastery for his education.  He learned easily, and as a young man he studied under St Paulinus of Wales who was cured of his blindness by David. After becoming a priest David traveled all over the country as a missionary later settling with a band of brothers at what is now St David’s where they lived and worked as a community. He and his fellow monks were vegetarians living on a basic diet, drinking water from a nearby spring and cultivating healing plants. 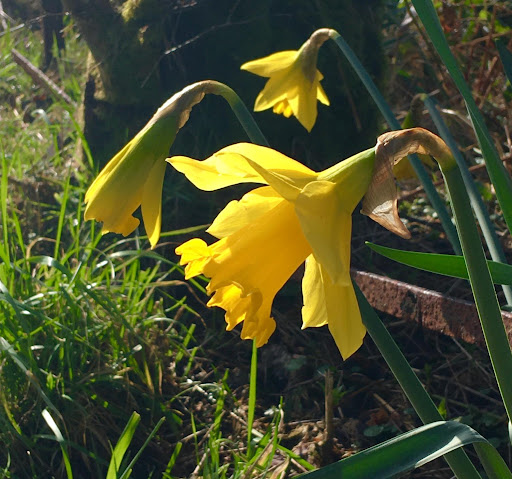 David was known as a great preacher and words from his last sermon were preserved and have encouraged Christians down the ages:  Be joyful, keep the faith and do the little things for God.

As a member of the Companions of Brother Lawrence, whose aim is trying to practice the presence of God in daily life, this reminded me of Brother Lawrence’s thoughts on keeping close to God: ‘We ought to act very simply with God, speaking familiarly with him and asking for God’s help in situations as they arise. God would not fail to give it.’

Sometimes if I feel that the problems that face our world today are overwhelming me, it’s good to remember that David too lived in very turbulent times and take to heart these simple words: Be joyful, keep the faith and do the little things for God.

When we feel that the small things we do can make little difference – a smile and a thank you to a weary shop assistant or busy bus driver, making a cup of tea for a harassed mum, sending a card to someone who is lonely or under the weather – or that our faith is too weak, we need to recall Jesus story of the mustard seed, how the kingdom of heaven starts from small beginnings: ‘The mustard seed is the smallest of seeds but when it has grown it becomes larger than all the plants in the garden, so that the birds of the air come and make nests in its branches.‘ (Matt 13:32 ESV)

A Mustard seed prayer (for the down at heart): 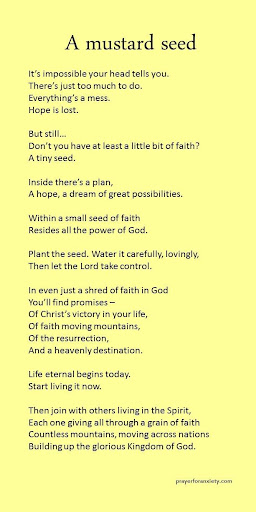 Maybe you would like to take time to rejoice in your faith and think about what little things you might do for God today. 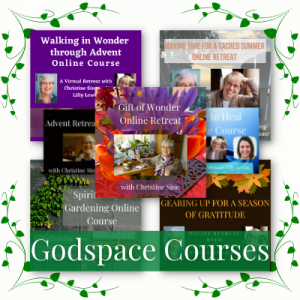 Looking for some inspiration? Consider one of our courses! Most offer 180 days of access, perfect for working through a virtual retreat at your own pace. You can find them all right here! And did you know? We offer discounts if you have purchased a course or virtual retreat from us before or are buying for a group. Email us before check-out for the code!

Meditation Monday – Rise From the Ashes