Every now and then God throws curveballs in my direction which shake my theological presuppositions. I’ve been known to say that God has terribly bad theology because God does things which I think that God shouldn’t do. I was caught short (in one of the more pleasant ways) during the past week during a critical moment in a palliative care unit this past week. A patient had returned from a scan to discover that an heirloom which had been attached to her necklace had gone missing. This resulted in a frantic and exhausting search involving almost all members of the hospital. While the family was at peace that the small heirloom would be located, staff were deeply concerned. Tradespersons were brought in to dismantle parts of the rooms to see whether it had fallen into unreachable places.

By the next morning, everyone was aware and increasingly concerned that nothing had turned up. Every step having been retraced on more than one occasion and options were running out. As the situation was being discussed in handover, the thought went through my mind that St Anthony was the patron saint of lost things…

Being a Baptist, I’ve often been skeptical of the notion of praying to saints. After all, doesn’t the Bible point us to One who intercedes on our behalf? Isn’t it through Jesus that we gain access to the throne of grace? However, there have been many times in ministry when I’ve just had to stop and praise God for what has happened. I know all the theological reasons that car park prayers are not something to waste God’s time on, and yet often enough in frustration I have reached the point where I’ve simply asked God only to turn the next corner to find a space! Hmmmm.

On this occasion, I muttered under my breath that St Anthony needs to do his work for us this day. A few moments later, the (Irish) nurse running us all through the handover turned to look at me and asked, “Do you think we need to talk to St Anthony?” When I told her that the same thought had just gone through my mind, she responded with a nod and a smile. About thirty seconds later – I kid you not – there was a knock at the door to bring news that a man had just found the lost item! All eyes in the room turned to me, and I just shook my head in wonder (or was that disbelief?). All this in less than a minute!

How often do I need to be reminded that God’s ways are not my ways? That there are thoughts, ideas, and actions which God undertakes regardless of my own predispositions? Wasn’t a blind man healed by Jesus with some ordinary mud? Didn’t Naaman need to dip seven times in the Jordan to be healed? (Why seven? Why the Jordan – questions Naaman himself asked!). Wasn’t Paul released from his chains by songs of praise?

Theology is a helpful servant but can be a terrible master if we let it keep us from trusting God and hoping in the wonders of God’s ways. I can think of good theological reasons against praying to saints, and yet what wonders were worked that day! Sometimes I just need to take the brakes off and open up to what God might do… in God’s own way!

Gary Heard is a Baptist Minister and senior lecturer in Pastoral and Ministry Studies in the University of Divinity. He is married to Evelyn and has three adult children.

Photo by Nick Castelli on Unsplash 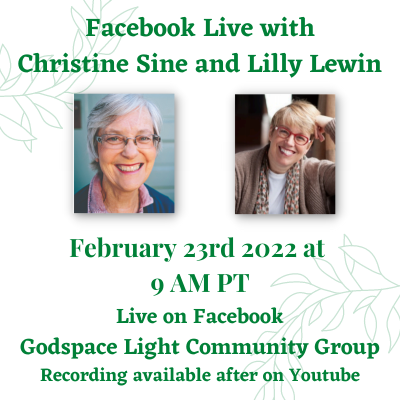 Remember, Facebook Live will be next week – Christine and Lilly will talk about Celtic Christianity, as Lilly has the opportunity to attend a retreat with John Philip Newell! Join Christine Sine and Lilly Lewin on Wednesday, February 23rd 2022 at 9 am PT (check my timezone) for our next FB Live happening on our Godspace Light Community Facebook Group! Can’t make it? No worries–we upload the sessions on our youtube channel so you can still enjoy the lively discussions and interesting topics. And catch us live for the next session–happening here!