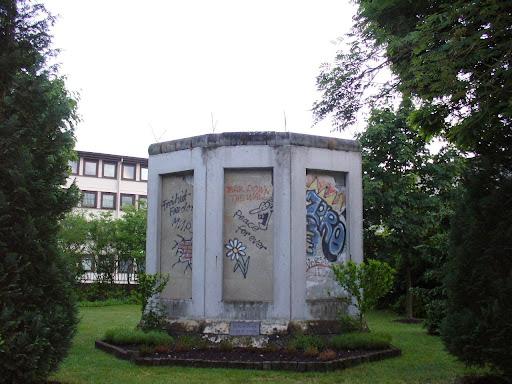 Photo of actual panels from the Berlin Wall at Ramstein Air Base in Germany. Picture taken by Michael Moore on January 26, 2008.

I first came across Dietrich Bonhoeffer in seminary through his book The Cost of Discipleship. Admittedly it wasn’t easy to read but the message did come through clearly for me. I also came to realize that he had played a role in the development of one of the Confessions in the Presbyterian Church (U.S.A.)’s Book of Confessions. “The Theological Declaration of Barmen was written by a group of church leaders in Germany to help Christians withstand the challenges of the Nazi party and of the so-called “German Christians,” a popular movement that saw no conflict between Christianity and the ideals of Hitler’s National Socialism… Most Germans took the union of Christianity, nationalism, and militarism for granted, and patriotic sentiments were equated with Christian truth. The German Christians exalted the racially pure nation and the rule of Hitler as God’s will for the German people.” (PC(U.S.A.) Book of Confessions (2016 printing) p. 280)

While reading a book by the daughter of Reinhold Niebuhr (a theologian whom I had studied in seminary), The Serenity Prayer: Faith and Politics in Times of Peace and War, I was interested to discover that Niebuhr was on the faculty of Union Theological Seminary in New York City while Bonhoeffer spent a year (1930-1931) studying there. She recounts the times when a group of German professors and theologians would gather for social evenings at Niebuhr’s home with Bonhoeffer. Following his year at Union, Bonhoeffer returned to Germany where he was very involved in “The Confessing Church” which was the church that rose to speak out against Hitler and the “German Christians” who supported him. He founded an underground seminary at the church’s request in 1935. “In 1939 Bonhoeffer considered taking refuge in the United States but returned after only two weeks in New York City, writing to his sponsor, the theologian Reinhold Niebuhr, that ‘I will have no right to participate in the reconstruction of Christian life in Germany after the war if I do not share the trials of this time with my people.’” (Britannica.com Biography of Dietrich Bonhoeffer)

Bonhoeffer personally showed by his life the cost of discipleship. He was arrested in 1943 and imprisoned first in a Gestapo prison in Berlin and then was imprisoned in the concentration camps at Buchenwald and Flossenbürg. When the Nazi government discovered that Bonhoeffer was involved in the failed plot to assassinate Hitler, he was executed alongside other conspirators mere days before the American Army liberated the camp. His last words were “This is the end—for me the beginning of life.”

In Bonhoeffer’s life, ministry, and death he lived out the words of Jesus in John 15:13 – “No one has greater love than this, to lay down one’s life for one’s friends.” Dietrich Bonhoeffer was born on February 4th, 1906, and he died on April 9th, 1945. In his thirty-nine years he made a huge contribution to the Confessing Church and to the resistance movement at a critical time in Germany’s history.

Why is it important that we remember Dietrich Bonhoeffer today? Why are his writings still as relevant today as they were during his lifetime? Bonhoeffer’s writings and life are a stark reminder that Christians and the Church have a responsibility to speak out against the union of Christianity, nationalism, and militarism that was on full display during the attack on the US Capitol on January 6th, 2021.

The church is at a critical crossroads in these times of chaos and uncertainty. Jesus himself spoke out against the “wedding” of the temple and the empire. I believe the church and individual Christ-followers have a responsibility as well to speak out against today’s blending of faith, nationalism, and militarism. During my 26 years in uniform as a USAF Chaplain (1985-2011) I saw the results of such a blending. It appalled me to read how chaplains were writing scripture verses in chalk on bombs that would be dropped by our military aircraft on Iraqi troops and civilians during Operation Desert Storm (1991). It also worried me to see a growing number of chaplains who felt no discomfort as faith was blended with nationalism and militarism. For me, the bottom line is found in Joshua 24:15 – “Now if you are unwilling to serve the Lord, choose this day whom you will serve, whether the gods your ancestors served in the region beyond the River or the gods of the Amorites in whose land you are living; but as for me and my household, we will serve the Lord.”

I will close with these words from the “Theological Declaration of Barmen” – “We reject the false doctrine, as though the church, over and beyond its special commission, should and could appropriate the characteristics, the tasks, and the dignity of the State, thus itself becoming an organ of the State… The church’s commission, upon which its freedom is founded, consists in delivering the message of the free grace of God to all people in Christ’s stead, and therefore in the ministry of his own Word and work through sermon and sacrament.” (PC(U.S.A.) Book of Confessions (2016 printing) p. 284)

As an Amazon Associate Godspace receives a small amount for purchases made through appropriate links. Thank you for supporting Godspace in this way. 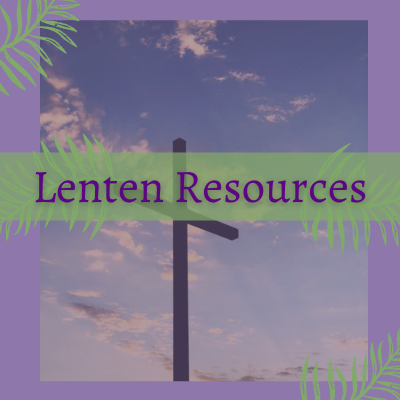 Looking toward Lent and Easter? There are resources available in the Godspace Shop–from free exercises, daily ideas, poetry and more to prayer cards and devotionals! Additionally, we have compiled many posts and other resources together for your convenience on our Lent & Easter Resource Page!

Candlemas, St Brigid and Praying With A Cup – Facebook Live With Christine And Lilly