A captive to granite gray stare,

I shiver and hunker there.

As I awoke from sleep one morning, these words came distinctly to my mind: “The long, cold stare of January.”

I don’t know where those words came from. But they came clear and definite; and they stayed with me. I wrote that phrase in my journal. And I thought about it. Later I wrote the (above) poem.

I live in northern Colorado. January is our coldest month. And it is a long month, 31 days. The cold, short days and long nights can make one feel captive. It is a season when people, those who can afford it, like to travel to places like Mexico, Florida, or Spain. Other people may dream of warm beaches during January. But the weather often keeps us indoors and isolated. We can feel captive.

Where did my unconscious mind get the idea of January being a long “stare”? I don’t know. But there is a sense in which one can feel captive in an uncomfortable way when someone keeps staring at you. Cold stares are especially disconcerting.

Feeling trapped, fearful, impatient with your situation can make your outlook seem hard and gray. But, truly, there is beauty in every season. Opening our hearts to “see” that beauty can turn those cold, gray eyes to a silver gaze.

Contemplatives speak of the “gaze” of the face of Christ that holds, sees deeply, and can draw out the inner radiance of one’s true self.

Recently I was reading a story that described the “silver” eyes of some Scottish Highland folks. I had never heard eye color described as silver before. Polished silver is not a cold-looking metal. It has a warmth that seems to gleam from deep inside.

Hidden in every hard place is hope. If we look for it with eyes to see, it will eventually gleam forth, and then, rather than be captives we may become captivated by the presence of love and even joy.

Photo by Kacper Szczechla on Unsplash 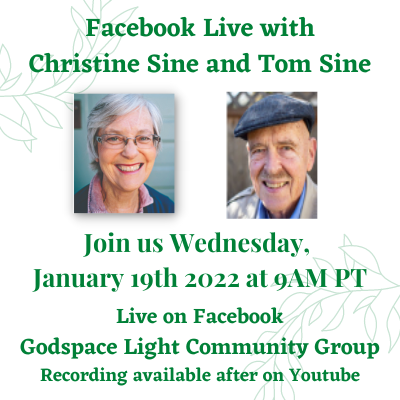 Tomorrow! Join Christine Sine and special guest Tom Sine as they discuss commitment to a whole life faith and a rhythm of life that flows out of it; live in the Godspace Light Community Facebook Group. Happening every other Wednesday–join us for the next one on January 19th, 2022 at 9am! Can’t make it live? We post them after on our youtube channel, so you never miss the fun!