Being grateful for having a toilet must be one of my passions because I wrote an article for Godspace last year on this–although for some reason I did not post it on my own blog!

To be honest I do have a bit of a toilet obsession, having suffered with IBS for a time, until firstly I stopped gluten and dairy. I did that for a while and then got into QEC Counselling – which I do know I bang on about but it has changed my life. I do still worry about knowing where toilets are and if there are too many people in the house for the amount of toilets. Yes, it is a thought that passes through my mind. And I am sure I am not the only older person who feels that way!

I met up with some older ladies in the park dog walking the other day, and they were doing the thing old people can be guilty of – saying the younger generation don’t know they’re born lucky- and one of the things was about outside toilets. Both ladies remembered having to go out into their backyards to use the toilet and worrying about spiders and other creepy crawlies. Though both did admit they wouldn’t go back to those days; it is alright to reminisce and look through rose-tinted glasses, but we do all like our inside flushing toilets and do very much take them for granted.

But imagine not having a toilet at all, or when you did go out to a shared outside toilet there was a chance of being bitten by poisonous spiders or snakes, or for the girls, the fear of being raped. And the cleanliness of these holes in the ground is not good at all.

But did you also know that for every dollar spent on hygienic sanitation and clean water $5 dollars gets saved in medical costs? Wow, so little can save so much.

But it doesn’t only save on medical costs, it helps with productivity in the workplace. Imagine being a woman without proper sanitation during your period or when pregnant! But when money is spent on toilets in the home, in schools, in the workplace, these women are not only safer and healthier but also able to reach their full potential and truly fulfill their role in their society. They would no longer be marginalised, fearful and “unclean”.

Sanitation is one of the basic human rights recognised by the UN which are not being met in far too many places. Perhaps as we move towards Advent and Christmas we should see how we can help promote human rights in countries that too often get ignored. One way is to sponsor a toilet via Toilet Twinning, and check out the UN website for ways to learn more. Be alert and aware as to how blessed we are in the West and how much we take for granted, and be willing to see what more you can do.

You might feel like just a drop in the ocean but if all the drops in the ocean stopped being drops then the seas would vanish. If each of us is our little drop then we can change the world. 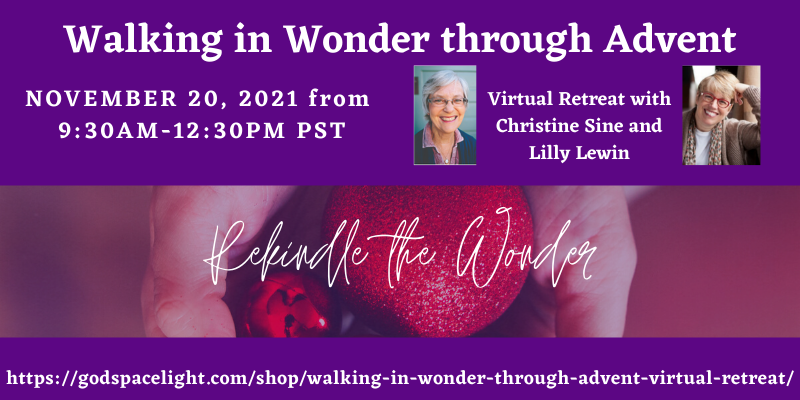 Join us TOMORROW! There’s still time to sign up –even if you aren’t able to join live, if you sign up you will have access to the full retreat to watch and participate in later! Join Christine Sine and Lilly Lewin THIS Saturday, November 20th 9:30-12:30 PST (check my timezone) for an interactive, multi-sensory, creative retreat focused on the WONDER OF ADVENT! Come with a creative heart, be inspired, have fun, and reconnect with the WONDER of the season. And did you know? If you have attended a retreat with us before, we offer a discount. We also offer a group discount for groups over 5. Email us to get the code!

FreerangeFriday: The Gift of Roots and Rootedness

A Table Talk for Thanksgiving

The Gift of Gratitude