writing and photos by Elaine Breckenridge

In 2007, I ventured to climb a hill on Inis Mor, one of the Aran Islands off the coast of Ireland. The goal of the climb was to visit a tiny hermitage perched on top. Dating from the 7th century, Teampall Bheanain is considered the smallest church in Ireland.

From the bottom of the holy hill, it looked like an easy climb. I was mistaken! There were boulders to dodge or climb over. Moss-covered rocks were deceptively slippery. Loose stones made it all too easy to roll an ankle. It was a feat to make it to the top, and yet the trek was worth it. There was a lovely view of the countryside below on one side and on the other, a magnificent view of the sea. It was breathtaking. As the sun began to set, streams of light kissed the sea and land. I could understand why monks had a cell there. It is a place of solitude, not loneliness. 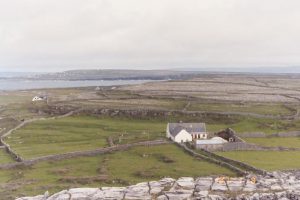 Evening was coming on and it was time to make the descent down. The descent was certainly more difficult and treacherous than the ascent! In addition to slipping on the rocks, gravity was doing its best to take me down. It took every bit of mental concentration to control the proper placement of footing in order to remain safe. Now, I understood why a monk would stay up there days at a time. It was in fact physically difficult to come down from that mountain top!

In the pre-Christian Celtic religion, hills were holy places, thin places that were climbed so that one could be near the sky gods. Climbing was already an important feature of their spirituality. When Christianity came to Ireland, the earliest missionaries found a people receptive to the notion of God coming down from heaven in the birth of a person named Jesus. Christian Celtic preachers and teachers, using their gifts of imagination, put flesh and bones on the doctrine of the Incarnation. In his book, A Holy Island Prayer Book, Anglican priest Ray Simpson describes God as “bounding down a rocky mountain with a hand reaching out in love to the people waiting below.”

Having gone up and down that rocky Irish hill, I can see how that metaphor perfectly illustrates the grace of God. The spiritual life is about receiving God, who with a sense of urgency and joy leaps over boulders and runs down a rocky hill, just in order to be with us. It is not about making an arduous trip up and down a difficult hill. Instead, it is waiting with expectant hearts for God to come to us. 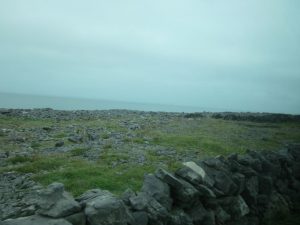 In 2016, I returned to that same holy hill and looked forward to making the ascent again. But nine years later with an arthritic hip, I couldn’t do it. It was disappointing. Then, I remembered Ray Simpson’s lovely metaphor. I sat down, rested, and sure enough, God’s peace and joy filled my heart. Waiting with an expectant heart brought God’s love.

There is plenty to do in the fleeting days ahead of Christmas. Carving out time for receptivity, stillness, and rest may seem like a luxury we can’t afford. And yet, I have discovered that simplifying is a transformative process. As the German mystic-philosopher Meister Eckhart said, “the spiritual life has much more to do with subtraction than it does with addition.” (Quoted by Richard Rohr in Breathing Under Water)

We don’t always have to climb a hill by adding more into our lives. Doing less, and inviting God to fill our hearts, really does work. If you have not taken that path recently; try it. It will be well worth the journey. 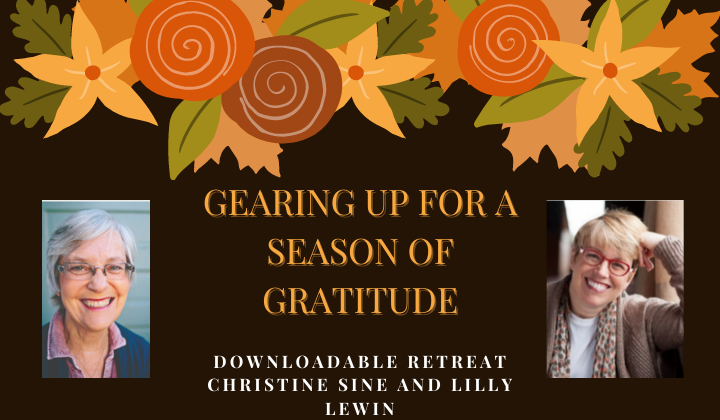 Thanksgiving is just around the corner. In the busyness of the season, we can sometimes lose our own centering. What does gratitude mean, even when we are grieving or busy? Explore ideas of gratitude, enjoy handouts and 4 video modules, an origami box tutorial, and more with Christine Sine and Lilly Lewin! This retreat is formatted as an online course so you have 180 days of access to work through the retreat at your own pace.