How to be Grateful when Life isn’t Being Fair

I’ve been having a quiet rant to God on behalf of a friend. I’m not sure if she’s ranting too but I am. Last week her youngest daughter gave birth to her first child in her early 40’s after years of trying; miscarriages, IVF, etc. But then at the start of this week my friend’s dad died suddenly. It isn’t fair, I am shouting into the heavens. Why can’t her and her family enjoy the awesomeness of this miracle baby just for a few months without having to deal with grief? Why???

The season in GodspaceLight is gratitude, and I know I’ve also written about gratitude on here in various guises, but my thought for today is “how can I/we be genuinely grateful when life is being unfair? “

But then as I walked the dog in the park this morning I experience the second awesome sunrise of this week and also had a heron fly from the pond almost directly in front of me. It got me thinking – I only get to see the sunrises on my dog walks now because the days are getting shorter, daylight hours are getting less. And I can marvel at how there are amazing colours in the sky for a good 20-30 mins before the sun rises officially. Even if I get up in the summer really early the sun doesn’t do that same thing of filling the sky with colour and light earlier than it pops its head up. If it wasn’t for that shortening of daylight hours I wouldn’t get to see this. So a place to be grateful when the dark is getting more?

Also what I felt when all this was going on around me is that yes life isn’t fair but there are good things going on in the unfairness. It reminds me of the fact that the trip to Paris to launch my daughter into university was marred because my father-in-law died that same weekend, so when I look at the picture of her grinning over a very very frothy cappuccino I think of his death too. Life throwing one of its unfair curveballs.

So all I can say about how to be grateful when life is being unfair is to accept and grieve in the unfair bits, the death bits, the darkness, but also be grateful in the sunrises, the births, the trips to Paris.

Both are allowed. Both are ok. It is not ‘either or’ but ‘both and’.

A few years ago I supported another friend though the first year after her husband’s suicide and we cried lots but we also laughed lots. We were able to be ‘both and’. Even now when we meet we do both – laughing and crying – more often than not in a public place

So I will hug my friend as she grieves and laugh with her as she delights in her new granddaughter. Together we can accept that life isn’t fair and that there are sunrises and there are sunsets. Some things are beautiful and some things are tragic. That we do not live in a world where only good happens and somethings we have to deal with both things at once. But we can do it! 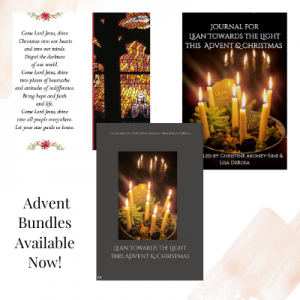 Bundle and save on our updated and new resources for Lean Toward the Light This Advent & Christmas! Choose from several bundle versions, conveniently available either to ship to you or download.

Meditation Monday – God Is Creating Beauty In Us

Looking Back What Do We See

The Gift of Gratitude