Writings and photos by June Friesen,

What comes to your mind as you hear the words ‘World Wide Communion’? I have to admit that it was not until maybe fifteen to twenty years ago that I really gave it much thought at all. It was when my life became involved with refugees coming to our country fleeing rebels, poverty, and other issues. In recent years as it approaches each year my mind wonders how other people are holding their services of communion. Do they have the elements that many of us deem as necessary? And if not, how do they proceed. A few years ago, I used the Sunday as a teaching time with grapes and some wheat kernels that we passed around and partook of instead of the juice and bread that is traditional. I shared how the grain needs to go through intense crushing to become the needed flour for bread. The grapes need to be crushed to give up the needed element for juice/wine. So, Jesus came to face a similar situation in order to give humanity the opportunity to have a renewed relationship with God. His body was crushed, bones broken, and his life-giving liquid blood was spilled from head wounds by the thorns, his wounded side by the sword, the lashes on his back by the whips, and the nails driven through his hands and his feet.

The past year and a half,  the world has struggled intensely with issues we have not been able to control. There is Covid. There is war(s). There is rioting. There is unnecessary death. There is division everywhere. My friends, when Jesus was on this earth it was really not much different – but He came to offer to anyone who believes in Him and His death and resurrection the gift of life after this earthly life. He said that this gift of life, eternal life, would be worth dying for – and He led the example and died first. Let us read about His preparation before His death, which by the way, included His disciples at that time.

26-29 During the meal, Jesus took and blessed the bread, broke it, and gave it to his disciples:

Take, eat. This is my body.

Taking the cup and thanking God, he gave it to them:

Drink this, all of you. This is my blood,
God’s new covenant poured out for many people
for the forgiveness of sins.

“I’ll not be drinking wine from this cup again until that new day when I’ll drink with you in the kingdom of my Father.”

Jesus took His twelve disciples aside as He prepared for the final hours before His earthly death. It was an intense time for not only Jesus but for His disciples as well. We are told briefly of what happened between Jesus and the disciples, particularly Judas at this meal but I expect that it was a somber and quiet time. And when they were finished it tells us they all went to the Garden of Gethsemane, a place that they had been before but this time no doubt things happened a little differently. When they arrived, Jesus went off by Himself.

39 Going a little ahead, he fell on his face, praying, “My Father, if there is any way, get me out of this. But please, not what I want. You, what do you want?”

FATHER, WHAT DO YOU WANT?

Wow, God – have I ever taken even one time recently to ask of You, “What do You want of me?”. Your Son in His time of deepest distress, knowing well what was ahead of Him, set an example for us His followers. In the past year and a half, I have to admit that I probably have not gone into that deep place of prayer with You and asked of You – ‘Father, what is it that You want of me here in this situation in the world today?’. In fact, I have to wonder if my story would be similar to the next verses where Jesus speaks to His disciples.

40-41 When he came back to his disciples, he found them sound asleep. He said to Peter, “Can’t you stick it out with me a single hour? Stay alert; be in prayer so you don’t wander into temptation without even knowing you’re in danger. There is a part of you that is eager, ready for anything in God. But there’s another part that’s as lazy as an old dog sleeping by the fire.”………

42 He then left them a second time. Again, he prayed, “My Father, if there is no other way than this, drinking this cup to the dregs, I’m ready. Do it your way.”

43-44 When he came back, he again found them sound asleep. They simply couldn’t keep their eyes open. This time he let them sleep on, and went back a third time to pray, going over the same ground one last time.

Jesus, in His distress, in His time of great struggle asked His Father if there was any other way to get out of the situation He was facing – yet, He yielded His Will to His Father God. But His disciples – Jesus says to them, ‘be alert – pray – so you don’t fall – in one sense you are wanting to follow God but there is a part of you as that is rather lazy spiritually.’ If Jesus were speaking to His disciples today as He is in prayer before His Father in heaven about our world this day in 2021 – how would Jesus address us?

These verses have taken on a new meaning for me this year, 2021. As I meditated upon these last few verses, I have asked myself, “Am I like the disciples, asleep spiritually in this struggle of Covid, racial unrest, and world unrest?” I am finding myself challenged to open my spirit to God asking Him, ‘God, what is it You need from me today?”

Tomorrow for World Wide Communion Sunday, we are invited to what I am calling a new beginning. A new beginning where we can begin to support one another as we celebrate Jesus’ earthly life, His death, and His resurrection giving us as believers the promised gift of eternal life with God in the end. (John 14:1-2) Jesus said: “Believe in me, because I am going to help my Father prepare a blessed home in the heavens for all who come and follow me.” 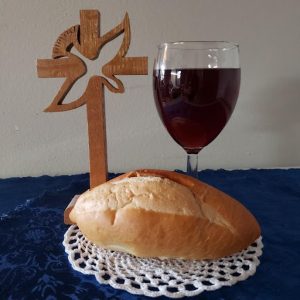 The invitation has been extended so many years ago
By God Himself to humanity He created and continues to create each and every day;
It is an invitation to come and walk with Him in this world
So, when our last step here is taken, the next step will be our entrance into eternal glory.
God took the first step so many years ago
He sent His one and only Son as a baby, born into humanity,
He grew as a child experiencing life as a refugee,
Then growing and living within a community and even traveling to Jerusalem for the Passover celebration –
He grew into adulthood and then He was commissioned to teach –
To reveal to the world a new beginning, a new way of getting to know and follow God.
He chose twelve men to teach and train more deeply,
Yet we know others were also profoundly affected
Such as Mary, Martha, Lazarus as well as the many who were healed.
And then there were the final hours before He was crucified –
He explained – His physical body would be broken, beaten and bruised like grain is before it becomes bread to sustain physical life;
His blood – which is the essence of physical life – would run from His physical wounds as juice runs from the fruit to sustain life;
Jesus died physically…..
BUT PRAISE GOD
Jesus came back to life spiritually…..
So today as people we celebrate all over the world,
This wonderful gift of life for our spiritual beings –
By remembering this wonderful gift Jesus gave to us all
Two thousand years ago.
It is a gift that unites all of us worldwide into one family,
GOD’S FOREVER FAMILY!
PRAISE BE TO GOD THE FATHER,
PRAISE BE TO GOD THE SON,
PRAISE BE TO GOD THE HOLY SPIRIT,
THE GREAT THREE IN ONE.
AMEN AND AMEN. 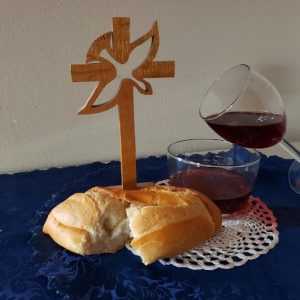