Gearing Up for a New Season

I Never Knew You

I received the obituary of a former colleague via an email post the other day from the Diocesan office, which filled me with amazement and opened up a whole gamut of emotions in me.

She and I had both served in a church together for a few years, well over twenty years ago; she, as a reader and I as a curate. She was a very private person and fiercely independent, and I, being a schoolteacher, as well as a NSM part-time priest, was always too busy. We didn’t always see eye to eye on certain matters, but we were both hard workers, and content and eager to serve the congregation in our own separate ways.

But as I read this obituary, I discovered someone I wish I had known better; for here was a real gem of a person, a pure diamond. I could have learnt so much from her, and gained a much better perspective of the world around me, had we both chosen to chat in-depth.

I read in her obituary that she had had a distinguished professional career as a Consultant Anaesthetist at a top local hospital, for the Royal Army Medical Corps and the International Red Cross, including in Nepal, Afghanistan, and Somalia. Among her achievements, she was appointed the first female commander of a RAMC Unit. Her various activities were recognised through her appointment as Queen’s Honorary Surgeon and as Deputy Lieutenant of Tyne and Wear. In 1993 she was awarded the OBE for her humanitarian work with the Red Cross.

What a career! Such splendid service to humanity! I was ignorant of all this!

I had also missed out on remarkable stories of her faith and her courage, stories that I was only hearing for the first time when I attended her funeral the other day. A shell had once exploded 20 yards away from her as she worked in an operating theatre, and one of the walls nearest the blast had begun to collapse. The staff could barely see each other due to falling debris, and after a brief pause to allow the dust to settle, they all got on with the operation.

I so much needed to be there at her funeral, because I wanted to take that last chance to get as close as I could possibly get to her, to say sorry for not being there for her as a friend, and I wanted to pay her my respects, long overdue.

How I wish I could have got to know her in her living years.

I am more and more convinced in life that God places certain individuals alongside us, with totally opposite gifts, personalities, and spiritualities, so we can complement one another over time, and bring insight and depth to lives other than our own, in our time here on earth. But we don’t always see these fine qualities in each other, do we? We can be so blind.

Let’s hope, by that same token, we don’t come before God at our time of departure, hearing the words, “I never knew you!” (Matt 7.23) because we have never taken the time to really get to know him.

Photo by Mayron Oliveira on Unsplash

Register and pay to join us for this virtual retreat experience with Christine Sine and Lilly Lewin on September 25, 2021 from 9:30 am to 12:30 pm PST. Check out our new sliding scale payment options. For more details, click on the image below. 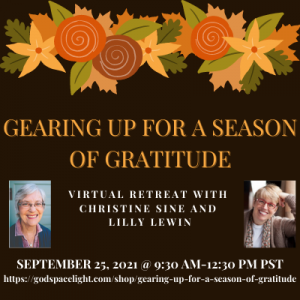 To Everything There is a Season

FreerangeFriday: Begin a New Season with Apples and...