The 11th September 2001 is a day that everyone over about 25 can say where they were and how those around them reacted. Yes, it was a day that changed the world. Iconic? That depends on how you use the word. From the destruction of the Twin Towers and the other plane attacks, terrorism came to America. From that one day, major government decisions were put in place which has led to the culmination of millions of Afghans now needing to be housed in safer parts of the world.

Terrorism was not a new thing. Many countries had endured it for centuries. Here in the UK, we had learned to live with the uncertainties of bombings by the IRA in our city centres. But I think it was the cunningness, the planning, the audacity, determination, tenacity, single focus, and utter belief in their cause that shocked so many. These men learned to pilot those specific planes with that specific airline so that on their maiden flight they took not only their own lives but the lives of many, many others.

For Christians, we talk of living for a higher purpose but, especially in the West, how often do we? We may get reprimanded for praying in our schools, hospitals, etc, which we moan about, put a post on social media, but are very rarely willing to, or even asked to, die for. Suddenly on 11th September 2001, we were confronted by a group of radical people who not only talked that talk but walked it too. Here were a people group who would literally stop at nothing, including the loss of their own lives, to achieve what they saw as a higher goal.

Twenty years on, we are still reeling from it. Still feeling the effects of it. I believe it is because of the Western government’s decisions back in September 2001 which has led to the collective need in the West to help the refugees from Afghanistan. A need unlike anything that has been felt for those fleeing African countries, South American countries, Middle Eastern countries. Very much like when the Twin Towers were hit people were shocked at the numbers who died but more died in poverty across the world, from AIDS-related illnesses, from abuse, on that one day than in the Twin Towers attack, and yet the focus was on the terrorists rather than the things that we could help with.

Over these last 18 months, we have had to face another unseen enemy – the coronavirus. We are not sure where it is or how it moves. We neither see it nor feel it until it is too late. Also, as with many issues in the rest of the world,  if it doesn’t affect us and those we are close to then we want to pretend it does not exist and to be able to carry on as normal and let “them” deal with it. We only react then when it touches one of those we love when it hits home. This was the same twenty years ago. Terror attacks across the world did get a mention in the media but not for a prolonged period and did not have the same gut reaction as the Twin Towers. They were acts that happened “over there” not on our doorstep. We would only really hear of events if there was a Western person, someone of our nationality, affected by it. So like we are now with Covid-19.

To me with these two unseen things – terrorists who are willing to die for their cause and the coronavirus that keeps morphing so it can live – we have learned so little about ourselves. We are still only focused on what changes the lives of those we love and those we care for.

I remember one of the things said by the media after 9/11 was that the planes were aimed at the Twin Towers because they represented Western economy. I think God was trying to tell us all something then about our greed and fears, and how we view our resources, what we in the West saw as “enough”. I think with this pandemic, God has once again highlighted our global economy and how much is lacking in our care for others – something the group involved with the 9/11 atrocity felt a dramatic need to highlight. It has been the less developed nations that have lost most during this pandemic and yet it has been in the West that people have bemoaned many things we have got used to seeing a right not a privilege.

The questions arise again and again – are we willing to change? Are we willing to love all people whether they hurt us or not? Godspace’s focus at the moment is about the “new season.” Are we willing to move into a new season in how we view the world and realise how connected we are? My spending decisions affect someone in the Taliban as much as it affects someone in London, New York, the Philippines, etc.

So my prayers today, 11th September 2021, are that as we remember the loss of life at Ground Zero, and in the other attacks, we remember the immense bravery of the emergency services that day and the days following, the lives and livelihoods lost by so many connected with 9/11. I will also pray that we remember the loss of life – and livelihoods – of those from Covid-19, and also the immense bravery of the health services and other emergency services and support workers around the world over this time. I also pray that all of us, including myself, realise how much is “enough” and let go of our fears of sharing our “more than enough” with others – whether that be time, money, resources, but most especially our love and understanding. As one of my Youthshedz young people said, we cannot meet shame with shame. We cannot meet fear with fear and as Jesus said we cannot meet violence with violence.

Embark on this healing journey with Christine Sine, Lilly Lewin, and Bethany Dearborn Hiser with the Time to Heal Online Course. Each session is lead by one of our instructors and allows you 180 days of access for only $39.99. The goal of this course is to provide time, space, and tools to work toward healing. 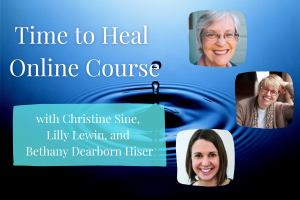 FreerangeFriday: Begin a New Season with Apples and Honey