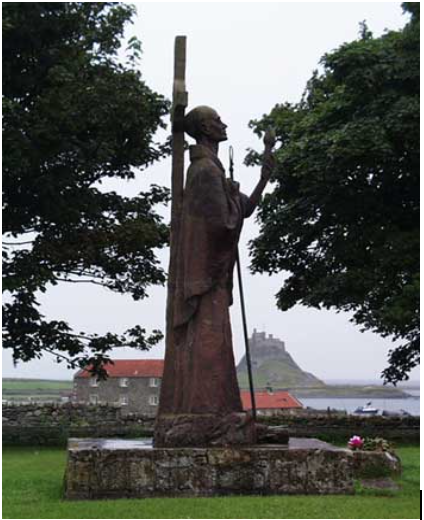 Preach the Gospel at all times and use words if necessary

How do we share the Gospel of Jesus the Christ if we don’t speak the language or we don’t easily meld into the society to which we have been planted by the Spirit? Perhaps we can take a clue from St. Aidan’s life that resembled the later St. Francis of Assisi’s admonition to Christians, “preach the Gospel at all times and use words if necessary.”

We know about St. Aidan from The Venerable Bede’s Ecclesiastical History of the English Nation, Book III in which he praised Aidan for his learning, charity, and simplicity of life. St. Aidan was a 7thc. Irish monk/Bishop, born in Ireland who established a famous Celtic-style monastery on the beautiful and sacred isle of Lindisfarne (also called Holy Island). This tidal isle, in the area of Northumbria in northeastern England, is known as a “thin place” where heaven and earth seem to be only separated by a thin, almost gossamer veil. Many of the early cherished Celtic and Anglo-Saxon saints had significant connections to Lindisfarne including St. Cuthbert, St. Hilda of Whitby, and Bishop Eadfrith who hand wrote and illuminated the magnificent Lindisfarne Gospels.

Some scholars believe Aidan was raised, educated, baptized, and later served as a Bishop on the tiny, yet historic monastic island of Iona that was founded by St. Columba. Iona is in the area known as the Inner Hebrides on the southwest coast of Scotland. Other scholars propose that Aidan came from the great Irish monastic foundation of Inish Craig (later called Scattery Island) founded by St. Senan and afterwards Aidan joined the monastic community on the isle of Iona. Later, he journeyed on to Lindisfarne where he established a monastic community and became the first Bishop on this holy isle.

As Lindisfarne is a tidal island that is cut off twice a day by water, it was a good fit for Aidan. It was far enough away for some quietness and solitude and yet, it was also close enough to the Christian King Oswald’s palace in Bamburgh in Northumbria. Irish-born Aidan had a problem though. He agonized over not being able to communicate with his Northumbrian neighbors as Aidan could not speak nor understand the British tongue. The problem was solved by King Oswald who was fluent not only in the British language but also in Gaelic. Since King Oswald had learned Gaelic from his childhood years of exile among the Irish, he was able to translate as Aidan preached the milk of the Gospel of God’s love to the people in the area. Aidan would also often leave Lindisfarne and travel into the local villages showing them God’s love and care firsthand.

Lindisfarne shone as a beacon of light throughout England and Bishop Aidan became known as the “Apostle to the English.” Even though this saint struggled with the language of the Northumbrians, the local Celts and Anglo-Saxons saw Aidan’s life of simplicity, good works, and faith and they knew that they could trust what this man was telling them about God and His Son, Jesus the Christ. His life lived out “preach the Gospel at all times and use words if necessary.”

May each of our lives do the same.

Longing for Lindisfarne: Daily Reflections for the Week of St. Aidan’s Day

Meditation Monday – What Happened to My Awe and Wonder?

Take Time to Pause a Moment or Two