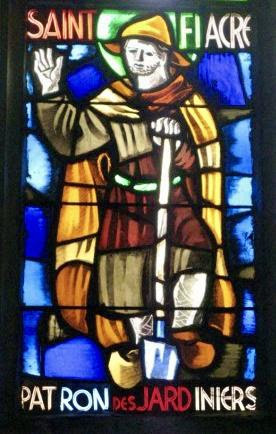 Do you love gardening and/or do you have hemorrhoids? Then St. Fiacre is the saint for you! Interestingly, he is also the patron saint of cab drivers in France. From about 1650, the Hotel de Saint Fiacre, in the rue St-Martin in Paris, hired out carriages that came to be known as fiacres, which became a generic term for hired horse-drawn transport, and then that designation was carried onto cabdrivers.

Fiacre (Fiacra, Fiachra) was born in the late 6th century into royalty in Connaught, Ireland, and was likely the son of a prince. He received an excellent education from St. Conan, at his monastery on the Isle of Man where he learned the art of herbal medicine. St. Conan was also known as Mochonna and had served as a monk at the historic Iona Abbey off the western coast of Scotland. In time Fiacre had his own hermitage and perhaps a monastery, possibly near St. Fiachra’s Well at Cill Fiachra (Kilferagh), near Bennetsbridge, County Kilkenny, Ireland.

This Irish hermit became so popular as both a soul and body doctor that he fled Ireland for France about 627, longing for solitude. Upon arrival in France, he became acquainted with a brother and sister who were of royalty and were faithful in serving God. Faro (Burgundofaro), was Bishop of Meaux, and his sister Burgundofara, was the founding Abbess of the famous Faremoutiers Abbey, a few miles from Meaux. Both Faro and Burgundofara had been blessed as children by the illustrious Irish St. Columbanus as he evangelized through France. Fiacre became close to these siblings and was granted a site at Brogillum (Breuil), in the province of Brie, France.

At his little hermitage in the forest, St. Fiacre grew vegetables and medicinal herbs to help feed and heal those who flocked to him for spiritual guidance and hospice care. He quickly realized he needed more space with all the folks who were coming to him for prayer and for miracles of healing, so he asked Bishop Faro for more land in the forest to expand his ministry. In response, Faro told him that he could have as much land as he could prepare in one day with a plough.

With miraculous speed, Fiacre quickly turned up the earth with the end of his pastoral staff using it as a plough, swiftly toppling tall trees and uprooting twisted briars and unwieldy weeds making way for his expanded ministry. A suspicious woman who spied this miraculous whirlwind of activity rushed to tell Bishop Faro that Fiacre was doing devilish incantations and witchcraft. However, when Bishop Faro sprinted to the area and saw for himself what had happened, he recognized that this was indeed the work of God. It is said that after that unpleasant experience, Fiacre who as an Irish monk, already was not too keen on women, prohibited females, on pain of severe bodily infirmity, from the precincts of his hermitage.

Fiacre’s ministry continued to flourish and he died of leprosy on August 30, 670, likely contracting this disease from caring for so many who were ill and sought refuge in his hospice. He was buried in his chapel in the forest not far from his hermitage and it is said that miracles took place at his tomb. His feast day is celebrated on several days in August and September.

Fiacre’s relics were preserved in his original shrine in the local church on the site of his hermitage, garden, and hospice, in the present-day village of Sainte-Fiacre, Seine-et-Marne, France. Later, in 1568, because of fear that fanatical Calvinists would harm his remains, they were transferred to their present shrine in Meaux Cathedral, which is near Saint-Fiacre.

Interestingly, his feast day has become a favored occasion for gardening groups and fraternities in France and Belgium to hold their annual jamborees. Some of these celebrations are huge affairs with thousands of people on the street with festively decorated floats and wheelbarrows. Fiacre is still so well-loved in spite of his disdain for women (hopefully over 1,400 years in heaven has softened his view of females) that there is even an international association, the “Comite Des Fetes Nationales Et Internationales Saint-Fiacre” to promote such events as well as pilgrimages to sites associated with this saint. A garden was even named after him to celebrate the Second Millennium, “Saint Fiachra’s Garden” which opened in 1999 at the Irish National Stud and Gardens, Tully, County Kildare, Ireland.

Yes, we can see why Fiacre was the patron saint of gardeners and taxi cab drivers, but still not too sure why he is such a popular saint with those with hemorrhoids.

There is an abundance of information on St. Fiacre (Fiacra/Fiachra) in John O’Hanlon’s Lives of the Irish Saints. Volume 8. August 30. Archive.org.

The Garden Trust has a good article with photos and pictures based upon the life of St. Fiacre.

If you are interested in the lives of other Celtic and Anglo-Saxon saints, please visit my website at http://www.saintsbridge.org/.