Making Time for a Sacred Summer or Winternature

Australia, we learnt in school, is a land “of fires, droughts and flooding rains” (Dorothea Mackellar) and fire has been a formative part of the human history of our land for sixty thousands years.

In January 2021, while summer ‘wild fires’ decimated many areas of Eastern Australia, we in Western Australia largely escaped, but just north of where I live 40,000 hectares (100,000 acres) of the Stirling Range National Park was affected by a serious, uncontrolled fire. The Australian Broadcasting Commission reported that, “Rare and unique flora and fauna in Western Australia’s Stirling Range may never fully recover from a massive series of fires which devastated the national park, which is considered one of the world’s most important biodiversity hotspots.” The photograph shows that the trees appear dead and the understory, once full of plants, is now only bare soil. The destruction of the fire appears complete. Everything is dead. But is it?

Following the fire, six months and twelve months after the fire, two plants in the Stirling Ranges caught my eye with their spectacular displays. They spoke to me of the resilience, renewal and beauty inherent in God’s creation and told me that, all may appear destroyed but this is not the end for that we all face a purifying fire through which that which we have created in love will remain forever (1 Cor 3:13; 13:3).

The Balga or WA Grass Tree

The photo on the left shows grass trees in the understory of a Jarrah forest. This forest had been ‘cool burned’ in the previous year, hence the lack of litter.The photo in the centre shows older grass trees. Balgas grow slowly (6cm or ¼” per year) and so this pair of trees would be about 150 years old. The photo on the right shows the flower spikes of the grass trees. Balgas are extremely flammable and their ‘trunks’ (compressed leaves for they are a monocotyledon) are always blackened by fire.

In the immediate aftermath of a hot fire, the balgas are reduced to black stems bereft of all their green spikey leaves. But fire also stimulates the balga to send up their flower spike. About a year ago, six months after the fire and at the beginning of the rainy season, the regeneration of the bush had begun, beginning with the balgas. Amongst the black, bleak landscape green leaves had begun to appear. The trees, which had lost their branches, were shooting from their trunks and the balgas had not only begun to shoot leaves but, in response to the fire, every balga (from the smallest to the tallest) had put forth a 2m flower spike. It seemed as though there were thousands of flower spikes all pointing heavenward. It was a wonderful sight but I have no photographic evidence, for I was in too much of a hurry, to stop and let the vision speak to me. In a usual winter, the balgas would have been obscured by the other shrubs and trees, but this July they were the first heralds of the ‘new life’ following what seemed at the time to be the universal death of the living world of the Stirling Ranges. Thousands of living arms pointing to the heavens showed me that, in God’s economy, death can destroy nothing of value and the resurrection is a sure sign that new life is coming. The church proclaims: “Christ is Risen” and the balgas and the faithful respond: “He is Risen Indeed”.

The Moojar or Christmas Tree

These photos, of the Moojar or Christmas Tree, were taken almost exactly one year after the fire that ‘totally’ destroyed the flora of the Stirling Range National Park. Notice how, in the left hand photo, a range of understory plants are in rapid growth and on the trees leaves are forming the beginnings of new branches. In the photo on the right the dead skeletons of 2-3 m shrubs can also be seen, but they are not dead. New shoots are emerging from the root ball. The spikey leaves of the taller form of grass tree can also be seen in this photo. But far more impressive, are the Christmas Trees in full flower. The Nuytsia floribunda’s spectacular flowers are seen every Christmas throughout the Southern part of Western Australia. The right hand photo is a very poor representation of the astounding visual impact of hundreds of spots of bright orange ‘fire’ standing out against the black and dull green of the landscape. Seeing this spectacular vista reinforced the impotence of the fires of death to destroy beauty and life. The ranges had suffered and groaned through the fire, but the plants of this land have adapted to frequent fire and showed the fires of suffering are a purifying prelude to glory. This vista was a vision for it was as if the hills were alive with Moses style burning bushes. Moses vision of a burning bush that was not consumed, was accompanied by a voice, “the place where you are standing is holy ground.” So too I heard the mooja’s glorious ‘fire flowers’ as a call to acknowledge I too was standing on holy ground. And, for Moses, the fire without led to vision of a fire burning within him and calling him to free and lead his people. It seems that, for the remainder of his life, Moses was guided and strengthened by the light and warmth of his inner fire. A vision ignited by his sight of the bush “that burned but was not destroyed”.

The Noongar people of South Western Australia too saw holy awe in the ‘burning bush’ flowers of the moojar. “The moojar was regarded as “highly spiritual” because it was associated with the spirits of the dead who according to the ‘old people’ “camped” on the branches and flowers of the tree on their way to Kurannup – the land of the ancestors.” (see nuytusia floribunda significance ). The balga too has an important link to fire for Noongar people. “The balga bush is important to Noongar for lighting fires, whether it is in their homes or when they go out to the bush” (Donna Rioli,).

Fire was essential to the Noongar way of life and burning the land was an important way of caring for country. For 60,000 years, every year and throughout the year, fire accompanied Noongars as they cared for country by burning the land. When the cold and rainy months began they could not burn the land but they needed fire to keep warm and cook. So ‘camp’ fires were kept burning all year and when it was time to move it was the responsibility of the women to protect and carry the embers which would be used to start the fires for a new camp. This was the third image that spoke to me. The women carried the fires next to their hearts, but this fire was not only for them, it was for sharing with others and they had to feed, nurture, protect and hold in mind their inner fire until the time came for the fire to blaze once more. 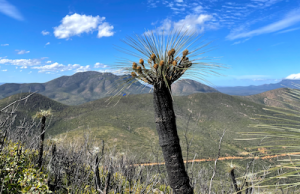 I’ve always wanted to see trees dance, mountains skip and, in the mountain cave, hear the still, small voice. Now I am old, I realise I could always hear and see these things (they are everywhere) if I paid attention.

Balga stretch their thin arms towards
The dark winter sky
Moojah flowers shine with an iridescent glow
Against the blackened hills
The rocks on the hilltops
Dance in sublime stillness
Silently, Noongar women walk
Through the mountain passes
With fire held close to their breasts

God’s Gifts In His World

The Art of Creation: Natural Designs