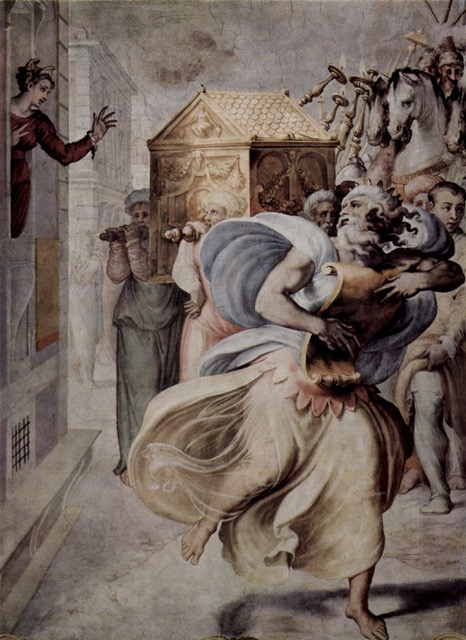 A couple of weeks ago, our associate rector Rev. Danae Ashley preached from 2 Samuel 6:12b-16 (NLT):

So David went there and brought the Ark of God from the house of Obed-edom to the City of David with a great celebration. 13 After the men who were carrying the Ark of the Lord had gone six steps, David sacrificed a bull and a fattened calf. 14 And David danced before the Lord with all his might, wearing a priestly garment.[f] 15 So David and all the people of Israel brought up the Ark of the Lord with shouts of joy and the blowing of rams’ horns.

16 But as the Ark of the Lord entered the City of David, Michal, the daughter of Saul, looked down from her window. When she saw King David leaping and dancing before the Lord, she was filled with contempt for him.

She started by asking a question I have never thought of: “What could cause Michal to hate David?”. As Mother Danae pointed out, Michal did not begin by hating David. In fact, she fell in love with him, lying to and deceiving her father to protect him. She is in fact the only woman in the Bible said to love a man but that love is unrequited. Instead her father uses her love against her to manipulate David into going into battle with the Philistines, hoping he will be killed. Then David seeks out not Michal, but her brother Jonathan, and David and Jonathan pledge mutual love. Michal is once more betrayed. David goes on to take many wives abandoning Michal again and she ends her life with no child, left in what was known as living widowhood by David.

By the time I had finished listening to her sermon, I was beginning to think that David wasn’t a very nice man at all especially in the way he treated women. Not only did Michal suffer but Bathsheba whom he probably raped, did too. And one wonders how many of his other wives suffered under his hand.

It was theologian John Stott who many years ago encouraged me to make sure I was asking the right questions as I read the scriptures and used as an example for my life. Now, as I listened to this interpretation of Michal’s story, I found myself not only with growing anger towards David, but also with a feeling of shame as I realized how easily I had viewed her story from David’s victorious and patriarchal perspective. Like so many of us, I have allowed the questions her life should have raised for me to remain unvoiced. So I am haunted by Michal’s story and by the stories of so many others who throughout history have been dehumanized by the powerful and the wealthy and labelled as bitter and cruel or as violent and murderous as a result. As Mother Danae reminds us – when we do not see all as of equal value before God, respect the humanity of every human being, and listen to the stories of those who are still at the margins, it is justice that is the major victim.

The pandemic has opened my eyes to inequalities in our society that I was not aware of, but it has also opened my eyes to misperceptions in the scriptures I had never noticed. I think that stories like Michal’s will continue to haunt me, and need to do so, in order to encourage me to grapple with new questions that help me to see more of who God is and who God wants me to become. What are the new questions you find yourself grappling with as you read the Bible? How has the pandemic opened up the scriptures and nourished your life? Who are the Michals of our world that need to be uplifted?

If you would like to listen to Rev. Danae Ashley’s entire sermon it begins at 22:32 minutes and is well worth reflecting on.