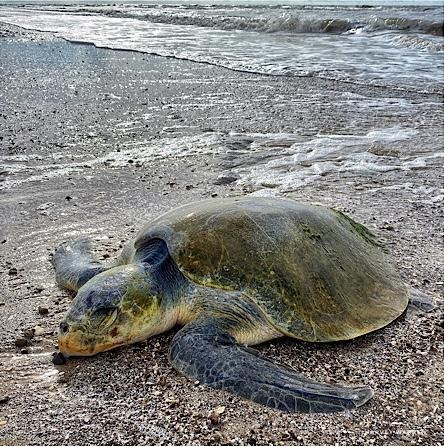 It took a village to save a sea turtle on Father’s Day which was also the Summer Solstice on Sunday, June 20, 2021, at McFaddin Beach on the Bolivar Peninsula on the Southeast Texas Gulf Coast. My husband Harvey and I love to go seashell shopping on the beach and I was hoping in the rays of early dawn to discover some beautiful treasures from the sea.

As we drove down this rather secluded beach, instead of locating a lovely seashell, Harvey and I spied a very large (over 3 ft. long) sea turtle looking distressed as the tide pushed her onto the beach. We immediately called the Sea Turtle Information Network line that is sponsored by the Turtle Island Restoration Network and sent photos via text of her to them. We spoke with a Representative that thought she might be trying to get to the dunes to lay her eggs. We soon discovered that she didn’t seem too interested in doing that.

After looking at the photos, the Representative determined that the sea turtle might be hurt or sick and asked us to put her in our SUV and told us how to gently pick her up and bring her to a certain location. Problem was, our beloved old Land Cruiser that we named “Sandy” died right there on the beach as the tide was rising. As I fervently prayed for help, several kind men stopped by to try to help us start Sandy to no avail and one generously handed us several bottles of water.

We called our beach neighbor Sid and his daughter Tiffany and granddaughter Hayley who said they would come to help us. I also called another couple, Gary and Louise, that also like to go beachcombing to see if they were anywhere near McFaddin Beach and fortunately they were close by. Between Harvey, Gary, and Sid under the watchful guidance of Louise, they tugged us in in our broken-down SUV with their new heavy-duty pickup truck and a very sturdy chain and rope three miles to the highway through the loose, dry sand and mud holes to enable us to call the tow truck.

In the midst of all this, Harvey stayed in touch with Turtle Rescue and the gigantic beautiful girl was tenderly placed in the back of Sid’s big black pickup truck with Louise’s towel soaked in saltwater covering the turtle, and Tiffany and Hayley kept her calm and made sure she had water on her. It was surprising how serene and patient this big girl was around us humans as we petted her head. We later learned that sea turtles will stay calm if you gently pat their shell.

We all arrived at the designated location beside a gigantic cross that resides at the ocean’s edge, several miles from where we had discovered the turtle. Of course, this big, beautiful sea turtle was an instant rock star when families at the beach saw her in the truck bed. Amidst many “oohs and aahs,” there were lots of photos and a video taken of her. Two Sea Turtle Rescue representatives arrived very quickly in a van to take her to sea turtle rehabilitation at the NOAA (National Oceanic and Atmospheric Administration) on Galveston Island and these two were quite surprised at how large she was. It truly did take a village and four hours to save this sweet girl! It was a Father’s Day and Summer Solstice to remember!

We received a reassuring text later that afternoon from the Turtle Rescue Representatives that relieved our concerns. They were thanking all who had been involved in saving the sea turtle and stating that her journey in the van down the 26 mile long, two-lane Highway 87 and then onto the ferry that crosses between the Bolivar Peninsula and Galveston Island went well and that she arrived at the NOAA in Galveston just fine.

Yes, it did take a village of human angels and probably some heavenly ones also to rescue this gentle giant sea turtle of God’s magnificent creation. Harvey and I are grateful to have had the privilege and honor of discovering her and that so many wonderful, kind folks joined in with hands, soul, and vehicles to rescue her. We all sensed that we had been part of something very special and almost mystical, a Celtic triune kind of human, animal, and divine experience. Perhaps we were all getting a glimpse of what the new heaven and new earth will be like when all of creation, all of God’s universal and eternal village is at peace with one another once again.

FreerangeFriday: Take time to fill up your cup

I Hear With an Accent

Gratitude Upon and for the Water