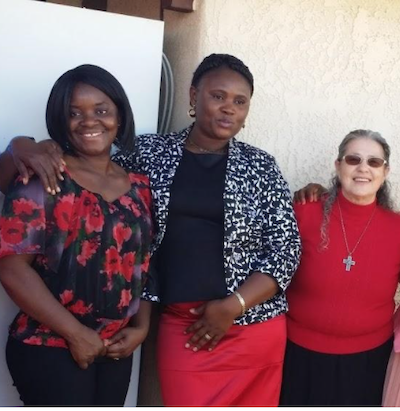 text and photo (used with permission by the women photographed) by June Friesen,

13 After the scholars were gone, God’s angel showed up again in Joseph’s dream and commanded, “Get up. Take the child and his mother and flee to Egypt. Stay until further notice. Herod is on the hunt for this child, and wants to kill him.” 14-15 Joseph obeyed. He got up, took the child and his mother under cover of darkness. They were out of town and well on their way by daylight. They lived in Egypt until Herod’s death. This Egyptian exile fulfilled what Hosea had preached: “I called my son out of Egypt.”

Refugee defined is a person(s) who has been forced to leave their country in order to escape war, persecution, or natural disaster. A few years ago, I was preaching on the text quoted above and as I read the passage a couple of hands went up in my congregation which is about 80% refugees. Jesus and his parents were refugees, they said. As Jesus’ parents fled to Egypt because of King Herod’s anger it was to protect Jesus’ life. For Mary and Joseph, they went to a country that they likely had never visited and quite likely they did not know anyone there either. In this story in Matthew, we know that Mary, Joseph, and Jesus were sheltered there safely and were able to safely return to their country within a few years, however, we are not sure of an exact date of their return.

In our world today, we have millions of refugees from several countries and for different reasons, however, most of these people literally are fleeing for safety of their lives either from persecution and/or starvation, the first one being the main one. It has been my privilege to work with several refugees over the past sixteen years. They are people who have fled from persecution of many kinds, of abuse, and imminent death. They are people who have traveled at night through the jungles with numerous dangerous animals as well as guerrilla warriors. At times they had to appear as if they were dead in order to survive. For some there were injuries along the way that left them with PTSD. For others, they had to sometimes leave behind a friend/family member as they were in the midst of fleeing because of death, severe injury, and/or illness. For others, there were diseases that they acquired either in the jungle fleeing and/or in the refugee camps. Some of these diseases led to premature death either in the camps or after they arrived in the United States. For some of these people, not only were they as adults affected but they saw their children affected by the complications of the diseases/injuries that they met along the way. Once they arrived in a refugee camp, there was protection as well as some medical help but was not always able to cure the issues completely. The adults did their best to get adequate care medically and physically especially for their children. In the refugee camps they await the day that they will see their family’s name on the list which says they can prepare to leave for another country – that country may be the USA, Canada, some areas of Europe, etc. Sometimes, it depends upon what country you lived in previously. Not always were they assured of what country would be their final destination but they knew it would be a haven from their past.

One family I have been privileged to be a part of from their arrival was a lady with two young boys with medical needs. She was single, she had to work, so what was she to do? There was a rather large settlement from her country already present and somehow, she connected with them and a young man stepped in and said he would care for her children when she was working as he had a different shift. I picked the lady and children up for church every Sunday. A few months after she was here, her settlement person had found better housing for her so we as a church showed up on a Saturday morning with several people and three pickups to move them. The man who was helping with her children asked who we were – he could not believe what was happening and that there were mostly Americans but also some other Africans. On Sunday morning, after the move, I picked her family up for church. When I brought them home, this man was there. He asked, “Where were you?”, and she said, “To church. This is the pastor.” He then told me that I would no longer need to pick them up as he would make sure they got to church and from then on, he attended as well. This couple were then married and have added two more boys to the home of their own. This man together with this lady have owned a home for several years now; they both work; he has completed a college degree and the two oldest boys have graduated from high school.

I celebrate Refugee Sunday (June 20, 2021) as it means so much to me to see opportunities given to people for life that is able to be lived in safety and with basic needs met. I celebrate as I see the resolve these people have to pay back others for what they have been blessed with. I celebrate refugees because I realize that Jesus, the Son of God, along with His earthly parents were refugees. However, in the midst of what I celebrate my heart is also grieved for the many refugees who are still dying because of persecution, starvation, etc. My heart cry today is for the many refugees who will never make it to a better opportunity. May we who say we are followers of Jesus, who, too, was a refugee, see the need to work towards helping others in need whether here in our own country or in the countries around the world. May we be willing to be good stewards of our resources that God has blessed us with in so many ways. I assure you that sharing our resources will yield great blessings. It will also bring great honor to the God we love and serve with our lives.

Today, June 19, 2021 is Juneteenth. We want to highlight our post from last year to celebrate.

I Hear With an Accent