Making Time for a Sacred Summer or Winter

As a child I often played in the Pastures by the river Aln opposite Alnwick Castle and I was always fascinated how after the bareness of winter everything began to bloom again. Each spring lambs would be gambolling on the grass and once summer arrived flowers would spring up peppering the meadow. It was a lovely place to sit and watch butterflies bobbing from plant to plant and listen to the bees busily buzzing around. As an adult it set me thinking. In the same way the destiny of a seed is to grow into a healthy plant our destiny as Christians is to grow in God.

Grow in God, strong in your inner selves.

2. Grow in God, and rooted in your faith,

Grow in God, Christ’s peace within your hearts.    © Carol Dixon  (music attached below)

When my son Colin worked on a farm I learned a lot of lessons from the activities he got up to especially at the busy times of lambing or harvest. It gave me great food for thought in my spiritual life as I pondered on the sowing & reaping and the new birth that is seen in different ways at different times of the year and I marvelled at the amazing intricacy of life in its many forms. Gary Davies in his book ‘A handful of seed’ says, “If you had never observed the processes of nature before & were given a tiny seed, you couldn’t possibly guess the startling form of life that lies hidden within it. It is a miraculous thing that within a tiny, inert and apparently lifeless speck lies the potential for new and greater forms of life.”

The prophet Samuel recognised the silent, secret life of the Spirit within a young farm lad who was brought in from the fields where he was looking after the sheep (the lowliest of lowly jobs) and at a family meal anointed him as the future king. It was years and years though before the prophecy came to fruition – David was 30 when he became the ruler of Judah and 37 before the Northern kingdom of Israel capitulated and accepted him as king of the whole nation. Yet during all those years from teenager to thirty year old David knew he was God’s anointed, despite his outward circumstances.

David remembers
King?  Me?  You’re joking, God.
I’m just the lad who looks after the animals –
The youngest in the family, of no account.
Yet you chose me,
The insignificant one,
Who looks at the heavens,
Sings songs on the hills,
And spends his nights counting sheep,
Taking care of the flock.
So that’s it God; taking care of your flock,
Being your good shepherd;
Well I reckon I could do that
If you stay with me
And lead me where you want me to go;
Not only with me by the still waters
But through death valley as well:
The table spread before me
In presence of my enemies,
Not just my family and friends,
As it was when you anointed my head with oil
– The cup was full to overflowing –
And I was consecrated as king!
Maybe one day God – stranger things
Have happened to those who follow you.
Meanwhile I’ll go on minding the sheep;
Keep me in your presence forever.   © Carol Dixon

If we think about our own lives, sometimes it isn’t obvious to see how the Holy Spirit is working in us. Sometimes we are so busy that we haven’t time to discern our destiny of how we can bring God’s kingdom to fruition personally and among those around us. Even in times of enforced inactivity we fill our minds with random thoughts rather than heeding God’s invitation to rest with him in our imaginations by still waters, soaking in the healing, restoring life he offers us when allow ourselves time to settle in his presence, confident that no matter what life throws at us, we are safe in the love of God, seen in Jesus our Good Shepherd.

A few weeks ago I was in hospital and the scripture that held me in God’s presence was the song most associated with David, the shepherd boy: Psalm 23.

The Lord Is My Shepherd

The Lord is my shepherd and I want to follow
Wherever he leads me, wherever he goes.
Over the mountains, the waters and byways,
Valleys and highways, he’s waiting for me.

I want to go to meet him there,
To lay myself down in his love.
The Lord is my shepherd and I want to follow
Wherever he leads me, wherever he goes.

And while on the journey to where we are going,
He promised to be there, to help us along.
And over the mountains, we’ll walk on together,
to know all the wonders he’s given to me.

I want to go to meet him there,
To lay myself down in his love.
The Lord is my shepherd and I want to follow
Wherever he leads me, wherever he goes.

Another favourite of mine is a modern version of the Psalm written by my friend, Revd. Carla Grosch-Miller:

This I know: my life is in Your hand,

I have nothing to fear.

Beneath the while of what is

Is a deep down quiet place.

You beckon me to tarry there.

This is the place

Are fed, the place

In times of terror or peril

I lean into You;

Your eternal presence comforts me.

I am held tenderly.

In the midst of all that troubles,

That threatens and diminishes,

You set abundance before me,

You lift my head; my vision clears.

You are my home and my hope,

My strength and my solace,

And so shall ever be.

In the lush pastures of life that hold meeting places with love,
may your feet know the way to find them.

By the still waters of the running stream,
may your hands shape a cup it and drink deep from it.

In the valley of death’s shadow that threatens,
may your sense of life find the way through.

At the banqueting table set before your enemies,
may your cup be full and overrunning.

Like the anointing oil that runs down your head,
may the blessing that is you spill into the world with eternal promise.

In the way a shepherd’s staff wards off lameness from fear,
may trust be your protective companion on the way.

Through each day’s living as it unfolds,
may goodness and mercy make their way into every moment.

At the doorway to the house of the Lord,
may you recognise your home and your hearth.

And in the song that makes a dwelling-place in your heart,
may its music rise in your soul. Amen. 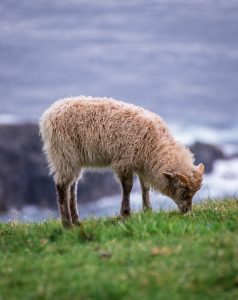 by tomas malik on unsplash.com

Another psalm that speaks of God shepherding us is Psalm 100. Roger Jones’ musical ‘Saints Alive’ includes one of the most joyful versions of it that I’ve heard. I hope you enjoy it as you sing along.

A Parable: The Murky Pond

Musings from a Sacred Summer

Awe in the Ordinary