St Columba’s Day – which is celebrated on 9 June – is significant this year as it is the 1500th anniversary of his birth in 521 AD. Although his Saint’s Day is actually the anniversary of his death, (he was born on 7 December) this week and the weeks following are a good opportunity to commemorate his life and influence through the ages.

Looking at his life Columba doesn’t seem to be ideal material for sainthood. An Irish nobleman, he is believed to be the great grandson of the famous 5th century Irish High King, Niall of the Nine Hostages and following his education, Columba became a deacon in the church. Columba was volatile and warlike and was eventually banished from Ireland for going against the King’s wishes and starting a feud (over a holy book!) that eventually ended in a battle in which many on both sides were killed so as a penance Columba was sent away from his beloved homeland.

Yet, it was through this enforced exile that Columba and his few Companions came to land on Iona where they started a small religious community and the influence from this inauspicious beginning spread the Christian faith far and wide in Scotland and beyond. The effect of what became known as Celtic Christianity is still felt today and various hymns we still sing have been attributed to him including the prayerful ‘O God thou art the Father of all who have believed’:

I first learned about the story of Columba through taking part in my church in a musical ‘Dove of Iona’ based on his life written by a friend of mine, Rose Reeve who died a few years ago after a long battle with cancer. The musical had a great impact on all who heard it and was performed at the Edinburgh Fringe (and other places such as Durham and the Isle of Iona) before Rose became seriously ill and her beautiful song ‘Peace’ was sung at the thanksgiving service for her life. [The music below is from a live performance with actors & singers, used with permission.]

The story of Columba gives me great hope. It teaches me that however flawed I am and no matter how many mistakes I make, when I turn to God and follow the way of Jesus, great things can happen to bring about the spread of God’s kingdom. I am fortunate to live near the Holy Island of Lindisfarne which under the influence of St Aidan from Iona became the cradle of the Christian faith in England. I have only visited Iona once but in many ways it was like visiting a homeland only heard of from distant relations yet the spirit that pervades both islands is the same Holy Spirit, the gift of Jesus that pervades our lives when we tune into the promptings of God.

Like many of the Celtic Christians who followed him, Columba enjoyed the wonders of God’s Creation. Following my visit to Iona I wrote a hymn celebrating finding God in the beauty of the natural world and set it to the well-known tune St Columba.

1 We draw apart from busy life
to set aside some space
and see afresh with open eyes
the beauty of this place.

2 We glimpse each separate grain of sand,
gold glistening on the shore,
and hear the haunting seagulls’ cry
above the breakers’ roar.

4 We join with all creation’s choir
and sing of God’s domain,
the love of Christ in empty hearts
now raised to life again.

5 Refreshed in body, mind and soul
we return to daily round,
our eyes and ears attuned to God,
to serve with love new found.
© Carol Dixon 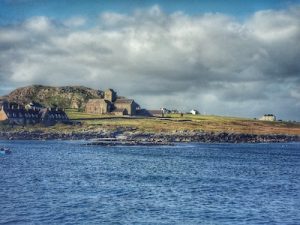 by Lynda B on unsplash.com

Oceans: Abundance of Life and Plastic