FreerangeFriday: The Cup of Receiving

This week we celebrate the Ascension… Jesus returning to the Father and leaving the disciples to carry out the mission of love that Jesus began. But they aren’t asked to do it on their own. In Acts 1, Jesus tells them to go back to Jerusalem and WAIT for the gift of the Holy Spirit that he has promised to send to them.

In my former book, Theophilus, I wrote about all that Jesus began to do and to teach until the day he was taken up to heaven, after giving instructions through the Holy Spirit to the apostles he had chosen. After his suffering, he presented himself to them and gave many convincing proofs that he was alive. He appeared to them over a period of forty days and spoke about the kingdom of God. On one occasion, while he was eating with them, he gave them this command: “Do not leave Jerusalem, but wait for the gift my Father promised, which you have heard me speak about. 5 For John baptized with[a] water, but in a few days you will be baptized with[b] the Holy Spirit.”

Then they gathered around him and asked him, “Lord, are you at this time going to restore the kingdom to Israel?”

He said to them: “It is not for you to know the times or dates the Father has set by his own authority. 8 But you will receive power when the Holy Spirit comes on you; and you will be my witnesses in Jerusalem, and in all Judea and Samaria, and to the ends of the earth.”

After he said this, he was taken up before their very eyes, and a cloud hid him from their sight.

They were looking intently up into the sky as he was going, when suddenly two men dressed in white stood beside them. “Men of Galilee,” they said, “why do you stand here looking into the sky? This same Jesus, who has been taken from you into heaven, will come back in the same way you have seen him go into heaven.”

Then the apostles returned to Jerusalem from the hill called the Mount of Olives, a Sabbath day’s walk[c] from the city. When they arrived, they went upstairs to the room where they were staying. Those present were Peter, John, James and Andrew; Philip and Thomas, Bartholomew and Matthew; James son of Alphaeus and Simon the Zealot, and Judas son of James. They all joined together constantly in prayer, along with the women and Mary the mother of Jesus, and with his brothers.” 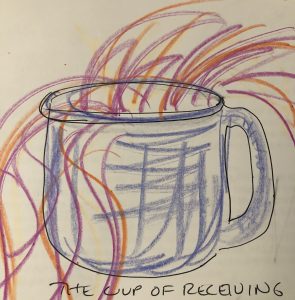 THE CUP OF RECEIVING

PICK UP YOUR CUP AND HOLD IT

Consider all the things you’ve been waiting on, and waiting for this year. It’s been a year of waiting. Maybe, like the disciples, you don’t know just what to expect. Maybe you are feeling frustrated by all the emotions of the past year, all the losses and the changes. Talk to Jesus about this. TAKE A DRINK FROM YOUR CUP AND RECEIVE HIS PEACE.

We read in ACTS 1, that the disciples still didn’t really get what Jesus was all about. They wanted to know about times and dates and the end of the Roman rule. Even in their final days with Jesus actually present with them, they seemed to miss the point. Even after three years of being with Jesus everyday, they were still confused about their purpose. Jesus doesn’t shame them, or get frustrated with them. Instead he just reminds them that their mission is to go into all the world and be his ambassadors of love. Jesus believes in them even when they don’t understand. He knows that when they receive the Holy Spirit they will remember!

HOLD YOUR CUP. Have you forgotten about your purpose? Have you gotten caught up in worrying about what’s going to happen when, rather than just following Jesus? Do you need help to remember? Talk to Him about where you are today.

HOW DO YOU NEED TO BE REMINDED OF YOUR MISSION, YOUR PURPOSE? Allow Jesus to show you.

DRINK FROM YOUR CUP AND RECEIVE YOUR MISSION, YOUR PURPOSE AGAIN!

“But now that I’m about to leave you and go back to join the One who sent me, you need to be told. Yet, not one of you are asking me where I’m going. Instead your hearts are filled with sadness because I’ve told you these things. 7 But here’s the truth: It’s to your advantage that I go away, for if I don’t go away the Divine Encourager[c] will not be released to you. But after I depart, I will send him to you”. JESUS ~ JOHN 16:5-7

Like the disciples, Jesus knows that you and I cannot do any of this mission of love on our own. We get too easily side tracked by life. We get too tired, too confused, we get bitter. We really do need a Helper. We need a Counselor.

We need to RECEIVE THE HOLY SPIRIT.

DRINK FROM YOUR CUP TODAY and imagine receiving the encouragement of the Holy Spirit. Imagine receiving the comfort and peace of the presence of the Spirit. As you drink from your cup today, know that Jesus believes in you just as he believed in his disciples on Ascension Day!

DRINK FROM YOUR CUP and RECEIVE THE PROMISED HOLY SPIRIT.

LET’S RECEIVE THE POWER TO BE THE PEOPLE WE ARE CALLED TO BE AND BE the PEOPLE JESUS BELIEVES US TO BE!

Sign up to join us for this virtual retreat experience Making Time for a Sacred Summer with Christine Sine and Lilly Lewin! 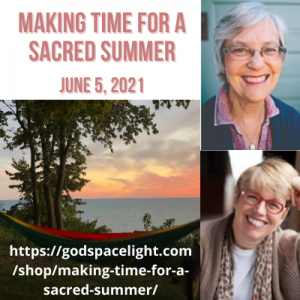 Reimagining Flourishing In The Turbulent 2020s

Freerange Friday: Way of Seeing, Way of Being

freerangefriday: The Gift and Lesson of Sabbath Rest

freerangefriday: Update on the Ashes of Lent

FreerangeFriday: Praying for Peace for Ukraine