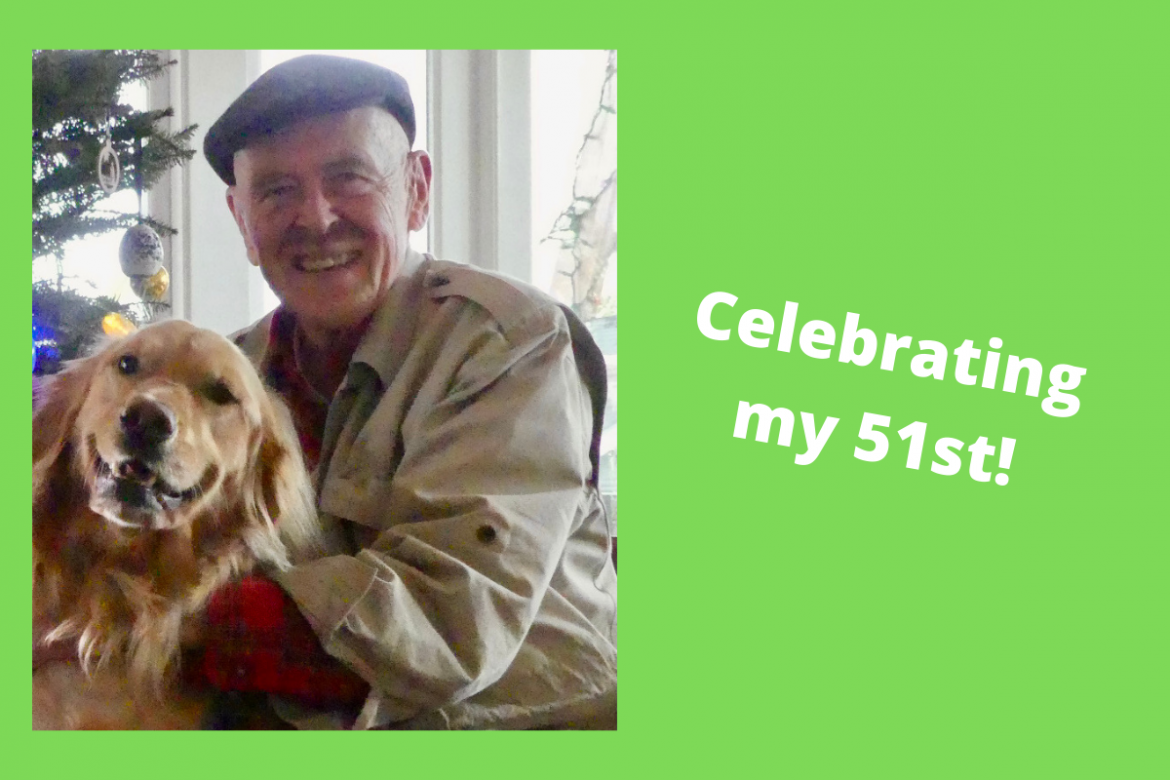 Celebrating my 51st Anniversary. I realize from looking at the picture that I look a little older than 51. Let me explain. This story begins on that first Earth Day, 51 years ago. We all need to celebrate this remarkable anniversary and strongly support those working for Climate Justice in the 2020s!

On April 22, 1970, I was working as the Dean of Students at Maui Community College in Hawaii. I heard an announcement that James Dator, a political scientist from the University of Hawaii, was coming to speak on the subject of America’s First Earth Day. I was curious and had no appointments so I joined 40 students and a handful of fellow staff members to hear Dr. Dator.

Dr. Dator spoke compellingly about a range of environmental and political challenges that we would face in the future. I was totally overwhelmed by his presentation. The more he spoke, the more troubled I became. As a young 30-something, I prided myself on keeping up with what we used to call “current events”. However, I had no sense that the world was changing or a host of new challenges threatening our common future.

Immediately after Dr. Dator concluded his address, 35 students started heading to a motel three blocks along the coast from where the community college was located. I joined them. They stopped at a grocery store and purchased over 50 large black garbage bags. When we reached the motel, we saw that it was beautifully situated on the beach overlooking the ocean. But we also noticed that the beach was covered with huge mounds of garbage from the accumulated waste of the past week. Apparently the motel routinely placed their garbage on the beach for the ocean to take away.

The students bagged over 50 huge bags of the garbage and brought it into the lobby of the motel. The manager of the motel immediately flew into verbal rage ordering the students to put the garbage back on the beach. They refused and we literally spent the rest of the day in a protest of this environmental pollution. By the end of the afternoon, after many heated conversations with the manager, he finally caved in and promised to secure garbage services in the future and the students transported the garbage to the dump.

The students I was with were delighted. I suddenly realized my future had just been turned upside down. Three months later, I was on a plane to Seattle to start a doctoral program at the University of Washington. My major focus was in intellectual history. However, I persuaded my advisor to allow me to create a minor area of study in strategic foresight. His approval enabled me to take courses in urban planning, business forecasting and the social management of technology. I also taught in this program for three years at the UW.

While I was very interested in intellectual history, my wake up call in Hawaii focused me with a desire to enable Christian leaders to learn with me the importance of how to:

As I became acquainted with several of my professors at the UW, I shared with them that several states had created statewide projects to address these new environmental challenges as well as societal changes in the 80s. These included California Tomorrow and the Maine Manifesto.

We were able to secure a meeting with governor Dan Evans, the Republican governor of the state of Washington at the time. As we described some of the other state futures projects, Governor Evans started to become interested. In fact, he decided to actually launch a Washington 2000 project that started with several thousand citizens from all over the state convening to learn how citizens could participate. The two professors and I were invited to participate in that first meeting.

Another new Christian friend of mine, who had arrived in Washington the same week I did to become the President of Whitworth College, was Edward Lindaman. Lindaman had just left a position heading the Apollo Space Craft Project. His first action at Whitworth, out of his concern for the environment was to start an alternative food program for students.

Ironically, the professor for my first class at the UW was Utopia Dystopia. It was taught by Science author Frank Herbert. Frank was also glad to get involved in the state futures prime project, too.

Dan Evans asked Edward Lindaman, president of Whitworth College, to head the Washington 2000 futures project. However, it was the only state futures project that invited a citizen participation from all over the state of Washington. Remarkably Governor Evans actually used the input from citizens to change the policy in areas of environmental stewardship and other areas as well before we left office.

I finally graduated from the University of Washington with a PhD degree in history and my minor in strategic foresight. In 1981, I published my first book, The Mustard Seed Conspiracy, in which I challenge church leaders to learn from business innovators and urban planners about the importance of anticipating the incoming waves of change so they have time to respond. The book did very well as the first of my 10 books. My latest that I’ve co-authored with my friend, Dwight Friesen, is titled 2020s Foresight: Three Vital Practices for Thriving in a Decade of Accelerating Change, published with Fortress Press.

I’ve also enjoyed teaching courses on Christian Worldview at Fuller Theological Seminary at the extension in Seattle for 32 years. We always focused on the importance of not only anticipating the new waves of change but also exploring the ways that western culture has shaped our personal and societal values in ways that are often in tension with the gospel of Jesus Christ.

RU READY BOOK STUDY
Consider doing a study with friends or in classes using 2020s Foresight: Three Vital Practices for Thriving in a Decade of Accelerating Change. Dwight Friesen and I wrote it with questions at the end of each chapter.
>Free 45 minute webinar called “RU Ready?” to start your study
> I am available to Zoom in one of your least sessions at no charge if you book ahead.
THIS IS YOUR OPPORTUNITY TO GET READY FOR 2022 AND BEYOND!

FreerangeFriday: Drinking in Peace and Forgiveness