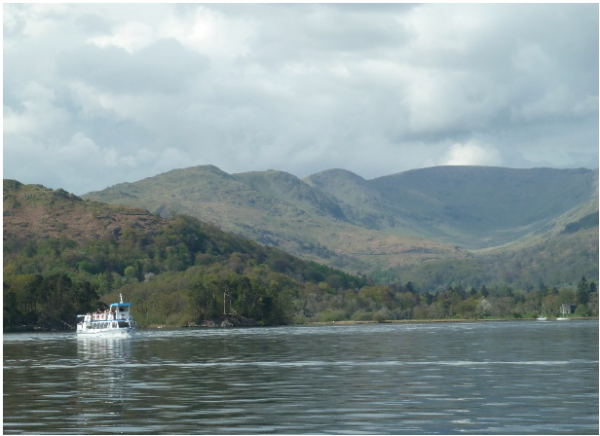 Earth shall be fair and all her people one

Let us celebrate as we sing of our joy in God’s creation.

We who endanger, who create hunger,
Agents of death for all creatures that live,
We who would foster clouds of disaster,
God of our planet, forestall and forgive!

Let there be greening, birth from the burning,
Water that blesses and air that is sweet,
Health in God’s garden, hope in God’s children,
Regeneration that peace will complete.

God of all living, God of all loving,
God of the seeding, the snow and the sun,
Teach us, deflect us, Christ reconnect us,
Using us gently and making us one.

we confess that our creating often goes wrong.
We are sometimes ignorant, we are sometimes careless.
We are sometimes short-sighted and self-interested.
Let us be aware of our failures in creation……….
Forgive us, gracious God.
We long to live in harmony with all that you have given to us.

God is always the creator and the re-creator.
Let us celebrate the recreation which is offered to us at this moment!
Response: Praise you Lord for your love which is seen in all the earth,
Reaching out to us all, offering the world new birth.

A STORY CELEBRATING THE WONDER OF CREATION

Before the beginning there was only God and nothing else at all. On the first day that all things started, God sent his Spirit winging over the emptiness that was not himself, like a white bird over a grey and tumbling sea…..

On the first day God said, ‘Let there be light,’ and the sun came up like a shining new penny over the empty sea, and that first night there was a riding moon, and the stars were like a million holes in a blue velvet sky….

Then there was a week of making; such a week as God had not known before. Dry land came like a whale out of the water, and on the land, grass – green as gooseberries – and gooseberries themselves, and great trees thrusting up out of the warm earth, their leaves whispering in astonishment at the breeze. In the sea below the un-trodden beach there was the silver flicker of a thousand kinds of fish, and beneath them in the great deeps the sea monsters, Leviathan and his kind…..

To fly in the sky, God made winged creatures: butterflies, pretty as paint; dragon-flies like jewels in the air; and all manner of birds – from the one-inch humming-bird which can also fly backwards, to the great albatross soaring over the ocean like the Spirit of God…..

God made creatures to live on the dry land. He made the dappled fawn standing in the glade by the pool. He made the giraffe, so proud, so very proud, saying to all beneath him, ‘Oh, who but me has a neck like a fire escape?’….

He made the lynx with the long tail, and the Manx cat with no tail, and the wise grey elephant with legs like logs and a tail at both ends. From the small snail with his fragile house on his back to the tawny lion, king of the jungle and needing no house, God made them all….

Last of all, God said, ‘I will make human beings in my likeness and after my image.’ So out of the dust of the earth God formed the first man and breathed life into his nostrils. And the first man, Adam, stood on the new earth and looked into the eyes of God. And he was not afraid….

A story to reflect on

Once upon a time there was young man who lived in a beautiful kingdom. One day the king sent for him and said’ I would like you to become the royal gardener and look after my garden while I take care of the business of looking after the kingdom. You must keep it in good order and nurture the plants so there will be enough for all of my people’. The young man was delighted and set to with a will but after a while he grew tired of catering for everyone and started growing only what he liked, and plants to fuel his own fire and he fenced off parts of the garden so only he could use them. Then he thought ‘This is too much work’, and he converted the part of the garden furthest away from his house so his neighbours had nowhere to grow their plants to feed themselves and their families and they soon began to starve. They said to the young man ‘Please can we share your food since we can’t grow any of our own’. But he told them ‘No. I won’t have enough for myself,’ and he built a big wall to separate him from the rest of the people. Gradually though his part of the garden stopped flourishing and the plants began to die, the diversity had disappeared the huge wall blotted out the sunlight and he began to starve. He got in touch with the king and asked him to make the garden beautiful again. The king said ‘I have been trying to get in touch with you for a long time but you have ignored my calls. I wanted to help before it got too late but now there is nothing I can do about it. Our beautiful world is spoiled because of your selfishness.’ And he banished the man from his kingdom to wander the wasted earth.

My friend, Sheila Hamil, wrote a song about the dangers of erecting walls around ourselves.

I first heard a version of the anonymous allegorical story above in my teens in the early 1960s when lots of green spaces were being taken over for building projects and pollution and starvation in parts of the world were becoming an important issue. Sad to say, the problems haven’t gone away but luckily for those of us who believe in Jesus our version of the story doesn’t end there. God intervened and sent his own son to clear up the mess and through his sacrificial love and forgiveness repairs the problem & invites us to work alongside him to heal the world.

LITANY OF CREATION AND CREATING

Let us affirm the wonder of creation together:
God spoke light into the void
and the light is in our hands
against the darkness.
God clothed the world with sky
and we ride upon the wind
and breathe among the leaves.
God gifted us with earth
and with water in between.
We dig and float and drink and grow
and know the power of earth and sea.
We paint and sing and work and dance
in company with God.
We share the earth with all that is
in harmonies of warm and cold,
in green and desert, crowd and lone,
we feel the pain, we feel the joy.
God is our father and our mother,
Christ is our brother, the Spirit within us.
We celebrate our sharing in the recreating of the world.

Let us sit still among the pain of the world. Silence
Let us name some of the pains of the world…..(in silence or aloud)
Beside each other, within the earth,
part of the earth and of the earth,
we are vulnerable with her, and are her people.
We are people of pain and fear,
we are people of anger and joy,
we are people of compassion and grace.
We are one with each other,
and one with God.
In all of us is a longing
for a life that has not yet come,
for a world that is free and just,
a dream of hope for all people.
Together with God
we will create that possibility.

We ask for grace to see
that we must change our ways,
as guardians of this precious world –
Live simply every day.

Lord, give us thankful hearts
for all that we possess,
and help us share more generously
with those who have much less.

Praise God, the king of earth
Praise Jesus Christ the Son
and praise the Holy Spirit’s power
who joins us all as one.

Let us go forth and share in the recreating of the world.
We go in faith to be the people of the new creation.

BLESSING (to each other)

May the sun warm your soul and the moon be gentle above you.
May the Creator hold your hand and the Christ walk in your footsteps.
May the Spirit dance in your playing and grace be found in your way. Amen.

This new bundle is on sale until May 11th and includes our best selling book, To Garden with God and The Gift of Wonder Prayer Cards. 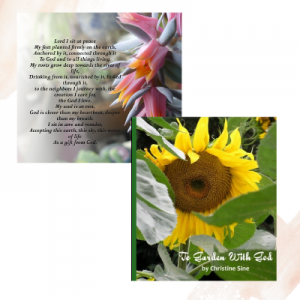 Time to Love and Knit