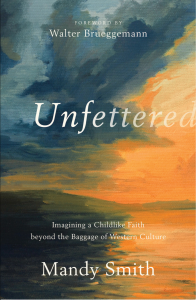 It’s a common question and one I’ve asked many times in many ways. It paints God as oblivious, distant, uncaring. As many times as I’ve asked it, I’ve never found a satisfying answer. But the way Mark’s Gospel tells the story makes me think again.

“First Mark invites us to a meal where a woman upsets the proceedings by pouring a jar of perfume worth a year’s salary on Jesus’s head. She goes against all sense of decorum and common sense. What a scene! What a waste! Her behavior flies in the face of all that empire values. But she is anointing a different kind of king. And unlike the others in the room, Jesus welcomes her actions. He embraces this outcast who knows the abandon and the abundance of kingdom. The others misunderstand, they shame, they disregard. He could choose to acquiesce to their expectations of him. But Jesus is driven by something better than their approval. In pressing toward it, he dies this social death.

Next, we’re welcomed into another room and another meal. This time Jesus celebrates Passover with his disciples and, even as they eat, Jesus predicts that one of them will betray him and that the rest will desert and deny him. At the moment when their friend needs them the most, when he is most clear about who he is and what the kingdom requires of him, they will flee. Knowing this will happen, Jesus could just drop the plan, go back to a normal life, set aside the conflict that his choices are bringing. But he presses on toward kingdom, even when he knows his own friends will choose comfort and safety (and, in some cases, empire). In pressing toward kingdom, Jesus dies this relational death.

Then Mark takes us to the scene in the garden of Gethsemane and lets us see just how much Jesus is breaking under the weight of this kingdom vision. The waves threaten to smash this clay vessel to pieces. He throws himself to the ground in distress, agitated beyond description. He cries out to the Father as a child cries, torn between a desire to be obedient and a deep, bodily sense of what it will cost. Will this emptying of his will leave him with no self left? And even in the face of his friends’ rejection, even in the midst of this angst, Jesus again chooses kingdom. In so doing, Jesus dies an emotional and existential death.

The day should be dawning after this excruciating night, but Mark’s telling only gets darker as we find Jesus facing a trial before the religious leaders. Empire is looking for a reason to put him to death. Empire asks “Are you?” and Jesus says “I am.” It’s all empire needs to hear to do away with him. He could have continued his silence. He could have questioned his own call. He could have returned to Nazareth. But once more something better than safety drew him forward. He has already died to social status, emotional security and existential equilibrium, and his own will. Now, in the face of impending physical harm, he dies to his own self-preservation instinct. He dies to any claim empire might have on him. He does so because of the claim that kingdom has on him. These deaths allow him to welcome the kingdom as a child. And then comes the final death.”

As Christians, we talk a lot about Jesus’ death but for those of us still living, it can seem rather distant, even abstract. What difference does his death really make if the world is still so broken? So it helps me to see how many deaths Jesus died, well before he hung on that cross. On a daily basis he died to his own comfort and convenience and control. In his desire to keep pressing toward the Kingdom, he lost friends, safety, stability. He was misunderstood, betrayed, forsaken, denied, accused by people he trusted—each choice a death to his relational and social and emotional well-being. He knows that to be like us is to experience all those levels of human life (and death).

Yes, it’s natural for us to ask, “How could a loving God . . . ?” And when we do, we imagine we’re the ones suffering while he’s sitting far off in a distant, cosy heaven. But Jesus has solidarity with us in our suffering, as we have solidarity with Him in His.

“Christ’s sacrifice of himself for us . . . is not only his death on the cross, but the psychological, spiritual and personal alienation. . . . When our sufferings are joined to Christ’s they become redemptive for us personally.”  –Thomas Keating.

Excerpt from Unfettered: Imagining a Childlike Faith Beyond the Baggage of Western Culture by Mandy Smith, adapted for Godspace blog.

Originally from Australia, Mandy Smith is a pastor and author of The Vulnerable Pastor: How Human Limitations Empower Our Ministry (IVP). Her next book, Unfettered: Imagining a Childlike Faith Beyond the Baggage of Western Culture (Brazos), releases in May and is available for pre-order. Mandy and her husband, a New Testament professor, live with their family in a little house where the teapot is always warm.

Spirituality of Gardening Online Course makes a wonderful gift for this Spring season (or for a pick-me-up in Fall)!

FreerangeFriday: The Easter Cup of Doubt

I believe that nominal Christians and some non asks this ?. This could be 80% in a nominal church. I am told that only 20 % of these church members support the church.

But we Evangelical Christians that are in a Bible believing church believes that we as children have faith in Jesus.
(You have written about a child.) So, just as we have devout parents. these churches believe the Bible that we are family # 1 Jesus came to represent the Father.
#2 We are His heirs.and co-heirs with Jesus Romans 8 v 15 “Abba Father+ = Daddy & v 17.

“So “how can a loving God allow bad things” is like parents disciplines Hebrews 12 vs 5-11. When mom hit me with
branches that she made me get, then hit me on my naked buttock it hurt, ‘
Now, there are those that ask “How can a loving parent hurt a child” such that no longer can we do this!
Even in the 6th grade, when the teacher used a 12 inch ruler with the palm stretched out would hit the child with it
that hurt! So, I dont’t think that such can be done now.either.