I was reading a book called ‘Celtic Christianity’ some years ago when I found the most beautiful translation, by James McKay, of an ancient 5th Century prayer attributed to St Patrick. In it the saint asks for God’s protection, and we know it today as ‘St Patrick’s Breastplate’.

Now the cynics among us might want to quip, “Well God doesn’t seem to be doing a very good job at the moment, protecting us, does he!” But we might argue, “Isn’t it far better to be wrapped in God’s safe arms and loving care, rather than to wander through life aimless and lost and frightened? It’s a comfort to know that living or dying, we are his regardless, now and through eternity!”

My call to ministry initially came while singing a hymn based upon St Patrick’s breastplate, called ‘I Bind Unto Myself today’. So this particular piece of writing is very special to me, so much so that I wanted to put my own music to it.

Gift of Wonder, Breath, and Celtic prayer cards are all on sale for St. Patrick’s Day!

Today is the last day to take advantage of the sale! 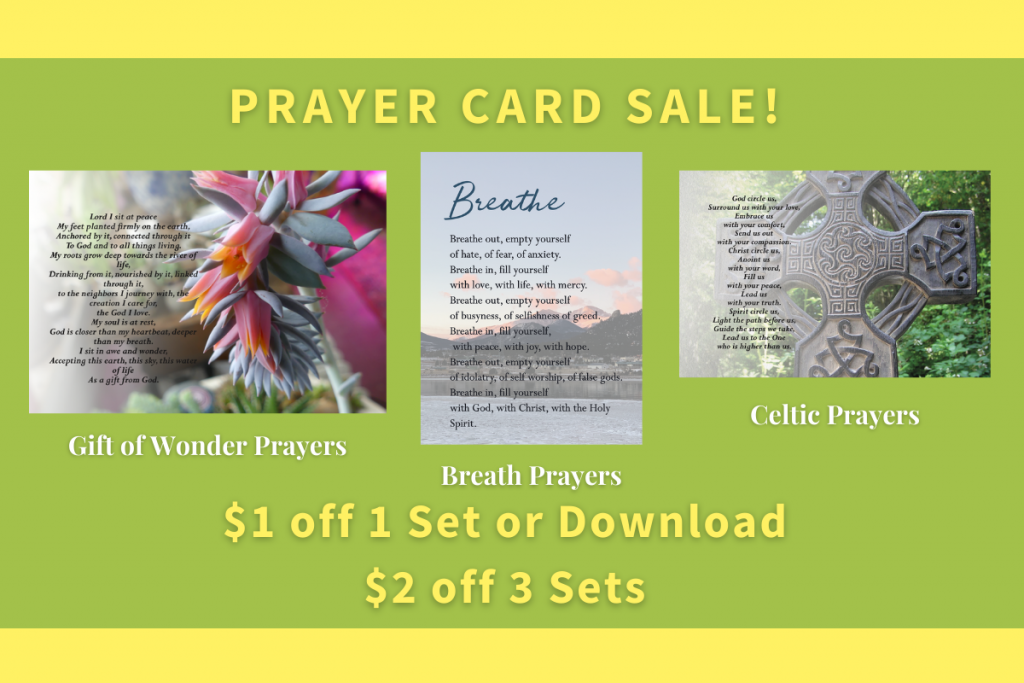 This is the 1st time I feel frustrated when reading & hearing the video by Shiela Hamil. I wish that I could see the entire
song so that I could comment on each segment of it.
I watched it 3 times without being able to write it. This is what I did get:
When she recognized the trinity she felt God’s love.
Bright sunlight white moon wind wildness.
She wanted to accept God with her eyes, ears and minister to others using these 5 senses.
She quoted St. Patrick’s declaration that Christ is everywhere near his body and within him.
Later, on my TV I heard a guest cover this declaration. Years ago John Michael Talbot the St. Franciscan monk balladeer sang it.

I am in the process of writing a booklet. about light & darkness. Her statement that “whiteness of the moon: is special for me: I saw 3 plaques on the wall of a church room: One had black lettering about the desire to have more love from God.. The second Jesus is love in white.. So my conclusion is that the more we absorb God’s love the more that we
can share the love of Jesus to others. In the natural the color black is that all the wavelengths of light are absorbed. White is that all wavelengths of light are reflected off. We know that the moon’s light is reflected from the sun. So, it
is the brightness that is seen better at night. So perhaps we can minister God’s love to others when they are in the dark
spiritually.

One of the reasons that I want to comment in the segments of this message just the new things as listed is the 1st picture is purple strands shaped like the 1st half of a kayak. I have zinnia seeds from Ferry-Morse Seed company. They have dyed the kayak shaped seeds purple. Of course, you use a lot of objects in your messages.
In watching Christian TV the man leader wore a gray stripped shirt like I am wearing now, for the 1st time.
Now, while watching an e-mail teaching the teacher used :the phrase “like a shimmering light” while I had shimmering sunlight from my window.
This gave me the incentive that he used his hands to minister the Holy Spirit gifts. So my prayer is that I use my hands to share Bible truths that is a blessing to me as I write them down.