On March 17th, we celebrate St Patrick’s Day, and for me it is a great time to celebrate the many ways in which this stream of Christianity has enriched my life.

One of my favourite places in the world is the island of Iona off the west coast of Scotland. It seems so remote now, requiring a journey from Glasgow by train, ferry, bus and another ferry to get there. At one time, when most long distance travel was done by sea, it was a thriving centre of spirituality and education. It was here in the 6th century that the Celtic saint Columba settled after being exiled from Ireland. And it was also here that the famous Book of Kells was probably written. 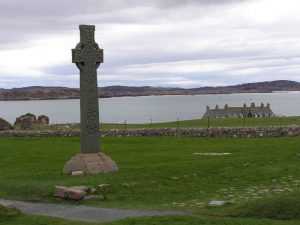 My husband, Tom, took me to Iona on our honeymoon 29 years ago, sharing with me not just a place but a Christian tradition that was very special to him. My imagination was ignited by this ancient faith perspective which thrived from the fifth to eighth century and was responsible for the spread of Christianity from Ireland through Scotland, England and much of Western Europe. It offered so much of what I craved—an intense sense of the presence of God, a spirituality that permeated every part of life and a love for creation as a reflection of the character of God. It is possible that St. Francis of Assisi was strongly influenced by the Irish monks who established a chapel near Assisi.

Scottish theologian, Prof John Macquarrie observed that “the Celt was very much a God-intoxicated person whose life was embraced on all sides by the divine Being.” I long for that same intoxication and intimacy with God.

The primary site for worship, pastoral care and religious instruction for Celtic Christians was the monastery not the parish church. This strongly monastic character produced a model of ministry that was communitarian rather than individualistic.

A common misconception is that these early Celtic monks fled to the wilderness and devoted themselves to prayer, fasting and other extreme activities. However, usually, these settlements lay at the crossroads of major travel routes, whether by sea (as in the case of Iona) or land (like Clonmacnoise on the banks of the river Shannon, in Ireland). They were intentional about living the God-filled life at the heart of contemporary culture and business.

These monastic communities were open to a constant stream of visitors, pilgrims and penitents. They were intimately involved in the affairs of the world and the lives of the people they served. The monks were not just concerned with the spiritual wellbeing of the communities they served but also with their intellectual and physical wellbeing. They were also, in many ways, the keepers of culture and tradition, not just copying the Psalms and Gospels but also writing down stories, songs, and poems and preserving myths and legends for posterity.

The Celts approached God with awe, reverence and wonder, but also saw God as an essentially human figure intimately involved in all creation and engaged in a dynamic relationship with it. This interweaving of intimacy and mystery embraced the Trinity as a family, and each human family unit (be it family, clan or tribe) was seen as an icon of the Trinity. The Trinity was a very real presence in all aspects of life and creation, and an almost tangible Comforter and Protector who could ward off evil forces. We see this theological perspective reflected in this simple prayer.

I love the Celtic belief that only a thin veil separates this world from the next. They took seriously Hebrews 12:1 (“Seeing we are compassed about with so great a cloud of witnesses…”), so a Celtic Christian at prayer was consciously a member of the great company that stretched from the persons of the Trinity through the powerful angelic throngs to the risen saints. They were regarded very much as friends and companions in this world and addressed almost as one would neighbours or members of the family.

One of the most demanding and often costly tasks undertaken by the Celtic monasteries was hospitality. Celts believed hospitality was not only meant to be a custom in their homes, but also a key into the kingdom of God. The guest house, or hospitium, often occupied the best site within the monastic community, and though the monks might live on bread and water, visitors would often received the best of food and drink. The monastery at Derry is said to have fed a thousand hungry people each day. Brigit, who presided over the monastery at Kildare, often made butter for visitors. Tradition has it that when churning the butter, Brigit would make thirteen portions—twelve in honour of the apostles and an extra one in honour of Christ, which was reserved for guests and the poor.

One of my favourite Celtic prayers is this beautiful hospitality prayer attributed to Brigid, one of the best-known women leaders of the Celtic church.

Much of our knowledge of Celtic Christianity comes through their beautiful prayers, many of which were written over a thousand years ago, and then gathered in the Carmina Gadelica. The most famous Celtic prayer and another of my favourites, is Patrick’s breastplate, which I adapted a few years ago as a responsive litany. Patrick’s prayer is shot through with a deep sense of the presence of God and a confidence in God’s ability to protect from evil as we see here:

We bind unto ourselves today the strong name of the Trinity,

By invocation of the same, the Three in One, the One in Three.

Of whom all nature hath creation, Eternal God, Spirit, Word;

Praise to the God of our salvation, Salvation is of Christ the Lord.

As this prayer reveals, the presence of Christ was almost physically woven through the lives of the Celts. He encircled, upheld and encompassed them as a companion next to them, a guest in the house, a physical presence in their lives. I love the way that is expressed in yet another of my favourite Celtic prayers:

Christ as a light, illumine and guide us.

Christ as a shield, overshadow and cover us,

Christ be under us, Christ be over us,

Christ as a light illumine and guide us.

Celtic Christianity opened my eyes to the belief that creation is translucent, allowing us glimpses of the glory of God. The earth and its wonders provide the key not just to establishing the existence of God but also to learning about him. This is no pantheistic worship of the elements but rather a dynamic picture of God’s active presence in creation. God animates and charges all things with divine energy, and they in turn reflect and respond to God’s creative presence and sustaining love. God’s hands don’t simply encircle and protect the earth and all it contains; God also quickens, enlivens and inspires it so God’s existence can be confirmed through contemplation of the beauty and order of the natural world. 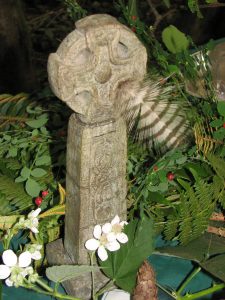 In this tradition, nothing is too trivial to be sanctified by prayer and blessing, whether it be dressing for the day’s work, milking the cow or damping down the fire at night. This sense of the importance of the little things parallels the Celts’ identification with the little people, the marginalized and the oppressed. All persons represented God and might be heavenly visitors in disguise. Extending hospitality opened a door to the kingdom of God and welcomed Jesus into their midst. It was an important expression of love both toward God and neighbour.

My own interest in the sanctity of ordinary, everyday tasks and the importance of finding God within them, and my growing emphasis on the importance of hospitality as a doorway into God’s kingdom is one of the most important practical lessons I have learned from the Celts.

Celtic spirituality continues to enrich my faith, and I often write and use Celtic-style prayers, many of which can be found in the Celtic prayer cards I have created. 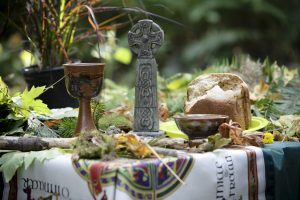 There is so much that we can learn from this ancient, future tradition whose followers saw themselves as guests of the world, living lightly on this earth and not becoming attached to possessions or place. They believed all of life was a pilgrimage, a journey towards God in which every experience and every encounter provided opportunity to both represent and learn about God.

Recognizing ourselves as guests and pilgrims affects how we view everything that happens to us. Pilgrims and those who travel frequently do not take anything for granted. They learn to be grateful for comforts that those who never leave home take for granted. For a guest, each meal, especially a home cooked meal, is a gift of love from the host. Each bed provided for us to sleep in is a generous act of sharing and caring. Everything is now a gift of God.

So as you go out into the world this week, think of what you could learn from this ancient tradition. Look for God in the translucence of creation and in the faces of strangers. Think of yourself as a guest of the world and prepare yourself for the amazing gifts God wants to lavish on you today – gifts of friendship, and food, gifts of fellowship and love and caring. And let me know what new things open up for you as a result.

Gift of Wonder, Breath, and Celtic prayer cards are all on sale as we look forward to St. Patrick’s Day!

Take advantage of this sale now through March 17th. 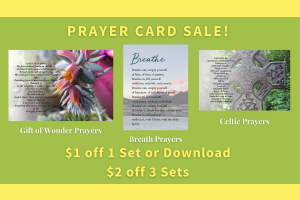 A Taize Style Contemplative Service for the Fourth Sunday in Lent

A Certain Slant of Light

Meditation Monday – A Circle of Light