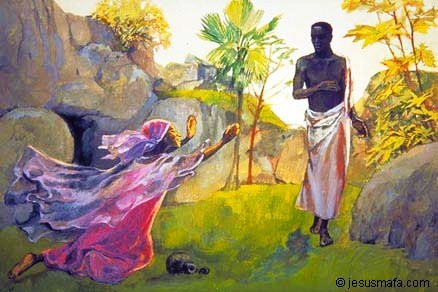 Today is International Womens Day, a day for celebrating the social, economic and political achievements of women. It was first celebrated in 1911 when women in most parts of the world still had few rights. As I reflect on this day, I am always reminded of my own challenges for equal acceptance within society and the church as well as the often overwhelming obstacles that other women have faced and still face in the battle for freedom.

One of those I always reflect on is Mary Magdalene. She has become one of my favourite New Testament figures. Because of that, I have decided to repost the article I wrote several years ago about her. I find as I reread it, it challenges me once more to consider this issue. It is another one of those places that we still need to find healing. 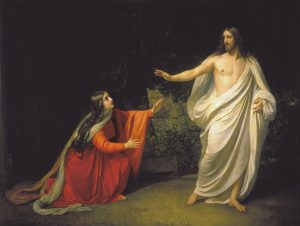 Mary Magdalene is one of the most misused and abused women in the Bible, a fitting symbol for women throughout the ages who are still misused, abused and blamed. Mary Magdalene was one of Jesus’ most dedicated followers. She was present at his crucifixion and the first to see Jesus after his resurrection. Yet what most of us believe when we think of Mary Magdalene is a “fact” for which there is no evidence. She is remembered as a prostitute rather than as the faithful first bearer of the Good News, whom some would elevate to the level of apostle.

Why do we so easily believe this? Part of it is because there are so many Marys mentioned in the New Testament that it is confusing. However, though her prominence in the story of Jesus probably began to deteriorate shortly after her death, the transformation to penitent prostitute was only sealed on Sept. 14, 1591, when Pope Gregory the Great gave a homily in Rome that pronounced that Mary Magdalene, Luke’s unnamed sinner, and Mary of Bethany were, indeed, the same person. And it is easier for a male dominated church to accept a prostitute than a female leader.

We easily forget or ignore the fact that other women, too, played a prominent part in the leadership of the early church. Sadly, as Christianity became more mainstream it also became more patriarchal and the roles of women as disciples, elders and leaders (some even say as apostles) was quickly overlooked or reinterpreted.

We still like to think the worst of women and want them to “keep their place”. Like most women in leadership, I am quite familiar with this. As a young doctor, I was told it was wrong for me as a single woman to earn more than a married man, and I was, on several occasions, refused positions of leadership just because of my gender. Even now, I often feel that when I walk into a gathering of male leaders I may as well be a fly on the wall. I feel as though I have to shout to make myself heard.

The church is often at the forefront of abuse and discrimination towards women. When Sarah Bessey started a Twitter conversation using the hashtag, #ThingsOnlyChristianWomenHear in 2017, it took off in a way few expected and the conversation rippled round social media for months even before the #MeToo movement took root. Women shared stories of rape, abuse, and sexism in the church and how the bible was used to justify these things and keep them quiet. Men blamed women for not submitting to their husbands or leaders or just for wearing provocative clothing. “They deserved to be raped”, some said.

More recently, we all watched the furore in the Southern Baptist church as Beth Moore spoke out about sexism in the church, as well as the often very heated discussions about whether David raped Bathsheba. In his Christianity Today article: Why It Is Easier to Accept David as A Murderer Rather Than A Rapist, Kyle Worley states: “We don’t want David to be a rapist. We actually find it easier to stomach him being a murderer of a man than an abuser of a woman.” This kind of an attitude seems to pervade both the church and our society in so many ways.

Who Are the Women that have Impacted your Life?

Many women have impacted my life. There are those who lived in the past when it was not easy for women to speak out in society – like Elizabeth Fry, the English Quaker who in the early 1800s became well known as a prison reformer and social activist. Another was Daisy Mae Bates, a controversial Irish Australian journalist who made a name for herself in late 19th century Australia as a welfare worker and lifelong student of Australian Aboriginal culture and society. She was known among the native people as ‘Kabbarli’ (grandmother). Still another is Gladys Aylward who became a missionary to China in spite of being rejected by the China Mission Center in London. In October of 1930 she set out from London with her passport, her Bible, her tickets, and two pounds ninepence, to travel to China by the Trans-Siberian Railway, despite the fact that China and the Soviet Union were engaged in an undeclared war. She is best known for her trek across the mountains with 100 Chinese children during the war, a story immortalized in The Inn Of the Sixth Happiness.

Others are women I know today whose lives continue to inspire and encourage me. Like Wangari Maathai, an environmental and political activist who, in 2004, became the first African woman to receive the Nobel Peace Prize for “her contribution to sustainable development, democracy and peace.” Another is Edith Yoder – Executive Director of Bridge of Hope an organization that works to end homelessness by surrounding single parent moms with a church support team.

There is the young woman whose name I don’t even remember who worked alongside me in the refugee camps on the Thai Cambodian border as a Khymer medic. She had little training but her dedication and compassion not only impressed me but saved the life of many of her country men and women. One day she confided in me: “Your being here gives me hope that one day my daughters will have the same kind of freedom that you have.” I have met many others like her around the world who struggle to survive in a world that often abuses, overlooks and discriminates against them. Fortunately, though I may not know their names, I am sure that God never forgets who they are or the good contributions they have made to our world.

Some think that singling out women and their achievements like this is outdated and even obsolete. I suspect they are unaware of how many women still struggle to be treated as equals. The commemoration of a day like this which has fostered massive change, not only for women, but for children, the underprivileged and victims of discrimination still gives hope to those who long for freedom. Its achievements cannot be forgotten or taken for granted. While 60 percent of the world’s poorest are female, 10 million more girls than boys do not attend primary school, and violence against women kills and injures as many women as cancer, International Women’s Day continues to be a relevant and vital encouragement toward liberation.

As you can tell, this is an issue that is very upsetting for me and I pray that you will forgive me. However, I believe that Jesus brings the freedom of equality to all persons and where we see inequality we all need to speak out. As Galatians 3:28 says, There is neither Jew nor Gentile, neither slave nor free, nor is there male and female, for you are all one in Christ Jesus. Biblical scholars have told me that this was one of the creedal texts of the early church, so why do we not believe it? The gender gap is still very obvious not just in our world, but in God’s family.

Watch this video and consider these maternal images of God. (You will find the full text in this post) How do they make you feel? What is your response?

Now prayerfully consider your own response, firstly to Mary Magdalene and Bathsheba, then to women in your life. Are there misconceptions in your views of them? Are there ways in which you discriminate against women by not treating them as equals?

A Contemplative Service for the Third Sunday in Lent

Love this essay. Misrepresenting Mary Magdalene and other women from Biblical times as well as more contemporary serves to silence and diminish and distort the value of women.

I wonder about asking for forgiveness for an issue that upsets you and an issue all women still contend with in 2021. Is the need to frame our frustration, passion for justice and equality in softened tones one more way women suffer under the weight of a masculine oriented world?

A good thought Charlotte. In the past it has been so hard to speak out softly. I think that is changing though. May our daughters also have freedoms that we have not known.