It is 1988, I am leading an adult Bible study in north Phoenix in a church I helped plant a few years earlier. As I am leading the study on the man born blind (John 9), I am realizing how privileged I am to be in this group. Some are very successful businesspeople, some are in professions like nursing and teaching, and still others are new single parents and several struggle with mental health issues. I divide the group into small groups. I invite them to put themselves into the characters in the story. Some are the blind man, some are parents of the blind man, some are the Pharisees and scribes and some are Jesus. After some struggle, each group enters into the character of their assigned personages. A lively debate ensues.

Bringing the Gospel narrative into the context of my class in 1988, I flip the script and say, “The man is not born blind, however, he has just told you he contracted AIDS. How would you react based on your roles you were just in?” Most group members realized that their roles reflected the varied societal responses to recently disclosed AIDS crisis.

Some wanted to question what sin he had committed? Some wanted to blame the man’s parents for failing to be good parents. Some wanted to pull out the rule book on sexual behavior. Some expressed compassion and wanted to see him healed.

Today on May 25, the issue is not AIDS but social injustice. On this date, one year ago, George Floyd suffocated on a street in Minneapolis while a policeman placed his knee on his neck.

Who are we in the narrative?

Are we the policeman who had his knee on George’s neck?

Are we the fellow policemen who are observing and trying to shield your fellow kneeling officer from the prying eyes of the public?

Are we the person with the telephone video camera taping the scene?

Are we one of the by-standers who is shouting at the policemen?

Are we a passer-by who notices the scene and who keeps walking by?

Perhaps at the date of George Floyd’s death, we were in the role we have been set in by our life experience. A year has passed, in what role are we today? Or are we still in a period of transformation?

It was my privilege to wash the feet of one of the homeless men. “Arnold” told me how he and his wife have been homeless a number of times in the past five years. Various circumstances such as lost jobs and lost housing have caused their homelessness. He was grateful for the attention I paid to him and the service offered.

There is something profoundly intimate in washing the feet of another person. The feet are the place where all nerves come to an ending. This is why the ancient practice of reflexology works miracles for many people.

As I was holding Arnold’s feet, I was wondering where his feet had been in his fifty-plus years. What did they play when they were in school playgrounds? What halls of achievement had they strolled through? Where had these feet moved to seeking relief from suffering and pain? As I gently washed, dried and applied lotion on Arnold’s feet, I prayed for his feet. I prayed they would walk in paths of peace, in ways of love and joy, and in streets of service to his family and his community.

As Arnold was grateful for my service; I am even more grateful for the opportunity to minister in the ways of Jesus, who washes our feet every day. 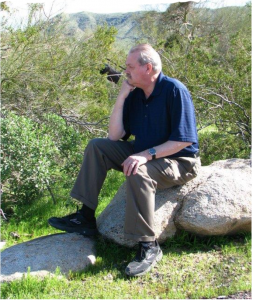 Ron Friesen, a native of British Columbia, Canada, has resided in Phoenix, Arizona since 1981. As an ordained minister with Mennonite Church, USA, Ron has served as a pastor, hospital chaplain, hospice chaplain and a chaplain with people experiencing homelessness. The last twenty-two years, Ron has been a bi-vocational minister while he worked as a professional mental health counselor in a community health center, a psychiatric hospital and a prison. Ron continues to be an adjunct professor at Grand Canyon University. Ron recently became a Certified Spiritual Director through the Christian Formation and Direction Ministry – Arizona.

Ron is married to June Friesen, a frequent contributor to Godspace. They are the parents of two adult sons and the proud grandparents of two girls who live with their parents in northern Virginia. Ron recently took up photography and hiking as a hobby. Ron’s life purpose is “Love God, love those who love God, and love those who don’t know God loves them.”

Register and Pay for this virtual Lenten Retreat Experience with Christine Sine and Lilly Lewin! Join live or download later!

On the Way to Easter… Rebooting Lent

FreerangeFriday: Getting Closer to Jesus this Lent