A Bowl, A Towel, A Nation

Overheated, parched, I beelined for the mini-fridge. The small unit hunkered on the motel floor, humming to itself. Cool water waited within. But the door’s rubbery seal resisted my tug. Impatient, I yanked, and the door rammed my toe, snapping a bone.

Ice, elevation, and time helped the bone reknit, but weird physical aftershocks emerged. Imagine someone dousing your foot with gasoline, then striking a match: searing nerve pain.  Paradoxically icy to the touch, the little piggy that “stayed home” turned blue-black. As if it were dying. The chafe of a sock, the clinch of a shoe, the weight of a sheet draped over my foot—formerly mild sensations overshot 10 on the pain scale. My eventual diagnosis revealed a chronic pain syndrome once common among Civil War soldiers.

Besieged, the nervous system short-circuits. Each time the pain signal misfires, the resulting communications skew the body’s truth. Tissues, nerves, and mind war against one another. The wounded limb, in actuality mended, acts broken as the brain pumps out urgent protests: “Danger! Must Protect!”

Radicalized, reactionary, the extremity behaves as if mortally wounded.

And I felt betrayed by each lie. I wanted to divorce my foot, compel its secession from my body.

I also pored over the scriptures, highlighting upbeat references to feet. Friends, they abound! Yet no verse moves me more than the passage in John where Jesus, basin in hand, towel girding his waist, washes then dries the feet of his friends.

I don’t know where you stand on the January 6th siege at the US capitol. But I believe many of us who follow Jesus lament the incendiary, ever-widening rift dividing His followers. Will we, by our actions and rhetoric, secede from our precious unity achieved at the cost of His life?

Do we presume faith’s power and effectiveness depend on a majority consensus?

Is the Lord of Lords now so impotent that revolutionaries must save the day?

It’s all too tempting to speak and to act based on fear, rage, a desire for payback. Flaming, unchecked resolve is a steel-toed boot etching fresh battle lines in the common dust. Within our churches. Within our own families.

Rather than being reactionary, tempted to extremes as my sickened body once was, please, let us instead be responsive. Let us be conformed, by grace, to our Savior’s example. The bowl and towel await us. Along with the living water. 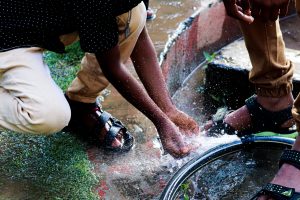 by Syed Ali on Unsplash

In these perilous days leading up to the inauguration, and beyond, may we, as the cherished body of Christ on earth—His hands and feet—first seek the cleansing, healing touch of God. Then, seeking a more perfect union with one another, may we freshly embody our love for Jesus, who prepared for the ultimate confrontation by washing the feet of those around him—including the one who betrayed him.

“Hasten the day when Thy presence and the strong hand of Thy purpose shall be found not only in the hearts of a few wise and brave . . . but throughout the broad land, in court and council-chamber, in workshop and market-place, in the city and in the fields. And whatever I myself can do, give me grace this day to begin; through Jesus Christ. Amen.”

Check out Guidelines for a Personal Retreat available now as a download for only $4.99! 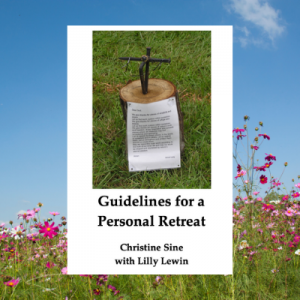 Meditation Monday – Why Don’t We Follow Joseph, Mary and Jesus Into Egypt?