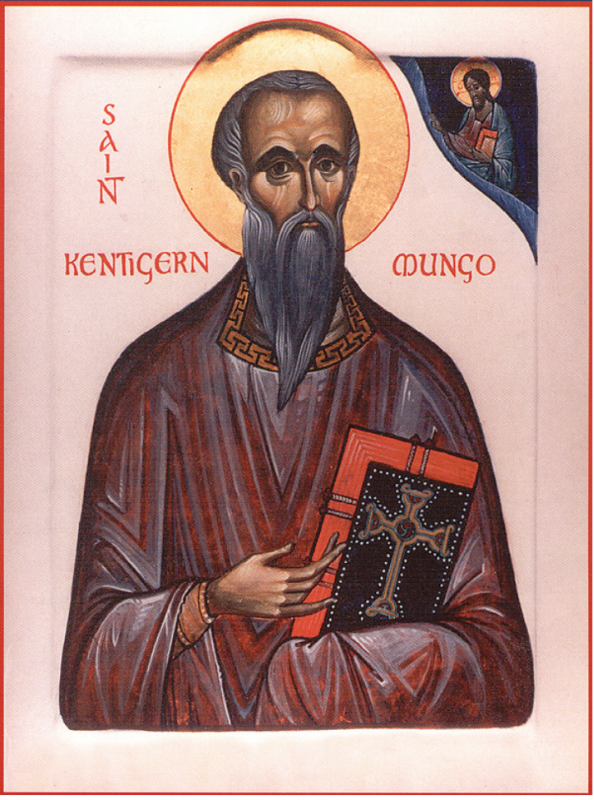 Many preachers and scholars, C.S. Lewis amongst them, have said, “The Bible is true but not always factual” and it is similar with the tales of the Celtic Saints. Their biographies were written many years after they had died, and were to show a truth rather than to be factual accurate. As I researched St Kentigern, and read about his miracles, and journeys, I asked myself: what does this Saint Kentigern have to teach us today?

He was born in Scotland, was said to have established Glasgow as a religious centre. The four symbols of his main miracles are on the coat of arms for Glasgow; a bird, a tree, a bell and a fish. But when persecution of Christians came to Strathclyde, he move to Wales. Even though Kentigern had been a leader of a religious community, he was content to come under St David’s leadership and learn from him. Whilst in North Wales, he set up a monastery which, according to Jocelyn of Furness, who wrote Kentigern’s biography in about 1185, he did it because he believed the scattered Welsh monks needed a place to gather for education and to support each other. When he went back to Scotland, he left it under the care of Asaph. The monastery and the subsequently town that grew up around the monastery, are called “Llanelwy” in Welsh, meaning church by the river Elwy, but are better known by their English name of St Asaph. It is only the hospice on the edge of the town, opened in 1995, which bears Kentigern’s name. He also established churches through Northern England.

For me, the three key areas that stood out are (1) he was not constrained by nationalistic or ethnic boundaries; (2) he was not afraid to learn from others; and (3) he did not need to be recognised for his achievements.

In the UK, we have just left the EU. Also, as one watches the TV reports on the Covid-19 pandemic, one can see how divided the principalities of England, Wales, Scotland and Ireland are. In Europe and America, we see issues of politics and immigration dividing countries. And that immigrants are fleeing their countries because of ethnic and political issues. The world appears to be dividing up along stronger and stronger nationalist and ethnic boundaries. This, in turn, leads people to become more and more afraid to learn from people who are not “of their tribe”, which is as true for some Christian denominations as it is for the secular world. At least, following on from the Black Lives Matters protests, more of us are reading books written by people with lives and experiences that are diverse to our own.

The third point I noticed was how St Kentigern did not need recognition for his achievements. I know this is something I struggle with. There are a few people that I have befriended and encouraged, who have gone on to do amazing things and have forgotten that I supported them when they were new to an area or needed a leg up. I have struggled with that but am learning to let it go by asking myself why I need that recognition. Somehow we need to all let go of the need to be recognised. I’m sure we can quote the verses about praise in heaven, etc, but can we live them?

So how do we let go of our ties to our nationalistic, political and ethnic boundaries? How do we make ourselves willing to learn from others who are different to us? And how do we let go of needing to be recognised? I think it is by letting go of fear. From the things I have read about St Kentigern and many of the other Celtic saints, is that they had a holistic faith so did not need to be bounded by identity, being known for their knowledge or their achievements. Kentigern trusted in God, talked and listened to God, and fully accepted that his reward would come in heaven. He had nothing to fear because he knew he was doing what God had called him to. His miracles all show his care for the natural world and for his fellow humans.

To follow Kentigern’s example, we need to let go of our fears of needing others to know what we’ve done and what we know, and be content to learn from whoever God places in our path. We need to do the things God shows us we are to do but then hold them lightly and let go when told. And we need to be content and secure in who we are and our relationship with God.

“The only thing that stands between us and the awesome energy of love [God] is fear. To live without fear, we must stop analysing it, stop agonising over it, stop fighting with it, and let it go.”

The story of St Kentigern, as with many of the Celtic saints, shows a life lived without fear and lived out filled the awesome energy of God. This is the lesson this saint can give us today.

Register for this free webinar and join us tomorrow on January 14, 2021 as we look to discern our way in the new year together. Even if you cannot attend the live session, please register so we can email you the link to the recording. Click on the image below to register. 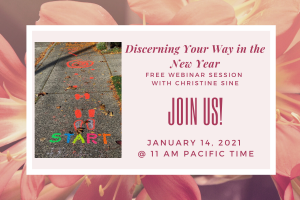 A Litany of Healing for A Time of COVID