Getting Ready for a New Year with St John

Do you have a favourite book? One you return to time and time again? And what about your favourite book in the Bible? For me the answer has to be the Gospel of John with its wonderful themes of light and truth. In the last verses it says: I am that disciple who witnessed these things!  I recorded these events here so we know that they are accurate. I suppose that if all the events in Jesus life were written the whole world could hardly contain all the books. (John 21: 24-25, New Living Bible paraphrase).

Although I love many parts of the other gospels, John’s gospel remains a favourite of mine as it seems so permeated by love. I have recently enjoyed watching it on YouTube where it is brought to life on film with the actors using the actual words from the Bible and seeing it portrayed  visually has given me a different perspective on it which set me thinking about the author who is credited with being the inspiration behind the gospel that bears his name, whether he wrote it in person or not.

As far as we can tell from church history John was one of the most influential figures in the early church. According to church tradition he was the beloved disciple mentioned in John’s gospel.  Along with Andrew he was the other follower of John the Baptist who was invited by Jesus into his home at the beginning of the gospel & with his brother James he left their father Zebedee’s fishing business to answer the call of Jesus. (Jesus’ nickname for these two firebrands was ‘Sons of Thunder’.). It was John who leaned close to Jesus at the last supper and it was to him that Jesus entrusted the care of his mother, Mary as he died on the Cross. 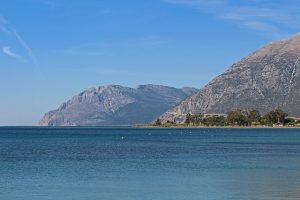 In later life, John became Bishop of Ephesus and is credited with writing the book of Revelation. Under the rule of the Emperor Domitian who persecuted the Christians, John was banished to the Greek island, Patmos where many were sent to work as slave labour in the mines.  Prisoners who were too old to work were left to roam around foraging for their food or face starvation and it would have been difficult to communicate with one another in this kind of isolation, confined to a particular area and not allowed to leave.

As we come towards the end of a year that seems to have been dominated by lockdown and all kinds of diminishing restrictions I thought of John towards the end of his life living on this small island, cut off from friends & fellow Christians, wondering how he could continue his ministry in exile. The following imaginative reflection describes how he might have felt.

I never imagined I’d stay here so long on the island – or that I’d live for such a length of time. I always thought I’d end my days like James, or Paul, or Peter, martyrs to the cause. And yet, I’m happy here. Content with my lot, you might say.

I know every stone, every blade of grass, here on Patmos, each tree and bush but I’m never bored. The ever-changing sky, the sea in all its different moods, the ethereal morning mist, and the glorious quality of evening light still captivate me as they did the first day I was sent here, so many years ago.

I’ve heard the Angel speaking, telling me what to write to the Churches, sharing my Revelations with those who have ears to hear – words of comfort to encourage them, and words of condemnation, berating them for their infidelity (not for nothing were my brother and I nicknamed ‘Sons of Thunder’ in our youth).

I’ve had plenty of time to recall my life. So many emperors and earth-shattering events: towns swallowed by mountains of erupting ash; the holy city of Jerusalem raised to the ground, the Temple sacked, just as Jesus predicted.

Above all, I’ve had the space to reflect on Him, my beloved friend, teacher and Lord; to write down some of our adventures together with God, when I learned in my teens to look at life in new ways.

It is easier now since the lad came– my namesake, scribe and companion. I ramble on; he puts it in order and writes it all down. But every story needs a good end and an even better beginning. Here, lad, sharpen your stylus and we’ll make a start:

FreerangeFriday: Lessons of the Amaryllis