Growing up in a household with a Scottish father, we never forgot St Andrew’s Day! Not just because he happens to be the patron saint of Scotland (among other places) but also because Andrew is such a likeable character among the disciples of Jesus.

Andrew is mentioned only 12 times in the gospels but a number of them are on key occasions. In the synoptic gospels, apart from appearing in the list of disciples, he is one of those called by Jesus at the lakeside; he is present when Jesus goes to Peter’s house (the house Andrew shares with his brother); and he is one of the four disciples who question Jesus about the destruction of the Temple. My favourite stories of Andrew though are all recorded in John’s gospel and all involve introducing people to Jesus – it is to Andrew that Philip goes when some Greeks turn up wanting to meet Jesus and it is Andrew who facilitates it; it is Andrew who brings the small boy with the loaves & fishes to Jesus at the feeding of the 5,000. 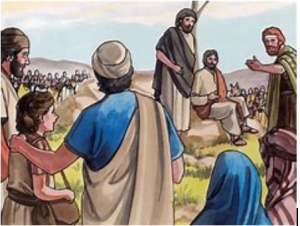 Perhaps my favourite story of all is in the first chapter of John when Andrew and his unnamed friend (who are disciples of John the Baptist at the time) leave John to tag along behind Jesus and end up being invited to join him for the day. (John 1 v 35-42)

Andrew was a young man living in difficult times. He came from Bethsaida which was in the area ruled by Philip, son of Herod the Great (& brother to Herod Antipas). Philip was a hedonistic head of state who loved all things Roman and who cared neither for God nor for the people and society where he was tetrarch so the area he ruled was more secular than other places in Palestine at the time and the ancient values of respecting God and caring for your neighbour had all but disappeared.

Many devout Jews at that time were hoping & praying, expecting God’s Messiah to come and overcome the foreign oppressors in the manner that King David had destroyed the nations who had overpowered God’s chosen people, the Israelites. So it is little wonder that many of the young people in particular were hoping and praying for a new way of living.

When John the Baptist points out Jesus to his two disciples as the person they might be looking for, they wanted to know more and started following Jesus at a distance. So Jesus turned round and asked them a question, ‘What are you looking for?’ or ‘What do you want me to do for you?’. I often wonder if they were able to answer Jesus’ question by the end of the day. It seems so, partially at least, because Jesus must have made such an impact on Andrew that after spending time with him, the first thing Andrew did was to rush home and tell his brother, Simon that he had met God’s promised Messiah and he took Simon to meet Jesus at the earliest opportunity.

It’s a good question to ask ourselves from time to time – What am I really looking for in life? Not an easy question to answer but a good one to ponder especially in these difficult times. So how will you celebrate St Andrew’s Day this year? I hope that with God’s grace I can find new ways to bring people to Jesus during Advent, whether we are in lockdown or not.

As one of my favourite hymns by Graham Kendrick says: One shall tell another and he shall tell his friend…

FreerangeFriday: Lighting the Candle of Hope

St. Francis: Then and Now