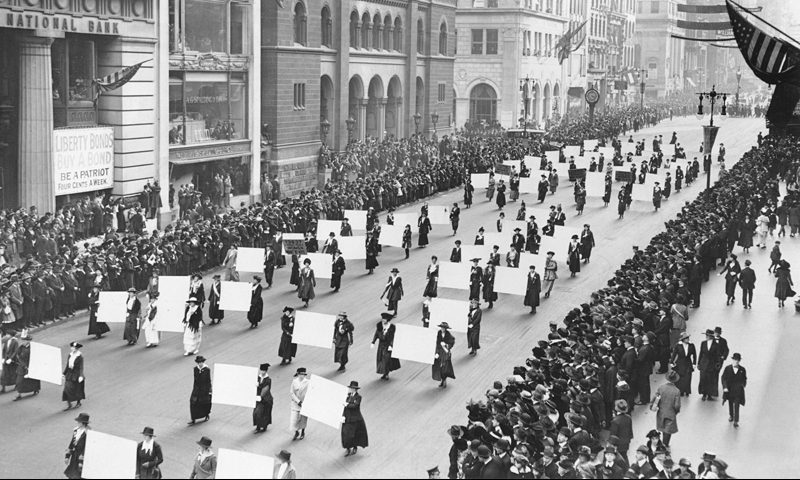 The photo above by an unknown author shows a Women’s suffragists parade in New York City in 1917, carrying placards with the signatures of more than a million women. Today, August 26, 2020, we celebrate the 100th year of Women’s Right to Vote in the United States! Because of the activism and sacrifice of so many women, we can exercise this right for every election and celebrate Women’s Equality Day each year.

History.com points out the reality for women before the 19th Amendment was ratified:

During America’s early history, women were denied some of the basic rights enjoyed by male citizens. For example, married women couldn’t own property and had no legal claim to any money they might earn, and no female had the right to vote. Women were expected to focus on housework and motherhood, not politics.” 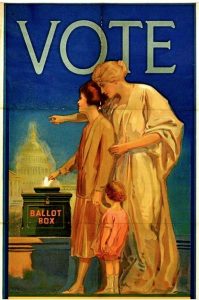 But on August 26, 1920, the 19th Amendment was certified by the US Secretary of State to now read:

The right of citizens of the United States to vote shall not be denied or abridged by the United States or by any state on account of sex. Congress shall have power to enforce this article by appropriate legislation.”

In an interview with Edna Mae Bucknam, a suffragist born in 1907, she shared:

How did the right to vote change your life?

I was 11 when the right to vote came out. It changed me to the extent that I more or less did what I intended to do. I wasn’t like a lot of people who did a lot of talking and not a lot of doing. The right to vote gave me the ability to look at things in a different way and it also gave me an opportunity to do a lot of things that made my life different.”

Since 2020 is an election year, I think it’s pretty neat that we can celebrate this right, a right that was fought for by the women who came before us. Today, I want to honor their amazing courage and efforts that have greatly impacted the world that I get to live in.

Resources to Check Out

Wonder in the Trauma Healing Process

We Carry Resurrection in our Mouths

We Are Our Foremothers’ Wildest Dream

Hearts are Grieving – Bring Back Our Girls

Loved reading this today. Celebrating with you!