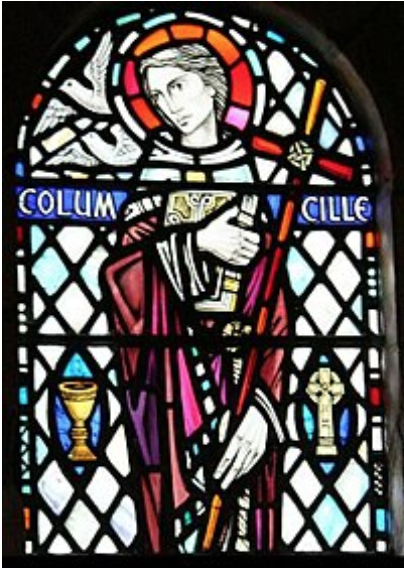 When I was young we had a large red leather bound book on our bookshelf. It had very few illustrations and all of them were weird pencil drawings which made a great impression on me as a child. It was a book of folk tales from around the world and I remember my mother reading me a strange tale from the ancient annals of Ireland which went something like this.

‘The hordes gathered on the battlefield and facing the enemy the Prince realised that they were far outnumbered.  But right was on his side.  No-one would take this away from him despite the strict instructions from the High King that no battles would take place while he ruled.  Choosing to ignore his overlord the Prince attacked and the carnage that ensued was terrible. with many losses on both sides.  Afterwards came the reckoning.  Summoned by the High King the Prince knelt before the throne to hear the judgement. ‘You are banished never to return to these lands in your lifetime on pain of death.  You will be cast adrift to wander the seas as a homeless felon until you find a land that will accept you.  Go, and may the Lord God have mercy on your soul.’

The Prince and his small band of followers made ready and set off with few possessions.  As he looked back at his country receding into the distance the Prince wondered what the future held.  His life was in the hands of God.’  The first place they landed was inhospitable without enough resources to support life.  In other places they were chased away by suspicious locals.  The Prince and his companions found themselves on the turbulent sea once more. At a loss he cried out to the elements ‘Give us sanctuary, we pray’  That night in a dream he found himself kneeling before another throne – bowing low before the High King of Heaven who commanded him ‘Go, and set up my kingdom in the place I will show you. Speak to the heathen in my name and share my love with all the world. [from The legend of St Columba]”

This rather fanciful story of the early years of St Columba does include a few elements of truth. Columba was of high birth and did slaughter a number of people in a battle. What it doesn’t say is that he was already in holy orders and his ‘enemy’ was a fellow cleric with whom he had quarrelled over possession of a manuscript of the Gospels! Not an auspicious start for sainthood. Whatever the real truth, as we know Columba finally landed on the small Isle of Iona off the west coast of Scotland and following the instructions he had received from God, began setting up a new kingdom dedicated to God and the rest as they say, is history. He had a great influence on converting the Picts and the holy place he founded on Iona changed the history of Scotland and stretched even as far as Northumbria in the 7th century with the coming of Aidan at the request of King Oswald who had been educated at the abbey of Iona.

But what have these far off stories to say to us today in the 21st century? Andy Raine from the Northumbria Community in his article ‘A space has been cleared’ has this to say about St Columba and his influence today.

‘Columba came to Iona a very broken man. He had a back story. Most people have. It was a significant place which also had a back story of its own.  It was a primeval place prepared before our time began. And Columba’s brokenness was a useful corrective to his unflappable self-confidence. He became less concerned with being right, more given to being open and could more easily access a depth of compassion. Columba and Iona were about to collide and a whole lot of healing would go on, and a whole lot of loving would emerge to surround the world. Columba’s voice had a distinctive sound and it could be heard distantly from far away.  He sang from a heart that had been broken. He had learned to embrace the place of exile and discreetly to whisper ‘You are altogether beautiful, O you of my heart’ and the sound is still echoing.’

In our times of isolation and exile may we still hear echoes of his voice, praising God across the ages, and may God give us the courage to join in the song of love until it resonates across our world in our time.

The hymn ‘O God thou art the Father’ is attributed to St Columba and is set to the old Irish tune Durrow: 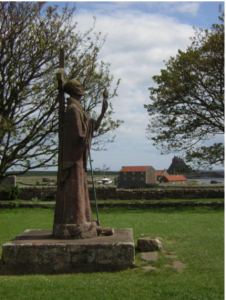 I am fortunate to live near the beautiful Holy Island of Lindisfarne which I visit regularly (when we are not in lockdown). I have written a few Holy Island hymns & the hymn below was written after my first (& only) visit to Iona but it works well on Holy Island too. I chose the tune St Columba. I hope you enjoy singing it on St Columba’s Day.

1 We draw apart from busy life

to set aside some space

and see afresh with open eyes

the beauty of this place.

2 We glimpse each separate grain of sand,

gold glistening on the shore,

and hear the haunting seagulls’ cry

above the breakers’ roar.

3 Each quivering blade of grass reveals

the glory of God’s earth;

4 We join with all creation’s choir

and sing of God’s domain,

the love of Christ in empty hearts

5 Refreshed in body, mind and soul

we return to daily round,

our eyes and ears attuned to God,

to serve with love new found.

Meditation Monday – How Do We Respond?

Finding Serenity and Health During a Pandemic