I live in New Zealand, home of Hobbits, Zealong Tea Estate, and Jacinda the Magnificent. I started today (Day 7 of Level 2 Coronavirus Lockdown, the date of which I would write 21/05/20), with a cuppa.

In most of the English speaking world “cuppa” refers to having a cup of tea. It doesn’t need anything with it, but a biscuit would be appropriate. Again, in most of the English speaking world, a “biscuit” means a sweet, flat, often hard, unleavened piece of baking. Other parts of the world might call it a cookie. It’s not a scone. A cuppa and a biscuit is acceptable fare at any social interaction from smoko on a construction site to its precocious offspring – high tea. Which would have a scone. And cream, with jam.*

The quality, style and manner of use – or not – of cup, saucer and plate may vary wildly when having a cuppa, as may the tea itself – black, white, weak, strong, tea or tisane, leaves or bag – but the basic elements remain the same: tea and biscuit. Regardless of age, gender, background, social status, ethnicity, sexual orientation, faith, ability or lack of it; white collar, blue collar, dog-collar, no collar, a cuppa and a biscuit is your basic currency of community and connection where I live.*

If we ever needed more of anything in our world at the moment its community and connection. Johann Hari (Lost Connections) reckons the diminishing of both is the major cause of the tsunami of anxiety and depression that has swept over our world recently. I think he’s right.

A few years ago the people at the United Nations – no doubt over a cuppa, although the title would suggest something stronger – decided today would be the World Day for Cultural Diversity for Dialogue and Development. If they’d talked to Johann Hari we might have had the World Day for Cultural Connections for Dialogue and Development.

There’s nothing difficult about overcoming racism and bigotry, you just have to listen to someone who’s different to you (colour, faith, sexual orientation, gender, background, or education) tell you their story. With the emphasis on “listen” and “their”. Actually that is very difficult for most of us to do. In fact it’s pretty much impossible. Unless of course you are committed to following Jesus and letting his agenda become yours. And this only works because of who Jesus is: part of the trinitarian relationship that is the Christian God. His ascension from earth back into that heavenly kingdom means Jesus is God, God is accessible to us, and that God stands for us. This is especially true when we are doing our best to listen to the stories of others so we can be changed more and more into the likeness of Christ, who said that every person is made in the image of God. Every person. Every person.

Today is also the day we particularly remember the ascension of Jesus from earth to the heavens. That’s worth sitting down with a cuppa and a biscuit and thinking about as well. 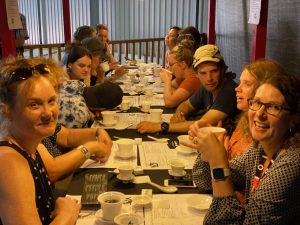 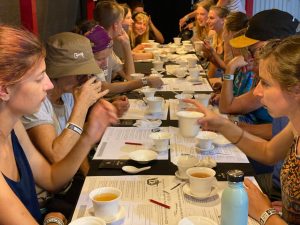 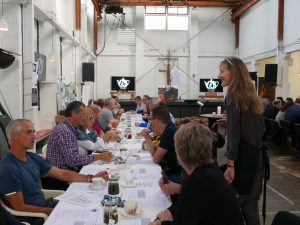 Last year I served more than 1300 people cups of tea. Mostly at festivals and conferences, but also in churches and homes in NZ, Australia and the USA. I have a slightly formalised (some people would spell that with a zed or even a zee) way of doing it that involves telling some of the story of tea, and the customs associated with its drinking. Then I introduce people to some of the best teas in the world (Zealong Tea Estate) that happen to be grown in New Zealand, and we share cuppas and conversation for 45 minutes. I call it “Tea & Be”. It’s my response to the Ascension and the UN and Johann Hari.

Today is also International Tea Day. Those bureaucrats at the United Nations really like their tea. When I discovered there was no patron saint of tea drinkers (the Vatican prefers caffe crema) I anointed one and Francis Xavier of Goa became the patron saint of the International Guild of Tea Liturgists set up by a few friends who use tea in deliberate ways to bring people together, over a cuppa. 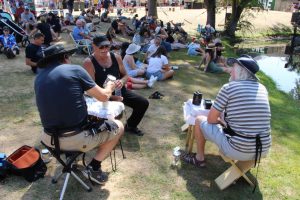 So today is a triple whammy offering me opportunity to think about making connections, having conversations, my prejudices, the flourishing and wholeness Jesus has made possible for me when I follow him, and to do that over a cup of tea – grown sustainably, harvested justly and traded fairly (as all Zealong teas are), perhaps even in conversation with someone who lives differently to me.

*How did you feel reading words and numerals that may have been used in a different way to what you are used to? Was your tendency to try to understand, skip over them, or not read this far!

Mark Pierson is a husband to one wife, father to four adult children, grandfather to four, and a pastor, writer (The Prodigal Project, The Art of Curating Worship: reshaping the role of worship leader), speaker, occasional blogger at markpierson.org.nz, curator of liminal spaces in public and church spaces, and tea drinker. You can connect with him or invite him to a virtual cup of tea here.

Beautiful post with such warmth oozing out of every paragraph. Thanks for the lighthearted upliftment.

I love the community gathering and think we should do this in our street. Community is not a word we use in our ‘suburbs’ but maybe we could start to ‘embrace’ this more! Thank you 🙏

Sophia and Vicki, Thank you for reading. Vicki, I assume that your reference to having a go at something in your suburb isn’t a reference to the Ascension! That would make a very cool street party – watching your neighbours ascend into the clouds! Definitely worth a go – as long as social distancing is being observed.