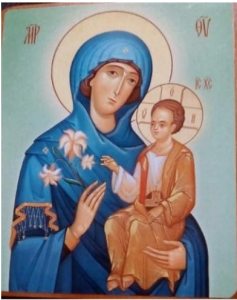 photo of icon given to me by a friend

Recently, this Beatles’ song has been rattling round in my head and it seems as if the words still have as much resonance for today as when it was released in 1970. Paul McCartney said that the Mary in the song referred to his mother (whose name was Mary) yet many people apply it to another Mary – the mother of Jesus. As non-conformists we didn’t often mention Jesus’ mother in church when I was growing up apart from her leading role in the Nativity narratives but as I got older I realised that there was a lot more to her than that.

My Roman Catholic friend has a wonderful robust relationship with Mary. One day, years ago, when our teenage children were driving us mad she said to me ‘Well, I’m off for a word with Mary’. Do you want to join me? Thinking she was going to church to pray I explained that in my tradition we didn’t pray to Mary. She laughed and said ‘No, I’m off for a bit of peace in the Convent garden where I sit beside her statue and say to her ‘My lad is driving me nuts as I’m sure yours did too on occasions’ and it’s wonderful to get it off your chest.’

The incident she was thinking of is recorded in Mark 3 :20-21 & 31-35 where Mary, along with Jesus’ brothers, went to try and dissuade him from antagonising the authorities but to no avail, as the crucifixion demonstrates. It is intriguing therefore to discover that after the resurrection we find Mary is mentioned on a number of occasions in the Gospels, and in Acts1 v14 she is described as being at prayer among Jesus’ followers in the Upper Room, with Jesus’ brothers.

At this limbo time between Easter and Pentecost it has been good to reflect on the different accounts of where Jesus’ mother is mentioned in the gospels – one of my favourite readings is from John’s gospel where Jesus on the Cross commends his mother into the care of one of his closest disciples.

25 Standing close to Jesus’ cross were his mother, his mother’s sister, Mary the wife of Clopas, and Mary Magdalene. 26 Jesus saw his mother and the disciple he loved standing there; so he said to his mother, “He is your son.” 27 Then he said to the disciple, “She is your mother.” From that time the disciple took her to live in his home. (John 19 v 25-27)

In our difficult times it is good to remember that Jesus shows the same loving compassion for each one of us even when we feel as if we are all on our own. Maybe it’s time to widen our horizons and allow our loving heavenly Father God to ‘mother’ us in our times of trouble and think of ways we can be like a mother to others.

Some years ago, I wrote a poem imagining Mary at the cross.

The Mother ‘Jesus saw his mother, with the disciple whom he loved standing beside her.’ [John 19: 26]

She looked at him
and saw that he was dying,
and rebelled against
the futility of it all.

Already he seemed
so far away from her,
like a stranger, almost.

She had known him
little more than
thirty years, such
a short time really
in the eons of eternity.

The emptiness which filled
her heart was replaced
by a kind of horror
as she looked at him –
a shadow of his former self –
his bleeding, sweating body
racked with pain; it was
revolting, repellent,
disgusting.

Where was the glory
and majesty of Death
which people talked about?

She shut her eyes
to try and efface the agony
of it all……. and saw
the stable and the blood
upon the straw, recalled
the stench of sweat
and warm animals –
felt their hot breath and the pain
of the child fighting
its way out of her womb,
from the darkness
into Light!

Looking up, she caught his eye
and, meeting his tranquil gaze,
understood he knew that they
had travailed this journey before.
The ghastly gore of death
was no different to that of birth.
The glory came afterwards…..

‘It is accomplished!’ he cried to the world;
and she smiled, through the mists of her tears. © Carol Dixon

In these uncertain times when we seem to be surrounded by death, may we get a glimpse of the resurrection hope that is found in our Loving brother Jesus, who cares for each of us as deeply as he cared for his mother Mary.