I recently came across a photograph of a large stone carved with the words, “Abandon all hope,” alluding to Dante’s Inferno and its warning outside the entrance to hell, “Abandon all hope, ye who enter here.” Throughout The Inferno, God is never mentioned directly, because hell is so absent of God that even the word itself cannot be spoken. That’s almost the definition of hell in The Inferno, a place where God is absolutely missing. It occurs to me now, though, as I think about that carving and its warning, that hell is also the place where hope is entirely missing.

Over the years of my long life, I have occasionally felt nearly hopeless, though I’ve always been able to cling to something, at least a hope for hope. And something or someone has always come through for me. I am able to live in hope because I have experienced so much kindness.

Living in the midst of a pandemic as we are now, it’s easy to forget kindness, to surrender to panic, even despair, instead. Every morning when I wake up, the death toll has risen by thousands. How could something so small and invisible as a virus have such power? How could experts not know when this will all end as they warn us to prepare for another wave? I think about our ancestors who experienced the plague, who didn’t know anything about transmission by fleas, who only knew when they spotted a black lump like a tumor in their armpit that they would be dead by nightfall. The other day when I felt hot and clammy, I took my temperature, and when I felt a scratchiness in my throat, I wondered if it was the beginning of something really bad. We’re right to fear the corona virus, to fear it enough to respect its power, to protect our neighbors from our potential contagion even when we feel fine. How ironic that this virus accelerated so furiously just as we were preparing to celebrate the greatest feast of the Christian year. Just as we prepared to greet each other with renewed life, we needed to consider our own potential as agents of death.

We are all heirs of people who survived the Black Death that overwhelmed much of Europe during the 14th century, or of the smallpox and measles epidemics that infected indigenous peoples of the Americas during the 16th century and later, or of similar diseases that have historically spread across every inhabited continent. In our lifetimes, we’ve witnessed millions of people die of AIDS and thousands of Ebola. And yet we have not abandoned hope. We have trusted physicians and scientists to discover causes, treatments, and cures; we’ve donated our resources and changed our behaviors to help o

ther people, many of them absolute strangers, survive.

During the spring of 2020 and maybe for quite a while longer, isolating ourselves is becoming an act of kindness for hundreds of others we may never even meet. It’s an act, not of panic but of hope. When I walk around my neighborhood, I see how many people have decorated their windows with hearts. I read story after story about people sewing and donating masks. I watched Joseph’s Amazing Technicolor Dreamcoat and Jesus Christ Superstar that Andrew Lloyd Webber made freely available to all of us. I see photographs of children waving through the windows of their grandparents’ nursing homes. We’ll get through this. We’ll be together again. I hope we’ll be able to maintain the concern we’ve felt for each other once we feel secure and ordinary again. I believe we can. 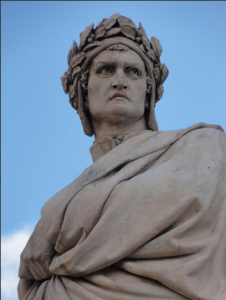 If you’ve never read The Inferno, I encourage you to take a look. It ends with the word “stars,” as do all three sections of Dante’s Divine Comedy. Stars, those mysterious beckoning points of light that remind us how vast the universe is. And we’re part of it, all of the darkness and all of the light. The Inferno ends with stars, but it doesn’t really end even there, for it continues through The Purgatorio to The Paradiso, where it really ends, where we will all end, in paradise with stars.

Hope for a Tree

The River That Runs From the Throne

I Believe in the Resurrection

Thanks for your message of hope.

Hope is always on the horizon but we need the eyes and heart to see and feel it !