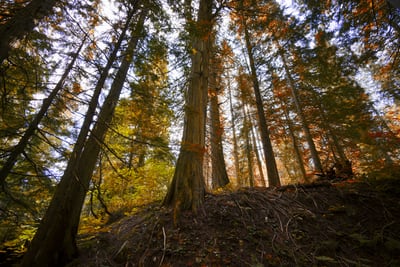 I was 15 the first time nature spoke to me. We had lived in southern Virginia while I was in junior high school. My dad was stationed at Langley Air Force Base, and right before I turned 15 my dad retired from the air force. My parents decided we would move to the West Coast.

We traveled by way of Toronto, Michigan, Missouri, Texas, Colorado, and California, pulling a 14 foot trailer behind our Dodge. We visited grandmothers, cousins, aunts and uncles, and family friends. The trip was agony for me. I was mourning the loss of my friends and my life in Virginia, and as a teenager I really did not enjoy six weeks of close intimacy with my family, while driving 8,000 miles.

We arrived in Tacoma, Washington, at the beginning of August and immediately found a wonderful house, where my mother still lives. The owners weren’t able to move out until early September, so we needed a place to stay for a month. The owners offered us their summer cabin on Puget Sound, just north of Gig Harbor.

The cabin looked east onto Puget Sound. To the left was Vashon Island. To the right was Point Defiance in Tacoma. Between these two promontories, Mount Rainier rose up over the waters of Puget Sound, perfectly framed by the two wooded hillsides. 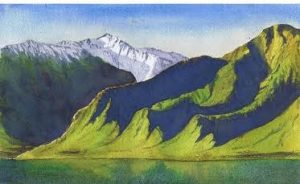 August that year was clear and sunny every day. Throughout each day, we watched the light on Mount Rainier change. In the morning the mountain was backlit by the rising sun, looking mysterious and other worldly. At midday, the mountain was illuminated from above, with the sun slightly to the right, reflecting off the glaciers. In the afternoon, the mountain was vivid, clear and gorgeous in the full light of the sun. At sunset, the magical rose and peach of sunset painted color on the mountain.

The summer had been so hard for me, and Mount Rainier spoke to me. It said, “There’s more.” There’s more than everyday life, there’s more than struggle and sadness. There’s something beautiful beyond this life.

“The whole world is singing but we’ve stopped listening.” Those words show up in a video of a beautiful sound and light exhibition at the United Nations about species loss a friend sent to me in response to some of my writing about listening.

A few years ago I interviewed dozens of people about listening in Christian ministry and mission, and that research resulted in a book, but only recently have I connected listening to humans with listening to creation.

The notion of creation speaking is present in one of my favorite scriptures about creation, Psalm 19:1-4:

The heavens are telling the glory of God;
and the firmament proclaims his handiwork.
Day to day pours forth speech,
and night to night declares knowledge.
There is no speech, nor are there words;
their voice is not heard;
yet their voice goes out through all the earth,
and their words to the end of the world.

What are the heavens saying? If we listened to the animals and plants of the earth, what would they say? Or the mountains, rivers, fields, forests and seas? Or even the bacteria, viruses and other microscopic beings?

Pope Francis, in his recent encyclical about stewardship of creation entitled “On Care for our Common Home,” included a poem with the words, “The poor and the Earth are crying out.” If they are crying out, are we listening? Do the poor and the earth sometimes cry out with the same message?

If God made something, does that imply we are responsible to care for it? I believe the answer is a strong yes, and that Christians need to spend more energy exploring what that looks like in practice.

A hearts’ beat; a Poem

Strengthening Family Bonds in a Time of Social Distancing

Wonderful reflection. Perhaps in this time of isolation, we will learn to listen more closely.

Thank you Lynne…your words resonate with me. Being on “imposed isolation” up here in the Warm Beach senior community, we are to keep our “distance,” but we can still go out and walk.Seeing Puget Sound,or catching a glimpse of the snow geese, trumeter swans and eagles flying in the blue sky is such a blessing. The solitude and quietness is a time of reflection and prayer. The Novena is wonderful during these days isn’t it?