Do You Feel Like You are in A Storm? 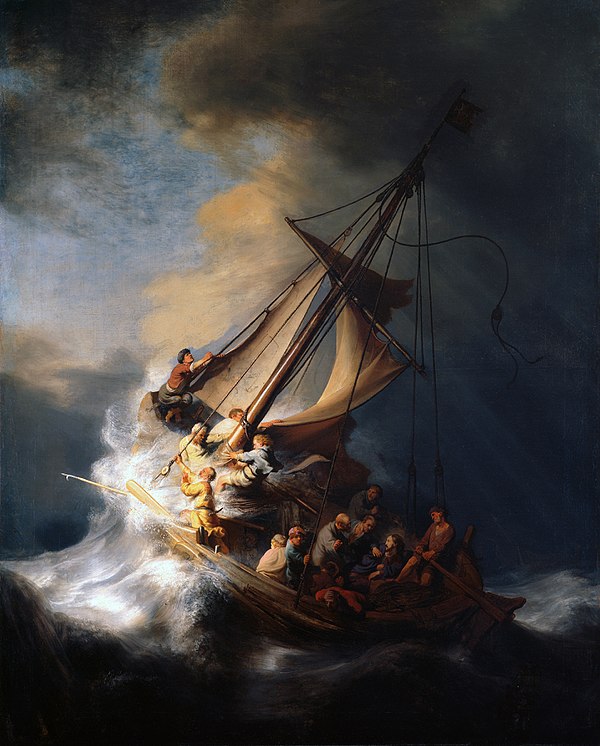 Do you feel as though you are living in the midst of a storm? COVID-19 spreading rapidly across the globe. Stock markets crashing as people panic in response. Grocery shelves empty of toilet paper and cleaning supplies. It feels as though a tornado has struck and there is Jesus sleeping peacefully in the back of the boat.

Later that day, after it grew dark, Jesus said to his disciples, “Let’s cross over to the other side of the lake.” After they had sent the crowd away, they shoved off from shore with him, as he had been teaching from the boat,[a] and there were other boats that sailed with them. Suddenly, as they were crossing the lake, a ferocious tempest arose, with violent winds and waves that were crashing into the boat until it was all but swamped. But Jesus was calmly sleeping in the stern, resting on a cushion. So they shook him awake, saying, “Teacher, don’t you even care that we are all about to die!” Fully awake, he rebuked the storm and shouted to the sea, “Hush! Calm down!” All at once the wind stopped howling and the water became perfectly calm.Then he turned to his disciples and said to them, “Why are you so afraid? Haven’t you learned to trust yet?” But they were overwhelmed with fear and awe and said to one another, “Who is this man who has such authority that even the wind and waves obey him?”

This morning as I read through the story of Jesus calming the storm in Mark 4:35-41 something struck me that I had never thought much about before – Jesus was actually deeply asleep in the midst of this storm. Now I lived on a ship for 12 years and I know that it is hard to sleep in the midst of a storm when the ship is rocking and rolling, the waves are crashing and the cargo groans against its bonds threatening to break loose at any moment. We need everyone to help keep the ship on an even keel.

Even now when I live in a stationary home, I know how anxiety can keep me awake, often creating its own storms of fretting, fear and anxiety.

Sleeping in the midst of storms is a sign of extreme stupidity or of supreme confidence.

Jesus’ response when the disciples woke him shows that his sleep was one of confidence. He trusted completely that the God who formed the waters and allowed the storms, the God who called him beloved Son, was still in control and would keep them all safe no matter how violently the waters raged. In the midst of the storm, he was able to find rest and refreshment.

Sometimes I think that we forget that Jesus is in the boat with us.

Sometimes I not sure that we really want to wake him. The storm itself is frightening, Jesus calming of the storm is terrifying.

We are in the midst of stormy times. None of us know what the future holds. We are anxious about losing our jobs and homes. We are not sure if we will have health insurance to cover us if we get ill.

How much confidence do we have that Jesus is in the boat with us? And what would it look like for him to calm this storm? It is so easy for us to pray for the solution we want to see happen. That COVID-19 would disappear quickly. That there will not be another recession as a result of the economic downturn. That those we love will not get sick.  It is hard for us to have the faith to believe that whatever God allows to happen in this storm, Jesus is still with us. It is he, not us who is in control.

Yet in the midst of storms good happens and there are signs of hope if we will only look at them.

A woman in Wuhan posted on Facebook a couple of days ago about the good her family has experienced since the lockdown. Here is a glimpse of what she said Her family has spent more time together and they have grown closer as a result. Her prayer life has never been better and she has become aware of the amazing community around her. She can hear the birds that are usually drowned out by traffic noise and the beauty of the spring bursting forth around her is magnificent.

In the midst of storms do you notice only the difficult things? What about the good? What have you already experienced that has been good in the midst of this storm?

My prayer today is that God will calm the storm and that we will be able to find rest and confidence in whatever that calming looks like. May we also notice the good of what God is doing in our midst.

Paul Neeley has put together a post of a variety of prayers that people have written as we face this storm. Take time to read through them and sit still allowing God’s calming presence to fill you.

Meditation Monday – What Do You Think of Mary Magdalene?

Dear Christine,
This is Nancy Litteken from Pasadena ( we were at your wonder retreat). I love this picture … could you tell me where you found it… or the artist and name?
Thank you so much for being a lovely voice in my life! I am in need of it and I am so very grateful.
Grace to you!

Nancy it is Storm on the Sea by Rembrandt. If you hover your cursor over the photo it should tell you.

The disciples should have on their minds what Jesus said: “Let us go to the other side.” Since it was true they should have know that there was noway the boat would capsize: If it did they could not get there. But, the circumstance of the severe storm got their attention since they did not know that Jesus could calm it. We need to keep in mind what Jesus has told us: Then, endure the problem.
I heart that Jesus’s compassion for the lost has motivated me to pass out Gospel tracts: door to door.
I have had to weather difficulties: #1 My wife could not drive me to the area beyond the closeness of the area to give them out. So, I had to walk perhaps, 2 miles to do it.
#2. I fell in the dark that made me fall off a sidewalk skinning my elbow. I could have gone home and care for my wound. If I did I could not continue because my wife would be so alarmed that I might do it again. So, I once again felt compassion for the lost which allowed me to finish taking them out to 7 other areas 60 tracts at a time.
#3 finances to do this. We have a fixed income that some of it may run out before we die. But, my motive is that I want to put my treasure in heaven. Then, live by faith obey Psalm 37 v 25: “I am 82 yrs old and have never seen my righteousness forsaken or my kids have to beg for bread.”: (I read this verse this AM in my devotions.)

When I was about to finish, I fell again. But, I have given out in some of these areas a Christmas card and Mardi Gras.
Next, I am writing a Resurrection Sunday tract entitled: “Power of the Resurrection” as stated by Paul in Philippians 3 v 10. I am doing it because I have never heard or read this in my past 66 yrs as a full time Christian.