Civil Rights…What Difference Can I Make? 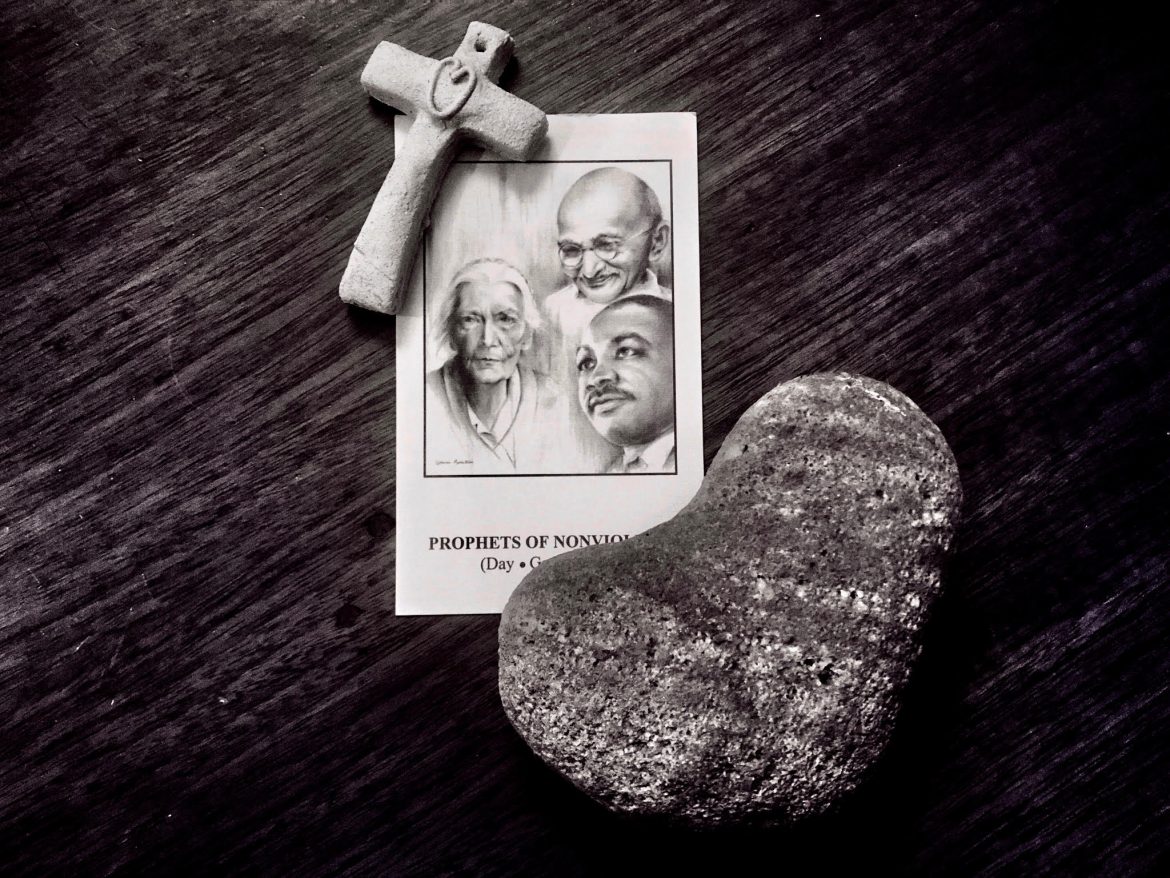 Last week my husband and I drove down the mountain to Fort Collins to attend the annual Dr. Martin Luther King, Jr. March & Celebration. I was really excited to gather with a diverse group of folks to celebrate the life of a man who was so instrumental in the Civil Rights Movement and also to bring awareness to the fact that much still needs to be done.

It doesn’t really seem like much. Most likely it won’t make a real difference in anyone’s life except perhaps my own. When I look at my heroes of activism like the ones shown on the card in the picture above, I am awed by the contributions they each made. The card was given to me by a dear friend and coworker who happened to be a dedicated activist herself and spent 50 years as a member of Sisters of St. Agnes. The heart shaped rock was left at my door years ago by two neighbor girls. It reminds me that my purpose is to love. Love fuels my desire for justice; it fueled Sister Judith’s desire for justice as well. What can I do? Can I really make a difference? There is no way I will ever be like Martin Luther King, Jr., Mahatma Gandhi, and Dorothy Day. Then I am reminded that I have been made for a purpose. We are God’s accomplishment, created in Christ Jesus to do good things. God planned for these good things to be the way that we live our lives. (Eph. 2: 10 CEB Translation) Perhaps my life destiny isn’t one of grandeur and fame. Truthfully, I’m fine with that but I do want to make a difference in my world.

Sometimes when we look at the great leaders in any movement, we asked ourselves, “What difference can I make?” The fact is, we many never know what impact our actions have on those around us. Dorothy Day said, “We can change the world. We can throw our pebble in the pond and be confident that its’ ever widening circle will reach around the world.”

A few years ago we went to the Martin Luther King, Jr. National Historic Site in in Atlanta, GA. This mural is painted on a wall at this center and serves as a backdrop to the statue of Gandhi.  This mural is a powerful reminder to me…Dr. King could not have done what he did without the thousands of “regular” folk who supported his leading. When you look at the this mural it highlights Dr. King but it also highlights all of the unknown people who marched and protested and sacrificed for the civil rights of others. Some of these people even gave up their lives for the cause. Regular people like you and me found the issue of human rights so important that they realized the good thing God had planned for their life was to live their life…walk daily…in pursuit of civil rights.

One such man was Jerry Pogue.  I had just been hired for the BEST job ever as the director of a small nonprofit called The Quest For Social Justice (now part of Mobile Interfaith Conference https://mobileareainterfaith.org/) and was attending a Bridges dinner that we sponsored.  The idea behind these quarterly dinners was that if people of diverse cultures gather around a table with facilitated discussion, bridges will be built. I was lucky enough to be seated at a table with Jerry. The topic that year was “law enforcement” and after a local sheriff’s talk about racial profiling, the table facilitator asked Jerry if he had ever been racially profiled. Jerry, a gentle giant with a deep southern voice, replied, “Well, I’ve been arrested nine times but it was always for something I did.” He went on to spend the next forty minutes telling stories of his work as an organizer for MLK. I kept pinching myself, amazed that I was getting paid for this sacred experience.

Jerry told us that of the nine times he was arrested he went to the emergency room three of those times before heading to jail. He had been beaten so badly that he required medical attention. I asked him how he took the beating without fighting back and he told us that he had literally grown up in a church. His father was a minister and he watched time and time again as his father helped people in need. He told us that as they beat him, he kept telling himself that there would be people in jail who needed his help and if he was in solitary confinement (where they would have put trouble makers) that he wouldn’t be able to help them. He also said that Dr. King had drilled it into them that if they fought back then they would negate the message they were trying to bring. “Nonviolence is a powerful and just weapon which cuts without wounding and ennobles the man who wields it. It is a sword that heals.”and “Nonviolence means avoiding not only external physical violence but also internal violence of spirit. You not only refuse to shoot a man, but you refuse to hate him.” Martin Luther King, Jr. Jerry was an ordinary man who did extraordinary things (you can read his obituary here which gives a detailed description of Jerry’s impactful yet ordinary life).

We don’t have to take great steps towards civil rights, we only have to take daily, small steps in our ordinary lives…and that makes all the difference.

Learning to Breathe with God

Reflection on Chinese New Year by a Diaspora Chinese in Asia